In July of last year we discovered meals from The Greek Table in the grab 'n' go section of the refrigerator case at a local grocery store chain.

These meals, a Vegetarian Moussaka and a Chicken Stifado, were labeled as containing two servings, when realistically they are single servings (and the nutrition information bears this out). While they were really pricy at $11.99 apiece, they were both amazing in terms of flavor and would be far better for you than just about anything you could get from a fast food joint.

Today we have three more meals from The Greek Table. While they've updated the appearance of their packaging, what's far more important, at least to us, is that now each meal is now labeled as a single serving.

First up was their Greek Chicken Bowl, which is described as "yellow rice, organic chicken breast in lemon tarragon dressing, & feta cheese." 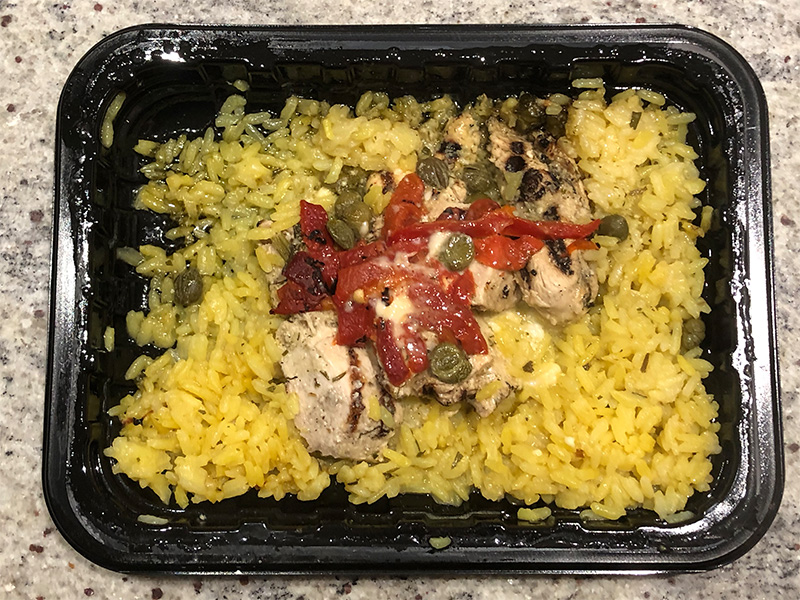 Just out of the microwave, this has a rich, umami and lemon scent. The chicken breast is clearly real pieces of chicken (as opposed to made of overly-processed chicken leftovers that are machine-formed), and the rice is well cooked (for parboiled).

While that chicken might be on the dry side, it's still fairly tender, and the roasted red bell pepper is soft and sweet while the capers add a distinct tart note.

That's the good news. The bad news is that this is sour, sour, sour. The lemon in the rice is nearly overwhelming, combining with those tart capers to make the dish far too vinegary.

The rice is incredibly greasy (see the top left of the picture). It's easy to see why this is so greasy, however: this dish has 43 grams of total fat. That means that 387 calories in this dish are from fat - or nearly 60% of the calories. A look at the Ingredients list shows extra virgin olive oil as the fourth ingredient, after water, chicken breast, and white rice. There's more olive oil in this dish by weight than any vegetable.

Like the Amy's we reviewed last week, The Greek Table could have added far more vegetables and cut back on the olive oil for a dish with more balanced flavors, less fat, and more fiber. We simply can't recommend this.

Next up was the Turkey Meatballs in Morrocan (sic) Sauce, which comes with "Israeli couscous with roasted vegetables." 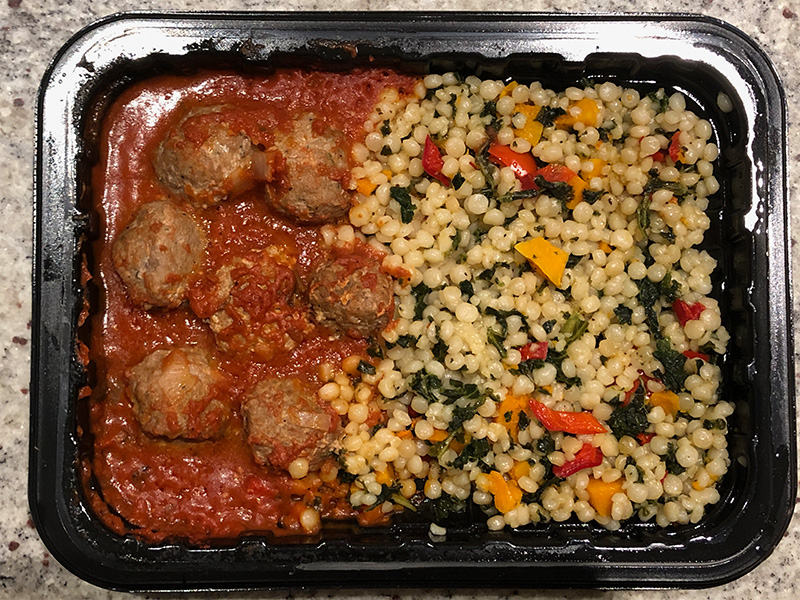 This looks quite promising, doesn't it - and at 530 calories, 510 milligrams of sodium, and 3 grams of fiber, is fairly promising on paper.

It has an evocative, cinnamon and chili powder scent, and we had high hopes as we dug in.

Unfortunately, another dud. A meal that's "all hat and no cattle." The best part of the dish are the meatballs: firm and tender but flavorful with the umami of turkey coming through nicely. Their sauce is all scent but no flavor.

The Israeli couscous is a great idea, with roasted butternut squash, red bell peppers, and diced kale, but the couscous is overcooked to the point of mushiness and the whole just seems... bland. This isn't nearly as greasy as the Chicken Bowl, but it still has 32 grams of fat (288 of its 530 calories from fat), which doesn't add much of anything to the dish's flavor. Another disappointment.

The last dish for today is the Lentil Spinach Shepherd's Pie with Grilled Vegetables. The Nutrition Facts on this dish are pretty promising, with 200 calories for the 13-ounce meal, only 3 grams of fat, 490 milligrams of sodium and 12 grams of fiber. 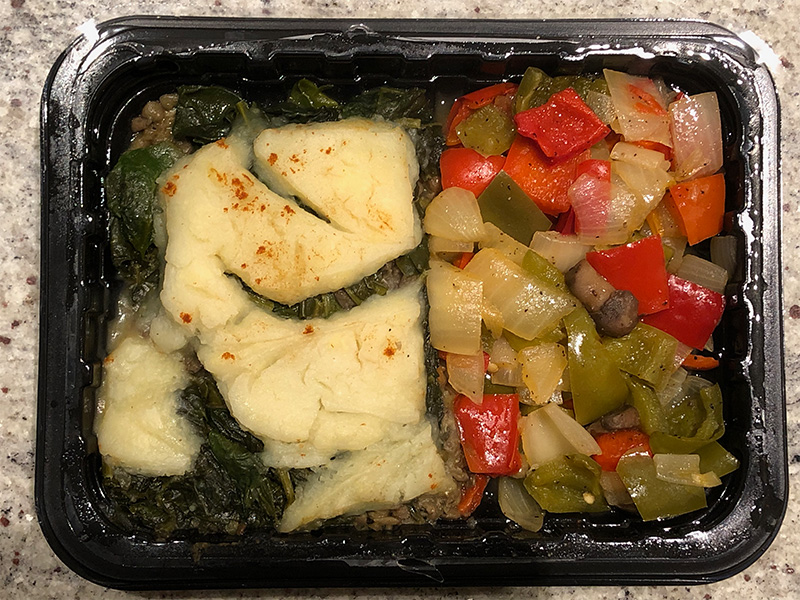 It's another dish that's well-designed - on paper. A thick layer of sauteed spinach is topped with smooth mashed potatoes, all over a substantial layer of green lentils (12 grams of fiber!). The grilled vegetables might not be grilled per se - more like sauteed - but a mix of red and green bell peppers and diced onions with a few mushrooms seems reasonable enough.

This is even more disappointing than the Meatballs or the Chicken Bowl. Last year we had their Vegetarian Moussaka, which is basically Greek Shepherd's Pie: that was layers of eggplant with a lentil sauce and mashed potatoes. It was far and away one of the best meals we've had out of the grab 'n' go aisle.

What happened, Greek Table? If there's anything in the world that needs a bit of salt, it's lentils, but there doesn't seem to be any salt in this dish to speak of. (Turns out it's the third-to-last ingredient, right before black and white pepper.) The mashed potatoes are smooth as you'd like and while you can see the paprika dashed over the top, you can't taste it. This is a dish crying out for some spice, and it just doesn't have it. My wife and I kept taking small bites in the hopes that we'd find something with flavor, but... nothing.

The sauteed vegetables seem to have been added because somebody in the boardroom felt like there had to be some sort of side dish with the Shepherd's Pie, and there were a bunch of peppers and onions lying around. Sauteed, yes. Still have crunch? Yes. A good side for the Shepherd's Pie? No.

My wife describes well-thought-out dishes in what she terms "the perfect bite." This means that everything on the plate is there for a reason: you should be able to put every element in the dish together and have it work harmoniously in the mouth. This doesn't. It's Shepherd's Pie - and it's sauteed peppers and onions.

At best the peppers and onions overwhelm the Shepherd's Pie, and that's not the point of a side dish.

Leave all three of these on the shelf - unless you find the Vegetarian Moussaka. Get that instead.