About a month ago we reviewed two meals from Healthy Choice that included their new packaging. You might recall me saying that with that new packaging, requiring "No poking, peeling or stirring needed!", I'd noted that they'd shot themselves in the foot when it came to the filled tortellini in one of the meals. The pasta sauce wasn't well distributed throughout the dish and some of the tortellini ended up dry little bullets.

This week we have two from their "Select Entrees" line, which still has the classic instructions requiring poking, peeling and stirring. This proves to be a good thing for the first meal we tried, the Ravioli Florentine Marinara. 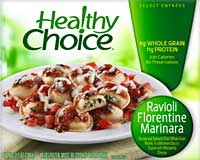 It's about what I'm starting to expect from Healthy Choice (and that's a good thing). Since the raviolis are stirred into the sauce halfway through cooking, they don't get dried out, although those that aren't well stirred in do get a little chewy. That said, these little pillows are fairly generously stuffed with ricotta and spinach and that holds up well to the fairly bright tomato sauce. That sauce suffers just a little from too much sweetness, but the oregano and chunks of tomato help quite a bit. 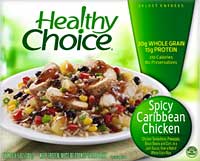 The Spicy Caribbean Chicken caught my eye because the label on the box touts "30g Whole Grain." Thirty? Really? That can't be right, can it? Apparently it can if they use brown rice. Brown rice!

Then I turned the box over and looked at the numbers. 310 calories, 5 grams of fiber, and 260 milligrams of sodium. Sounds too good to be true, doesn't it? Well, I'm here to tell you that it's (pretty) good and it's true. The jerk sauce mentioned in the description on the package isn't nearly as spicy as some jerk sauces I've purchased in the past, but it has just a bit of cayenne zing and a strong, pleasant scent redolent of cinnamon and orange. (With that sauce you certainly don't miss the salt.) While the chicken chunks tend to be rather dry, the pineapple's juiciness tends to make up for it, and the brown rice adds a nice texture to the dish.

What you do miss, however, is the flavor of the black beans and the corn. They're in there, alright, but unless you get just the right combination of elements on your fork they don't add much in the way of flavor. I think this dish could have used a little more of the red pepper to cut through the sweetness of the sauce and the pineapple, but overall I'd say this is also pretty good. Not great, but good. With the brown rice and the 15 grams of protein, this is a good pick for lunch at your desk. It'll keep you satisfied until dinner.