These guys have been around since the late 60's and I remember visiting them in Boston in the 1970's. They were one of the gold standard in seafood restaurants at the time. Their expansion in the 1990's and early part of the century brings them to about 30 restaurants up and down the East coast.

I have gotten pretty good at deciphering menus for gluten content and asking about how things are made, and more restaurants today are helpful for those who need to avoid wheat gluten. There is increasing awareness at chain restaurants, but Legal Sea Foods was a very pleasant surprise. Checking their Web site, I found a gluten free menu. On it was the following:

Legal Sea Foods has taken the necessary precautions to ensure that the following menu items and their preparations are free of elements that might cause a reaction for those with gluten sensitivity. If you have any concerns about any of these items, please consult your physician prior to trying them. For your safety, we WILL NOT substitute.

The menu suggests telling the manager or server, which I did at the hostess podium, and Aaron, the manager on duty, came to our table and told us that he would personally be following my order from the time it was taken, through the kitchen, and on to delivery. I was the only one in the tasting party who has celiac, and while it is sometimes tough to be singled out, this was really reassuring. I wasn't really sure I believed him, but it was a nice gesture.

The second thing that I noticed was that the restaurant was spotless. And it didn't smell of fish, but of herbs and fresh garlic. A big improvement. 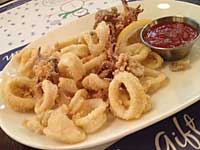 Amazingly, they have gluten-free fried calamari on the menu that uses brown rice flour and cornmeal as a coating. I don't often eat fried food, but I do like calamari and it is something I had to resign myself to avoiding when I was diagnosed with celiac. Aaron assured me that they take their gluten-free efforts seriously and fry their gluten free offerings in a single, dedicated fryer. This was amazing and the whole table loved the dish. The calamari was light and not greasy. The coating was great and didn't have that almost astringent aftertaste that white wheat flour can have. The flavor was really crisp and clean. 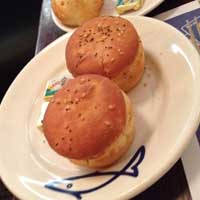 They also delivered some gluten free dinner rolls. This too, was a real treat. These are light and airy with a hint of whole wheat flavor.

Next up was the Lite Clam Chowder. There is little to be said for this other than clam chowder should never be "lite." Clam Chowder should only pack a big punch, whether it is of the Manhattan or New England variety. This soup was just plain awful and is a perfect example of a recipe that gives the phrase "healthy recipe" such a bad name. 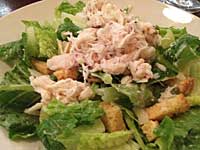 The awful soup was well compensated for by their Classic Caesar Salad. This was a serviceable Caesar topped with lump crabmeat. Usually chain restaurant salads are overdressed to the point of sloppiness, but this was spot on with a very light, creamy garlic flavor. The best part? Gluten free croutons made from the (I am presuming) leftover rolls. A great effort. 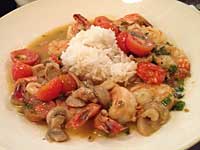 The Cioppino was pricy at $27.95, but there was the attraction of "lobster, scallops, shrimp, calamari, littlenecks, mussels and scrod in a light tomato broth with a side of jasmine rice." Just as one of us was saying that the dish should be served with brown rice, we noticed that they did have brown rice along with a lot of other healthy sides to choose from, including steamed broccoli and steamed vegetables.

This was a pretty amazing dish for a chain restaurant. Not too salty tasting and full of rich tomatoey flavor. None of the fish was overdone.

The rest of the menu is what you might expect from a good seafood place. They will broil, grill or steam almost anything you want, so all the usual suspects are there: shrimp cocktail, grilled salmon, lobster, clams, mussels, oysters.

We also sampled a piece of grilled salmon. This was really fresh tasting and cooked just right. The side of broccoli went with it really well and this pairing would make a great light meal for anyone.

If there is a downside beyond the awful clam chowder, it is that Legal Sea Foods doesn't make nutrition information available. We were guessing, but our tasting party knows a bit about calories and cooking. Nowadays it is really inexcusable to not offer this information. That said, sticking with the grilled fish is going to be the safest option, but a splurge on the calamari is OK every now and then.

What about Aaron? He was there every step of the way. He delivered some of our food himself and when he did not, he stopped at the table within a minute to check and make sure there weren't any problems with the food. He appeared to be engaged in making sure that no gluten got onto any plate or into any dish. Read more reviews from chain restaurants.