Chicken Fettuccine and Pasta with Ricotta and Spinach 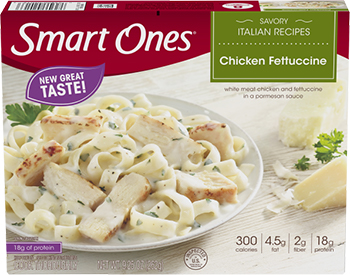 This week we are revisiting two meals from Weight Watchers' Smart Ones line. I noticed them because both bear the "New Great Taste!" banner on them. Of course it doesn't hurt that we last reviewed the Chicken Fettuccine in 2015 and the Pasta with Ricotta and Spinach in 2011. I would say it's time to revisit them.

Back in 2015 the Chicken Fettuccine meal had 300 calories and 670 milligrams of sodium, so you can certainly argue that it's improved since then based solely on the numbers, which are now still at 300 calories per serving, but with a significant reduction in sodium to 540 milligrams per serving. We should have noted the fiber content in the last review, but didn't, and today it is just 2 grams of fiber: about what you would expect for a single serving of pasta.

One thing that hasn't changed from the 2015 version of the meal is that there are still no vegetables to speak of in this dish. This factored into our thumbs down decision back then, as it was not only an incomplete meal, but the chicken was rubbery and also too salty-tasting.

As before, with today's version we were dubious about the chicken: while there seems to be significantly more chicken in this iteration of the meal, it's still clearly processed. On the other hand, it is rather tender and tasty with a fine chicken flavor - likely due to the processing and the number of additives (including modified tapioca starch, sugar, dextrose [another form of sugar], sodium phosphate, and modified potato starch). That said, this isn't any more processed than chicken we've seen in some other meals (I know; damned with faint praise).

The pasta is cooked just a little over al dente and the sauce has a fine garlic and parmesan flavor in a rich, creamy sauce. Better yet, some bright chef added a fair amount of black pepper to the sauce, giving it a brightness that the usual garlic-parmesan sauce might lack.

Did the panel give it a thumbs up? Back in 2011 they were on the fence: we don't like overly-processed meats, nor do we like dishes that don't include a vegetable component. On the other hand, today's dish is significantly better in both flavor and sodium content than the dish we tasted four years ago, so we are inclined to give it a judicious thumbs up. If you particularly like this meal, have it with at least a piece of fruit (at lunch) or a side salad (at dinner). If you haven't tried it before there are likely to be plenty of meals that are just as good, but with chicken that's far less processed. Have one of those instead. 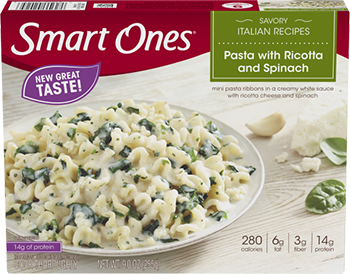 Back in 2011 the Pasta with Ricotta and Spinach had 280 calories, 630 milligrams of sodium, and 6 grams of fiber. Now it has the same number of calories with a lot less sodium - 510 milligrams - and the fiber has been cut in half, to 3 grams of fiber.

That's pretty interesting, because the amount of spinach in today's dish seems just as generous as the amount in the 2011 dish. Is this a correction? Were there fiber additives of some kind that we missed eight years ago? It hardly seems possible.

Back then we noted that the pasta was overdone and the sauce grainy. Today the pasta is much closer to al dente, but still done more than we'd like, and the sauce still appears grainy. The problem is that the label might seem a bit misleading: it says "Pasta with Ricotta and Spinach," which implies that the ricotta is more prevalent in the sauce than the spinach. Not so! This is much more of a sauce made of chopped spinach with a hint of nutmeg and a slight backgroun flavor of ricotta. In fact, I wouldn't really call this sauce "creamy" at all.

Again, do we give it a thumbs up or a thumbs down? The panel felt that this could be given a thumbs up as long as the purchaser didn't expect "a creamy sauce that happened to have some spinach in it." If you like spinach and you like pasta, you'll enjoy this. Just don't expect it to be what it's not.

Read all reviews of Weight Watchers' Smart Ones products »