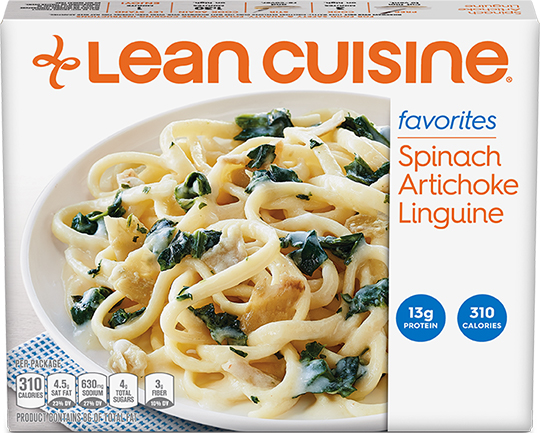 A couple of weeks ago I was in a Giant Foods store here in the Washington, DC metro area and noticed a whole new line from Lean Cuisine: "Lean Cuisine Bowls". These are touted as containing 20% more food than their corresponding standard Lean Cuisine offerings. That might be true, but we won't be reviewing any of them.

In the past year or so I've noticed a trend toward single-serving frozen meals that are marketed as bigger and more filling, with more calories and certainly more sodium than the typical frozen meals: Devour® is one example. These might seem healthy, as they are marketed as being high in protein, but a closer look at the nutrition information of the varieties shows that they tend to be higher in sodium as well as fat. Sure, they might be satisfying. Good for you? I would contend not.

We chose to review the linguine first. We took the plastic dish out of its box, and my wife said, "That looks like a lot of food." She's seen more than her fair share of frozen meals throughout the years, and I have to agree: this meal does not seem skimpy in the least.

After 4+ minutes in our microwave (turning halfway through and stirring as instructed), this is "a surprisingly appetizing-looking dish." 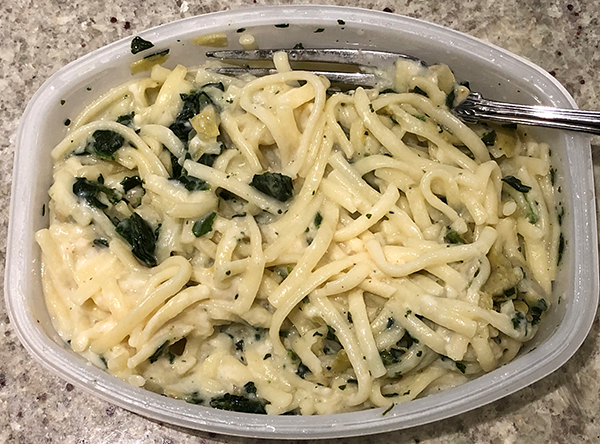 We stirred it up and looked at each other: "I'm betting the pasta is mushy," my wife said.

I can't taste it, so she went ahead with her commentary:

"I see a lot of artichoke leaves, but I'm not sure about actual artichokes."

(After trying a bite of pasta alone:) "Okay, this [pasta] is a little more [cooked] than al dente. About the best you could expect out of a frozen meal, I guess."

"These artichoke leaves are nice and crunchy and have a good, tart flavor. The bitterness of the spinach cuts through the creaminess of the sauce. "

But then, the sauce: "You know, the sauce. It's nice and thick - and I guess part of that thick and creamy mouthfeel is the cornstarch in the ingredients - but I feel like this is more mouthfeel than flavor. It's creamy in the mouth but it's not very cheesy. It's more cheese-scented, actually.

"It does have good spinach and artichoke flavor, though, so if you're more about the spinach/artichoke than the cheese you'll be happy with this one."

We give this one a thumbs up. 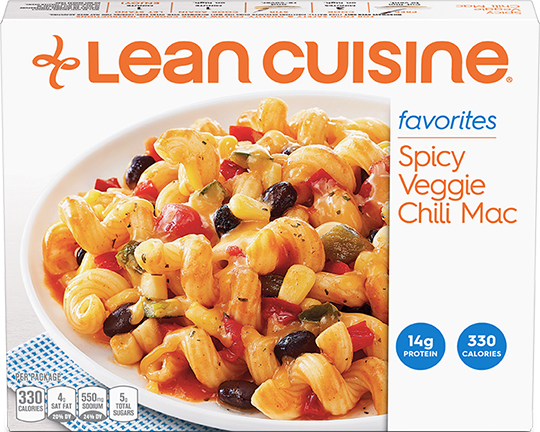 We cooked this dish according to the instructions and the first thing my wife said was, "How is this 'Mac'?

"You tell me this is 'Spicy Veggie Chili Mac' and I am expecting a bowl of Mac and Cheese with chili involved. What is this? There's hardly any cheese here at all." 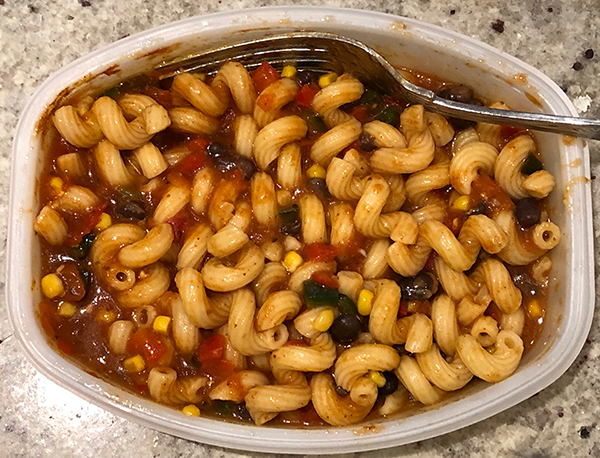 Reading the Ingredients list is a clear indication that this is no "mac and cheese": the list starts with pasta and is followed by tomato puree, tomatoes, and then cheddar cheese and the other ingredients. While the cheddar cheese is indistinguishable from the other ingredients (just look at the picture), the tomato puree and tomatoes are clearly the vast majority of the dish. In fact, "it's basically Southwestern-flavored tomato soup with pasta."

The black beans are actually a little undercooked, according to my wife, and are sometimes a little crunchy. But the poblano and ancho peppers give the dish a lively spice that's punctuated by the sweet crunch of the corn kernels. It's still more like tomato soup with pasta than pasta with a sauce you could expect to cling to the pasta, however. It really feels more like soup with added pasta than a pasta dish.

In short, this is "just not well-conceived," my wife said. "If you'd told me this was pasta with a Southwestern sauce I might still think there should be more cheese than advertised, but I wouldn't be quite so disappointed. This isn't 'Spicy Veggie Chili Mac' by any stretch of the imagination."

We decided to give this a thumbs down as it doesn't really work well no matter what you call it.