Red's All Natural started its business with burritos and only recently branched out to entrees.

What's impressive about this company is that every burrito but one that we've reviewed from them has received a positive review, along with 2 of 3 of the entrees. That is: Red's All Natural has an 80% success rate with us. That's pretty impressive.

Last week we had two burritos from Daiya Foods, and only out of necessity (frozen meals that meet our criteria are getting harder and harder to find in these pandemic-stricken times) do we have two more burritos.

Unlike last week's burritos, however, these are not gluten-free: thus my wife will be doing the actual tasting, with both of us providing the, er, color commentary.

Red's All Naturals includes both conventional oven as well as microwave oven instructions for cooking its burritos: naturally we cooked ours in the microwave. The instructions are to place the unwrapped, frozen burrito on a microwave-safe plate, loosely cover with a plate or bowl (we used a plastic food storage bowl turned upside down), and microwave on first one side, then the other, for one minute each. Allow the burrito to stand for one minute, then serve.

It does seem to me that this method helps reduce the amount that the tortilla dries out, by keeping most of the moisture around the burrito as it cooks. Yet it's not a perfect solution as it simply delays the inevitable.

The Canadian Bacon Burrito (340 calories, 550mg sodium, 1g fiber) is impressive right out of the microwave: it doesn't split, isn't more than a little slimy on the side last turned to the bottom, and the tortilla seems only a little chewy where there are multiple layers of tortilla (this is to be expected). 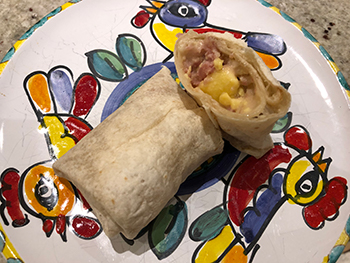 The filling is also impressive: the list of filling ingredients has Uncured Canadian Style Bacon as the first ingredient, which means there's more bacon by weight than there are eggs or cheese. ("Which ought to make bacon-lovers happy," my wife remarked.)

The scrambled eggs are as fluffy as you could reasonably expect from a frozen product, and "to be honest the label is accurate: bacon with egg and cheese - in that order." There might be three cheeses listed in the ingredients, but my wife couldn't detect any particular flavor other than the pepper jack. "It doesn't matter," she said. "This is basically a Canadian bacon burrito with creamy scrambled egg and some cheese."

"It's a little salty," she went on, "and the tortilla gets tough pretty quickly, but if you eat it fast and you like bacon, this is quite good."

We had higher hopes for the Egg & Ranchero Sauce Burrito (310 calories, 560mg sodium, 4g fiber), mostly because we noted that the ingredients list states specifically that this tortilla is made from whole wheat flour.

The cooking process was rather disappointing, however. The burrito split at one end, just enough to make a bit of a mess in our microwave. This was accompanied by a puddle of clear liquid - presumably left over from the transition from frozen to cooked. After we poured away the liquid and cut the burrito in half, this is what we saw: 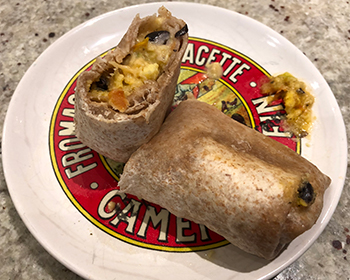 We read the ingredients list while the product cooked, and were a little disappointed to see how few black beans there really were in this burrito. They add nothing to the dish.

On the other hand, the scrambled eggs here are as fluffy as those in the Bacon Burrito and are accompanied by diced green chiles and cheese. My wife said that the flavor reminded her of a beloved quiche dish her mother served in the 60's and 70's made with tons of cheese, eggs, and canned green chiles (a good thing).

On the edge of disappointing was the whole wheat tortilla. This toughened up even more quickly than the flour tortilla in the Bacon Burrito and we have no explanation as to why this happened. In my wife's opinion, this is another one to eat quickly (to prevent the tortilla getting tough), but both would make a decent breakfast "if that's your thing."

See all reviews of Red's All Natural products »