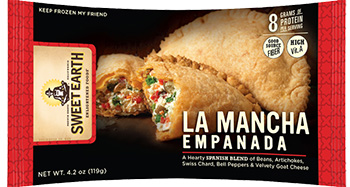 Last week we talked about the problem with smaller frozen food companies being sold to larger ones, and mentioned evol. Foods as an example. With that company, it's hard to decide whether the cause of their decline was the sale of the company or the fact that they strayed out of their core competency.

Their burritos and bowls were great, early on, but once they branched out into mac and cheeses, pastas, and breakfast sandwiches, it was clear (at least to us here in the Dr. Gourmet Tasting Kitchen) that they had lost their way.

When I saw today's empanadas from Sweet Earth Foods I hoped the same thing hadn't happened. But we think the same thing every time we encounter another new type of product from Sweet Earth, and in addition to the burritos (which have all gotten two thumbs up), we enjoyed their breakfast sandwiches and were even impressed with their bowls. To be fair, those bowls are basically their burritos sans tortilla - but if evol. had done the same thing they might not have as many negative reviews.

Empanadas have their origins (according to some sources) in Spain and Portugal: the name supposedly comes from the verb empañar, meaning "to wrap" or "swaddle" - essentially, to wrap something in bread. You might see these as similar to an Italian calzone or panzerotti. We'll hold off on the culinary history digression, however, and say that an empanada is basically a filling sealed in a pastry-like dough, usually in the shape of a half moon (a half circle). Some empanadas are fried but many are baked, and the empanadas from Sweet Earth give you three options for cooking: baking completely in a conventional oven, microwaving and then finishing in a conventional oven, or fully microwaving. As usual, we chose the wholly microwaving option based on the assumption that most people are eating frozen meals like these for lunch at work, where it's extremely unusual to have access to an oven.

Each empanada is cooked exactly the same way, regardless of variety, and the microwave directions tell you to place the individual empanada on a paper towel and microwave it on high for 90 seconds. We chose to place them on a paper towel on a plate in the microwave, which was a good decision: all three split down the side of the empanada, although only two actually disgorged some of their contents onto the plate.

All three of the empanadas come wrapped in the same pastry: a tender, yeasty, whole wheat shell with a fine crumb and a buttery flavor. We don't doubt that baking these in a conventional oven would yield a crispy outside and a tender inside, but we didn't test it ourselves - if you do, please comment with your results.

There were three varieties of empanadas on the shelf, so I picked up all three for today's review. The panel chose to review these in order of their level of sodium: from lowest to highest. That meant the first variety was their La Mancha Empanada.

The labeling emphasizes white beans, but we found that the initial flavor is of sweet-yet-vinegary artichoke, followed by savory mushroom. The white beans seemed to have been subsumed into the goat cheese, giving the filling a thick creaminess and a savory mouthfeel. There's plenty of filling (as with Sweet Earth's burritos), so you don't feel cheated at all. The panel noted that although it only has 200 milligrams of sodium to go with its 310 calories and 4 grams of fiber, the bright vinegar note of the artichokes means the dish tastes plenty salty enough. Good stuff, they said. 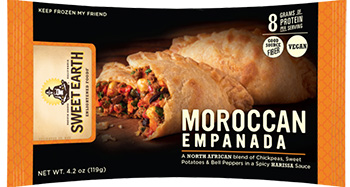 The Moroccan Empanada, on the other hand, we just didn't understand. This is billed as being "made with sweet potatoes, chickpeas, olives and raisins in a spicy Moroccan harissa sauce." We could see the whole chickpeas in the empanada (we cut them open with a knife and fork) so we expected something along the lines of a chickpea stew, with savory chickpea and olive flavor and spiced with harissa. That's how it smells, but what we tasted was a sweet, dry, sticky filling that according to one panelist "tastes mostly of sweet potato, olives, and raisins." There's a slight harissa afterburn, but overall the panel was turned off by the sweetness. "Not enough harissa savor and way too much sweetness," summed up the panel. (270 calories, 350 mg sodium, 5g fiber) 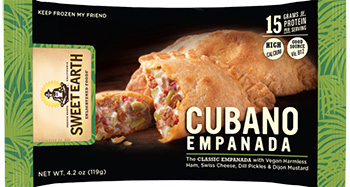 With that disappointment we turned to the Cubano. Sweet Earth uses their Harmless Ham® to good effect here, creating "basically a Cuban sandwich in an empanada." Our panel said, "You could hardly ask for more. Swiss cheese, ham, a few pickles, and a touch of olives - it's a Cuban sandwich. What's not to love?" When pressed for a fuller description, they said that the "ham" would fool "anyone," there's "tons of Swiss cheese," and "just enough pickle and Dijon mustard for flavor but not enough to overpower the ham and Swiss." Every thumb at the table: up. "Do we have more of these?" (350mg calories, 520mg sodium, 3g fiber)

Sweet Earth Foods lists these in their "Mini Meals" section of their website, which implies that they are a snack and not a meal. Given that the nutrition information on these empanadas are not materially different from the nutrition information on their burritos, I would like to remind you that the company (whether it's Sweet Earth Foods or McDonalds) might label it a "snack," but for lunch you should consider something between about 200-400 calories as a meal and not a snack. That said, if you choose your lunch wisely it will be just as satisfying as something with more calories. The La Mancha or Cubano Empanadas we reviewed today would be great lunches with a piece of fruit.

Read all reviews of products from Sweet Earth Foods »