The only time we reviewed products from Daiya Foods was in 2016, when we tested two varieties of boxed mac and cheese. Daiya's tagline is "deliciously dairy-free," but their products are also free from gluten, soy, eggs, peanuts, fish, and shellfish. For a while afterwards all I saw on offer from Daiya - at least, in my local grocery stores - were either ingredients (such as vegan cheese, spelled "cheeze") or dairy-free desserts like "cheezecake".

I'm not a big sweets eater under most circumstances, and to be honest, desserts are a bit outside of the Dr. Gourmet Food Reviews scope: we are most interested in frozen meals, not desserts. After all, desserts shouldn't be a part of your daily life, in my opinion: they should be reserved for special occasions.

But since my wife and I moved to Washington, DC, we have seen burritos from Daiya in the freezer case. While their mac and "cheeze" might not be that great, who knows? - their burrito game could be on point. We've had good gluten-free burritos before, after all.

For our tasting session we started with the Santa Fe Burrito. Both of the burritos we reviewed today are cooked in identical fashion: a minute and 15 seconds in the microwave, turn over, repeat.

Judging burritos is rather more than simply asking, "Does it taste good?"

In addition to flavor (and whether it meets our nutritional criteria, without which the item wouldn't be reviewed at all), a burrito has to meet "Burrito Criteria." (Blame my wife for the terminology.)

Apart from containing only one serving, having a reasonable amount of sodium (varying as to the number of calories but generally under 650 milligrams of sodium for a 300-calories "meal"), and actually tasting good (undetectable until actually cooked and eaten), we here at Dr. Gourmet believe that frozen burritos have a higher calling than your typical frozen meals.

Or at least, additional criteria. That is, burritos should be something you can microwave (according to package instructions), allow to cool for a reasonable amount of time (a minute or so), then pick up in the hand to bite into.

"If you can only use a knife and fork to eat a burrito, the manufacturer has done it wrong," my wife says. Ideally, the tortillas encasing the burrito should not split upon cooking and should not be slimy or otherwise off-putting when one picks them up in the hand to eat them.

The good news is that the two burritos from Daiya that we reviewed today perform fairly well in terms of holding: While the Santa Fe Burrito split a little bit on cooking, that's not necessarily a deal-breaker on its own - you can still pick up the burrito and bite into it. 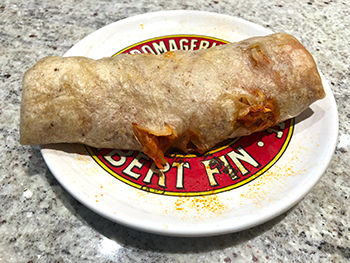 According to the ingredients listing on both burritos, these tortillas are made primarily with brown rice flour along with chickpea flour and other gluten-free ingredients. The encasing tortillas are also tough enough to stay fairly well together while cooking - the Santa Fe burrito had a minor blowout while the Santiago did not - and have a bit of a tender bite, at least while still hot.

That said, as with many frozen burritos, the tortillas get tougher as they cool until the resemble nothing so much as 1/8th inch sheets of rubber.

Where these really fall down are the fillings.

The Santa Fe Burrito (400 calories, 690mg sodium, 3g fiber) is described as containing "meatless beef style crumbles, brown rice & potatoes," as well as "mozzarella style shreds." In actuality this means that the contents of the burrito is a lot of reddish-orange... stuff... cut into 1/8-1/4 inch dice... that tastes of "way too much" chili powder and has the texture of old pencil erasers.

That's the good news - that several of the ingredients are identifiable in the product. (In fact, the Daiya website uses a beauty shot of the Santiago Burrito for every one of its 6 varieties of burrito - regardless of whether the burrito in question includes quinoa, black beans, and sweet potatoes or not.)

Worse yet, there are no tomatillos listed on the ingredients list. There are poblano chiles, but no tomatillos. I hope I don't need to say that I can taste the difference between poblanos and tomatillos, but there - I've said it.

Bottom line: the tortillas encasing these burritos could be good with decent fillings. Neither of today's burritos fit that description. They aren't bad, but they aren't good. Find something else, even if you do have to eat it with a fork.