We reviewed two of Saffron Road's "Artisan Wraps" a couple of weeks ago, with great results. As it happens, we ran across the third variety, a Bean & Cheese Artisan Wrap, this week, and it seemed only fitting that we revisit other bean & cheese burritos/wraps along with it. Which would have the best flavor?

We're betting on Saffron Road, but Red's All Natural started out making burritos. 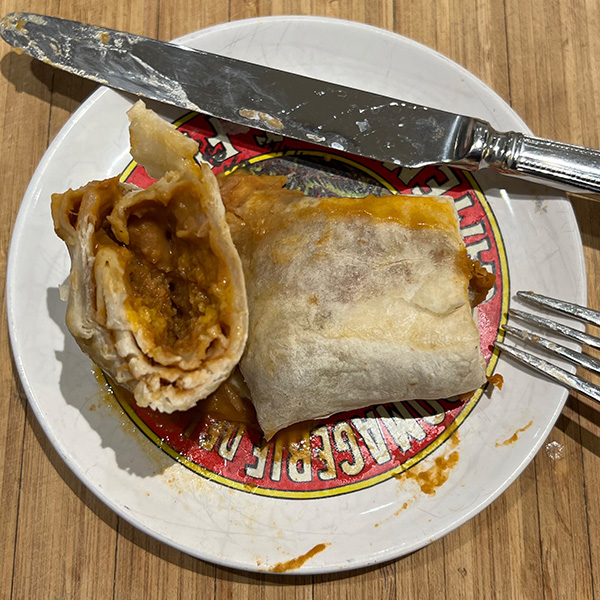 Now it has 320 calories, 570mg sodium, and 4g fiber. Of the three burritos we reviewed for today, this cooked in the microwave the best - that is, with the least amount of mess: just the smallest split in the side (at the top center of the photo). The tortilla remains soft far longer than the other three burritos, as well.

This is still an extremely mildly spiced bean burrito that, well, it's basically the refried pinto beans you get from a hole-in-the-wall Mexican restaurant: almost perfectly smooth and creamy with just the lightest flavor of beans, very little cheese flavor, and far less spice than the lengthy list of ingredients would have you believe. This is a very serviceable burrito but its flavor is almost bland.

The second Bean & Cheese Burrito we tasted comes from Red's All Natural. We last reviewed this in 2012, so the best information we have is that it had less than 350 milligrams of sodium to go with 510 calories. Now it has just 330 calories, 550mg sodium, and 4g fiber. 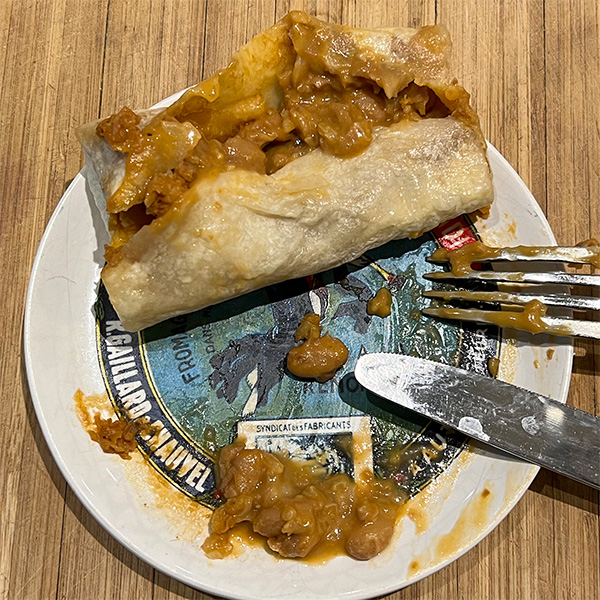 Unfortunately, unlike last time we chose to microwave the burrito completely rather than using the conventional oven. Clearly a mistake as the entire burrito split down the side, making it impossible to pick up.

Also unlike its 2012 iteration, this isn't made with black beans but is now pinto beans. Nor are there any vegetables such as green and red bell peppers or onions to be seen. Yes, this still has brown rice, so it has a more substantial mouthfeel - and the beans are not quite smooth - but the filling has much the same flavor as that of the Whole Foods burrito, if just a tiny bit spicier.

Finally we got to the Saffron Road Bean & Cheese Artisan Wrap.

And it's not what we expected. 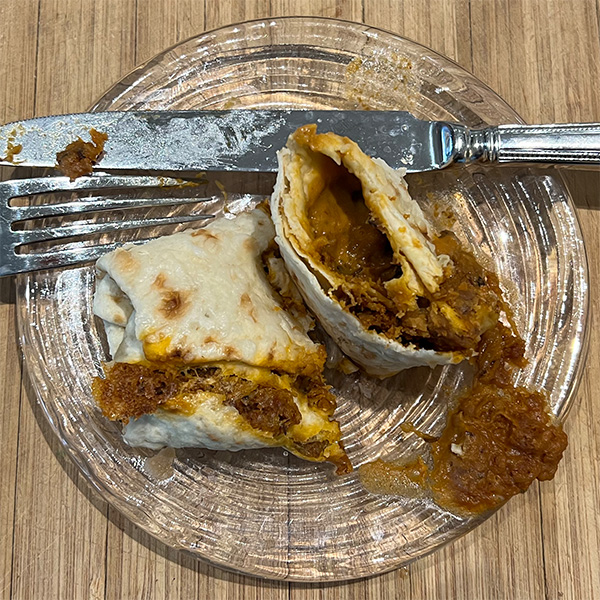 This has the same tender wrap as those we reviewed a couple of weeks ago, and this didn't split as much as the Red's (but more than the Whole Foods). Yet this is by no means a burrito, which, to be fair, it never said it is.

Instead of black beans or pinto beans, these are black-eyed peas cooked down to softness in a tomato and onion sauce. Monterey Jack cheese might be the third ingredient in the filling, but its flavor is lost completely.

We found the flavor to be a bit odd. Yes, you can taste the black eyes, which do have their own specific flavor as opposed to black beans or pinto beans. But the sauce is rather sweet: it relies heavily on cinnamon and allspice with just a touch of ginger and cumin - plus some chili for that back-of-the-tongue slight tingle.

That sweetness, combined with the somewhat grainy texture of the filling, leads us to recommend that you leave this one on the shelf in favor of one of the other two Saffron Road Artisan Wraps. And of the other two bean burritos we tested today, we like the Red's flavor better than the blander Whole Foods version. It might be best to use the conventional oven directions.