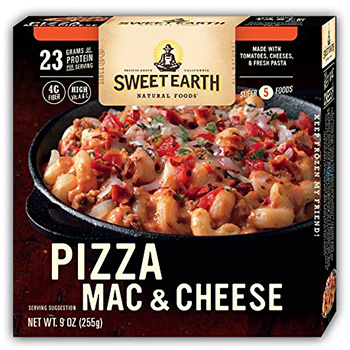 I was pleased to find today's Sweet Earth Natural Foods bowls in addition to the Sam's Choice meals we picked up at our last trip to Walmart. If you've been following our reviews for a while, you probably know that Sweet Earth Natural Foods has a truly enviable reputation around the Dr. Gourmet tasting table. Only two of their products, both veggie burgers, have received thumbs down reviews from us.

We have learned through sad (and less-than-tasty) experience that too often when a frozen food company ventures away from its core burrito competency (ahem, evol Foods), that can herald a significant decline from the quality we'd been used to. While our tasting panel has been curious about Sweet Earth's bowls, their arrival at our table was met with a fair amount of skepticism. Could their bowls hold up to their burritos?

The Pizza Mac and Cheese bowl starts out with good numbers - 350 calories, 580 milligrams of sodium, and an impressive 4 grams of fiber (for a pasta dish!), but the panel was a little perplexed to see that the package claims that it contains "5 super foods," which are (apparently) red bell peppers, fennel, tomatoes, basil, and garlic. (Said one panelist, "I see just three superfoods: pizza, mac, and cheese.")

After three minutes in the microwave and a minute standing, we had... Pizza Mac and Cheese. ("Whoo-hoo! Truth in advertising!")

Sweet Earth makes seitan (a vegetarian protein source) crumbles in various flavors, and in this bowl they've put their Tuscan Savory Grounds to good use, filling in for both sausage and ground beef to good effect, with the aromatic bitterness of fennel, the sweetness of basil, and the savor of oregano. The tomato sauce incorporated into the dish has a fine roasted tomato and red bell pepper flavor with just enough tartness to hold its own against the "meats."

The only down side is that the pasta (cavatappi in shape, not elbows) is a little overcooked, but that's par for the course with microwaved mac and cheese. And speaking of cheese, there's plenty of mozzarella here to stretch between your fork and the food. "Possibly the best mac and cheese we've ever had," said the panel. (They also noted that Pizza Mac and Cheese would be a great Dr. Gourmet recipe idea: "As good as Cheeseburger Mac and Cheese." I'll take that under advisement.) 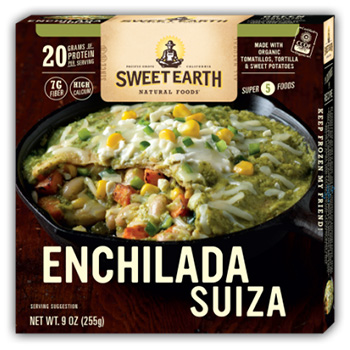 After that truly impressive start we approached the next dish, their Enchilada Suiza, with even more caution. Off the top of our collective heads we could think of at least two other frozen food companies who did a version of this dish, but Sweet Earth Foods certainly takes its own approach.

First, this is not, strictly speaking, an enchilada. "Enchiladas are rolled," said the panel quite firmly. "And they don't have sweet potatoes in them. At least, not usually." This is more tostada-like, in truth: it's a dish of beans, diced sweet potatoes, corn, and diced onions in a tomatillo sauce topped with a substantial corn tortilla laid flat on top, then covered with Jack cheese.

Whether it's an enchilada per se aside, I have to admit, this smells fantastic (neither of these dishes is gluten-free). The tomatillo sauce has a fresh, bright note of lime and cilantro and the scent of corn from the tortilla cuts through with savor and sweetness. The sweet potatoes have a little more crunch than we expected, and also add a little sweetness along with the roasted corn in the dish, and the white beans are thick and savory. Despite the diced poblanos, the overall effect is not that spicy: "It's actually very mild," said the panel, who voted for a thumbs up for this meal as well. At 350 calories, only 430 milligrams of sodium, and 6 grams of fiber, the numbers are better for the Enchilada Suiza, but of the two, the panel preferred the Pizza Mac and Cheese, if given a choice.