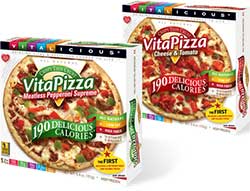 Vitalicious was originally in the muffin-top business. They make low-calorie muffin tops (VitaTops), muffins (VitaMuffins), small cakes (VitaCakes), brownies (VitaBrownies)... you get the idea. The company's focus is on baked goods that are low in fat, high in fiber, and fortified with vitamins and minerals. We've never reviewed their offerings for two reasons: we rarely review desserts of any kind, and if you're going to eat a muffin, I feel that making your own from fresh ingredients is preferable to buying one off the shelf.

They got our attention, however, when they entered the frozen pizza market. Vitalicious has starting making (surprise!) VitaPizzas. The two varieties are touted as having "190 delicious calories" and both have an amazing 19 grams of fiber each. 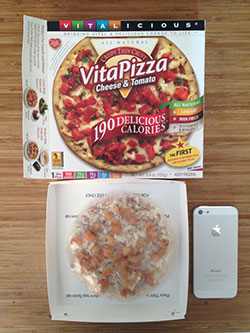 We started our tasting session with the Cheese & Tomato pizza. Take a look at the picture at right to see what we saw - that the size of the box is not a good reflection of the size of the pizza. "Yep," said one taster. "If it's the size of my iPhone, it's probably less than 200 calories."

Like other frozen pizzas, these come with a silvery-backed tray for use in the microwave to help crisp the crust. The crust on these pizzas is thin and crispy, yet slightly grainy, with a light whole wheat flavor. It's not so crispy as to make you think "cracker," however - this put the panel more in mind of a pita round. The flavor of the sauce is helped along by the chopped tomato, giving it a bright, roasted tomato flavor. There's not much cheese however - just enough to convey a cheesey flavor but not nearly enough to really be able to see the cheese once it's melted.

As the pizza cooled we noticed that the crust, which started out crispy, became more and more tough and chewy, to the point that at room temperature the pizza really gave your jaw a good workout. This is not a pizza you want to have cold!

We were hopeful for the Meatless Pepperoni Supreme, as it looked to have a greater topping-to-crust ratio. Certainly this pizza appeared to have a slightly thinner crust than the Cheese & Tomato version, and indeed, it did not become tough as it cooled.

Once again the cheese is nearly invisible after cooking, but the red and green bell peppers were evident and flavorful and there are a few bits of mushroom. The tomato sauce has a nice red pepper flake zing. But where was the pepperoni? No familiar round discs were visible. A look at the ingredients showed us the following: "Meatless Pepperoni (Water, Vital Wheat Gluten, Unbleached Whole Wheat Flour, Herbs and Spices, Natural Flavors, Soy Sauce, Yeast, Natural Coloring)." It would seem that the Meatless Pepperoni is more pepperoni flavors than a vegetarian deli meat.

Overall, while the numbers are really good (460 milligrams of sodium in the Cheese & Tomato pizza and 490 milligrams in the Meatless Pepperoni Supreme), we can't recommend them as pizza. Flatbread with toppings, maybe, but not pizza. Here's our list of pizzas we've reviewed in the past - you're sure to find one of our recommendations that you'll like, too.