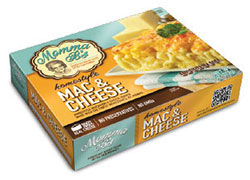 People do love their Mac & Cheese. From Kraft's version with day-glo orange "cheese" to the most decadent lobster mac and cheese with black truffles sold at high-end restaurants, this comfort food comes in just about every variety you can imagine (and some you really don't want to). We here at Dr. Gourmet have tested quite a few, but even so people keep bringing new varieties onto the market.

One that just came on our radar was through an email sent by Carol M. of Lafayette, Louisiana, asking what we thought of Momma B's Mac & Cheeses. "At $3.99 apiece at Winn-Dixie I'd rather know if they were any good before I let my kids eat them," she wrote. While for $3.99 per serving you could make a lot of home made mac and cheese, one of the reasons we do reviews of frozen foods is because we realize that life isn't perfect: you don't always have time or the inclination to cook, and when you don't, a lot of people eat frozen foods. We test those frozen foods for you so you can make the best decisions about which frozen foods you're going to eat. 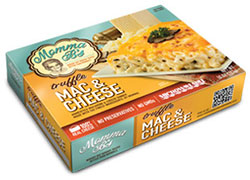 Momma B's is based in Florida and started out in 2012 with three versions of Mac & Cheese, with a Chicken & Biscuit Pie and a Chicken Alfredo following a year or so later. While the latter two weren't on the shelf in our local Winn-Dixie, the three mac & cheese versions were.

I will note that in addition to the comparatively high price of these meals, all three versions are near the top of our acceptable sodium levels at 670 milligrams per serving or more. But if you, our readers, ask for it and we can find it, we'll review it unless the sodium content is really outrageous.

We started with the Homestyle Mac & Cheese for a baseline and noted that the meal is topped with a generous portion of shredded cheddar-looking cheese. Although the instructions state that "Momma recommends baking for best results," as is our custom we opted for the microwave instructions. After 5 minutes in the microwave and a minute of standing, we were confronted with a dish with cheese crusted around the edges and gooey to the point of greasy in the center. Scoop out a bite then tilt the package to one corner and you can see the liquified fat drain to the corner. This is taking full-fat cheddar cheese, melting it until it separates with the liquid fat dripping off it, then eating it on top of mushy, overcooked white pasta (with a whopping 1 gram of fiber). This has (ugh!) 28 grams of fat per serving and every bit of it shows. Leave it on the shelf. Gross! 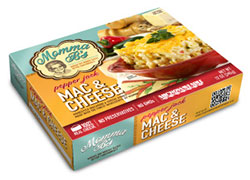 After the first one we were not looking forward to the other two, but we pressed on. The Truffle Mac & Cheese is also high in fat at 29g (18 of them saturated fat), and this time, before even taking a bite, we tilted the package and were able to pour off about half a teaspoon of oil. This was not looking promising. In this dish the cheese appears to have fully separated, leaving a sea of oil and a bunch of white curds with the aroma of black truffles. Yet as we saw with evol Foods' Truffled Mac & Cheese, truffles alone can not save you, and they certainly didn't this time. Once again, this is a sea of grease over mush. Avoid, avoid, avoid.

After the first two none of the panel really wanted to go on to the third variety, Spicy Pepper Jack Mac & Cheese. Yet again, we persevered, mostly for the sake of completeness. While we couldn't quite manage to pour off any liquid fat, it was visible in pools across the top of the dish. The cheddar cheese here is mixed with Monterey Jack and cream cheese, which is probably why the cheese sauce did not seem quite as separated as were the other two. No, wait, after stirring (the instructions quite specifically state, "DO NOT STIR") we could see the separating beginning. I won't even bother to report on what our panel said about the flavor: don't eat it.

But wait: it gets worse.

Carol, I hate to tell you this, but while these are $3.99 apiece, they are not single servings. These little 10- to 11-ounce boxes are actually "about 2" servings, meaning each single, small package contains over 800 calories, close to 60 grams of fat, and over 1200 milligrams of salt. I have no words for how awful these are in terms of simple numbers, let alone taste. Apparently Momma B's gives a portion of their profits to diabetes organizations: they should. Stay far, far away from Momma B's.