If a Million Monkeys Sat at a Million Typewriters for a Million Years....

You know: they're supposed to come up with the complete works of Shakespeare. And Lean Cuisine puts out so many frozen meals that despite their track record here at Dr. Gourmet, they should come up with one or two that are pretty good. Right? Hold that thought.

Fish is so good for you that a convenience meal with fish in it would really be a great help for those who have a hard time finding the time to cook. I can understand why they're so hard to find, however. Fish just doesn't generally reheat well unless you cook it very carefully in the first place. My Saffron Salmon Risotto is a good example of this. It was created specifically for a patient who did shift work and often ate her main meal of the day out of the microwave. This recipe was designed so that when it was reheated the fish didn't become mushy or break down. 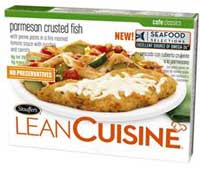 The good news is that Lean Cuisine appears to have conquered the problem of reheating fish (because face it: convenience meals are basically leftovers in a box). Their Parmesan Crusted Fish instructs you to pull the plastic cover back so that the breaded fish is uncovered when you put it in the microwave. This serves two purposes: it helps to make sure the fish is heated through and it attempts to make sure that the breading on the fish doesn't turn into mush. While the first succeeds, the second doesn't. The fish itself is cooked appropriately and is, to my surprise, an actual piece of fish. It flakes well and tastes like actual fish. The breading, unfortunately, is a gooey, flavorless mess.

Adding insult to injury, the pasta that comes with it is covered in a too-sweet tomato sauce that is described as "fire roasted" but bears no resemblance to fire roasted anything (OK, the tomatoes definitely resemble tomatoes). The penne is mushy and there's no evidence of the parmesan cheese that you can see sprinkled about when you initially open the package.

Verdict: feed it to the cat if you already have it in the refrigerator. 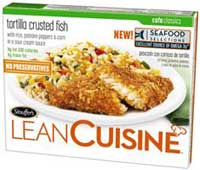 I had higher hopes for their Tortilla Crusted Fish. One of the meals we've really liked from Lean Cuisine is their Santa Fe Style Rice & Beans, so I was hoping for a repeat of the rice combination with the addition of some crunchy tortilla-crusted fish. Silly me. Basically the same piece of fish as the Parmesan meal but the breading was corn tortilla-scented. (It really didn't taste much different.) The rice was a real disappointment, scented with cumin but really having no flavor whatsoever unless you happened to bite into one of the bits of poblano pepper there in the rice. Poor poblanos – even their distinctive Southwestern flavor couldn't save this one.

Bad news all around. Remember the typewriters and the monkeys? Looks to me as though we've already found Lean Cuisine's Shakespeare (or at least one of the comedies) in the Santa Fe Style Rice & Beans or their Salmon with Basil. Leave both of these fish dishes on the shelf.

PS: Once I scraped the breading off the leftover pieces of fish I gave the fish to my cat Squirt. He says that Lean Cuisine should make a bunch more fish dishes. He's hungry.