A little over a year ago we discovered Alpha Foods with their vegan Beefy Chedd'r Pot Pie and Chik'n Veggie Pot Pie. Their products are all vegan and include vegan meat substitutes; "chik'n" burgers, nuggets, and strips; burritos and tamales, pizzas, and the aforementioned pot pies.

While the panel called the pot pies "surprisingly tasty," at $5.99 each - and 31 grams of fat each - we didn't feel they were worth the cost (or the fat). And that's often the trouble with vegan foods utilizing meat substitutes: they're highly processed and often contain excess fat or sodium and little fiber. 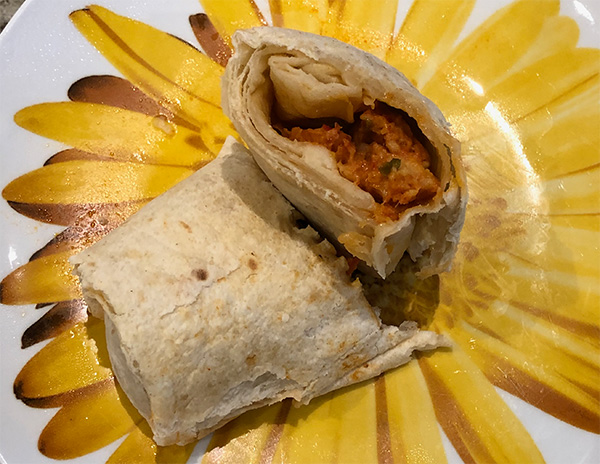 One of our more important criterion for burritos is how well they cook: do they split down the side in the microwave? Do they become difficult to pick up and hold in the hand - for example, do they become slimy or break up?

The Alpha Burritos definitely pass the hold test: they don't split down the side, nor do they become unacceptably slimy where they come in contact with the plate. These are actually some very good tortillas indeed: soft and tender with a faintly sweet, yeasty flavor.

The problem, as with so many burritos, is the filling.

The Chik'n Fajita Burrito has 290 calories, 430 milligrams of sodium, and only 1 gram of fiber. I can't decide whether I should be surprised, to be honest: "vegan" usually means "without animal-based products" but in practice, as I mentioned, if often means "highly processed." Only 1 gram of fiber, when switching to a whole wheat tortilla and including some beans and brown rice inside the burrito would be so easy? Alpha Foods did neither of these things.

Note also the amount of filling in the picture above. We've beaten up on other burrito companies for their scanty amounts of filling compared to tortilla, and Alpha Foods is no exception. What filling there is looks nothing like what's on the package, and the Ingredients list bears this out: the first ingredient is the tortilla itself; followed by the "Chik'n," which consists of filtered water, soy protein concentrate, structured vegetable protein (isolated soy protein, wheat gluten, wheat starch), and a number of other additives; this is followed by "Vegan Spicy Cheddar" (with its saga of ingredients) and then Vegetables (green peppers, red peppers, onions), and Spices, which for some reason includes "Sriracha Style Hot Sauce." (Sriracha?)

The filling looks, well, processed: like nothing so much as finely ground vegetable protein. (To be fair, that's what it is.) And it tastes like it: the red and green bell pepper are the strongest flavors, followed by onion and hot sauce, but there's no evidence of a cheese-like substance anywhere. "I wouldn't say it tastes like fajitas other than the peppers," my wife said, "but it's OK. It's not going to fool anybody that it's chicken."

The Mexicali Burrito has 300 calories and much more salt at 550 milligrams of sodium. (And again, 1 gram of fiber.) 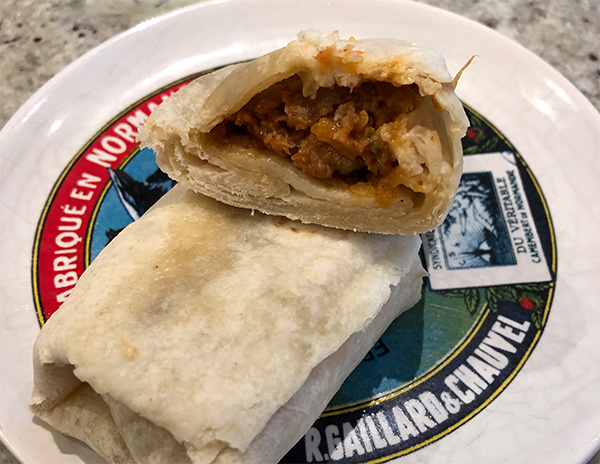 It has the same soft, tender tortilla and also passes the hold test. There does seem to be a bit more filling, but as with the Fajita, the filling has the texture of finely ground wet cardboard.

We simply can't recommend that you consume something so highly processed - at about $4.99 each - when you could choose a Sweet Earth burrito and have something that actually contains real food ingredients.

On both of today's packages it states, "Go on, take a bite, you'll never guess you've gone plant-based!" This is the sort of stuff that gives "plant-based" a bad name.