Healthy Choice has really been making an effort to step up their game. Their "All Natural" line has fared pretty well with us in the past, here and here, so it was good to see new meals from them at the store.

They've changed their packaging. These new meals come in a clear plastic tray (that's recyclable) with a nifty seam in the film covering the food. The instructions tell you "No peeling, poking or stirring needed!" That's kind of nice and minimizes the mess and the burned hands from the steam released when you have to fold back the plastic and stir. What's rather amusing is that "This special film may make steaming or popping sounds as the meal steams." I did hear steaming and hissing noises as the meals cooked, but the possibility of popping sounds had me a little concerned. OK, not really, but what were they going to do, explode and coat the inside of my microwave with pasta sauce? 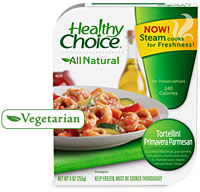 But I digress. The first meal we tried is the Tortellini Primavera Parmesan. I had high hopes for this one; the numbers are really good at 240 calories, only 490 milligrams of sodium and 6 grams of fiber. Unfortunately, with the new packaging telling you NOT to stir, Healthy Choice has shot themselves in the proverbial foot. While the pasta sauce smells great - it's a bright, tomatoey sauce that really benefits from the roasted red peppers - the pasta sauce wasn't well distributed throughout the meal, and the tortellini suffered. Those that weren't in the sauce became little bullets. That said, those tortellini that were in the sauce were rather more mushy than I'd like, and although the label says they're "four-cheese filled whole grain tortelloni," I couldn't really taste any cheese in them. And as you've heard me say before, whole wheat pasta would have helped with the overcooked pasta. All in all, not a bad effort that could have used a little stirring, but because of that I have to give it a thumbs down. 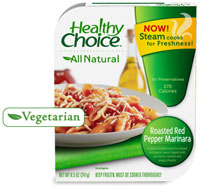 The Roasted Red Pepper Marinara came next. This meal comes in at 270 calories, with a little more sodium at 560mg and 5 grams of fiber. (It really does look like Healthy Choice is working on their sodium levels.) It looked and smelled good coming out of the microwave, but there's that not-whole-wheat pasta again: when you stir the dish to distribute the cheese and pasta sauce over the pasta, the cavatelli start to break up. The mushy pasta wouldn't be impossible to overcome, but Healthy Choice has managed to create a roasted red pepper sauce that not only doesn't taste like a roasted red pepper has ever shared a kitchen with it, it's oddly.... bland. Roasted red pepper tomato sauce - bland? Even the cheese is oddly bland. There's nothing to outright complain about, but there's nothing to recommend it, either.

Sorry, Healthy Choice. Your pasta might be "whole grain" or "9 grain" but it just doesn't hold up. You keep trying and we'll do the same.