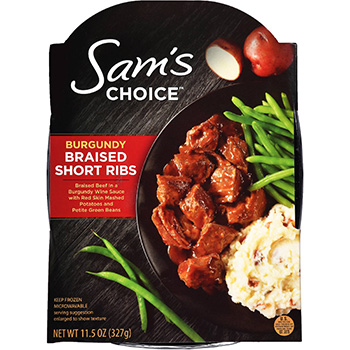 We love to hear your feedback here at Dr. Gourmet, so when you comment on our reviews, we pay attention. One of the reviews that's been getting a lot of comments more recently has been our review of three dishes from Beetnik Organics back in late 2015. In those comments Trish F. recommended meals from Tastefully Plated that, like the Beetnik meals, are billed as Paleo and happen to be sold at Walmart.

Today's meals come from Walmart's Sam's Choice line, and I must admit to being surprised by the relatively moderate sodium levels in these meals. Certainly the sodium levels in some of the meals we saw were higher than we're willing to review, but none was outrageous. (If Walmart is paying attention to sodium, I'll take that as a good sign for the industry as a whole.)

The panel chose the Burgundy Braised Short Ribs for the first review. Both meals for today have identical, and fairly typical, cooking instructions: pierce the overwrap, cook, stir, recover, cook some more, eat. The short ribs didn't impress on first sight, being almost too watery, but as we let the dish sit (in order to cool enough to eat), the sauce thickened until it didn't seem so much like "pot roast in water," as one panelist put it.

The beef is served with a side of green beans - the tiny, whole kind that nicer restaurants like to call "haricot vert" (literally, "green beans" in French). They're a great choice for a frozen meal because they steam so nicely, ending up with a delicate crunch and a sweet green bean flavor. The mashed potatoes appear to be all redskin potatoes - at least, the bits of skin included are red, and they have the creamy potato flavor of redskin potatoes, with a hint of butter. They're a little smoother than some of the panel liked, but noted that "it's a personal preference, not a criticism."

The main course, the beef, is surprisingly good. There's not enough of it to be great (according to the panel), but the short ribs are "pretty tender," "nice beefy flavor," and the sauce "definitely has red wine in it - tart and sweet." The panelists also noted that despite the 610 milligrams of sodium in the meal, it doesn't taste salty, although that could be because there are 410 calories in this meal - on the higher side of most frozen meals (but only 3 grams of fiber). Overall, the panel gave the Burgundy Braised Short Ribs a thumbs up. 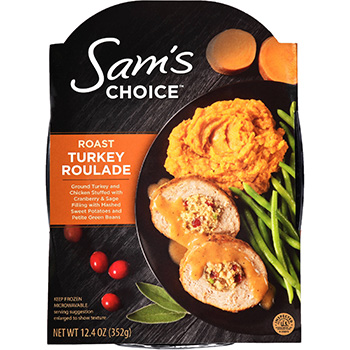 In contrast, the Roast Turkey Roulade seems much more impressive at first. The two rolls of turkey look quite substantial - and indeed, this meal has 500 calories to go with 590 milligrams of sodium and 5 grams of fiber. This is also served with haricot vert (basically the same as the Short Ribs right down to the amount) and accompanied by mashed sweet potatoes.

Unfortunately, the sweet potatoes are everything that used to turn me off of sweet potatoes: they're overly smooth and overly sweet. These sweet potatoes have been pureed within an inch of their lives and have the same thick, liquid texture of melted ice cream. And ice cream is nearly what they taste like: so much brown sugar and vanilla have been added to these sweet potatoes that they would be far more suitable for a dessert. You may like them (certainly one or two of the panel did), but 21 grams of sugar is way too much when the dish also contains 21 grams of protein. "That's just wrong," said a panelist.

Still, the rolled and stuffed turkey slices might have saved the dish... until we cut into them. The ingredients list says that the turkey is "boneless turkey thigh," and that is certainly so - if you take turkey thigh, process it smooth, compress it into a roll, and inject the center of the roll with sweetened cranberries and a filling of cornmeal mush and potato starch. If you mixed a bunch of fake sage flavor into the "stuffing" and browned the outside of the roll, you'd have what is in this dish. "If you close your eyes, the turkey flavor is pretty good," offered a panelist.

Maybe you can eat with your eyes closed, but I certainly can't. Nor could the panel close their collective eyes and overlook the combination of incredibly processed meat and overly sweet potatoes. Leave that one on the shelf.