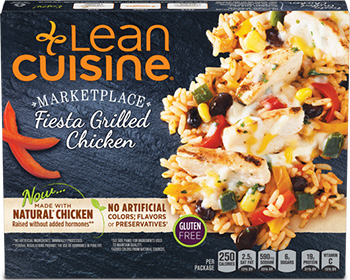 Over the last couple of weeks we've reviewed items from companies that are still comparatively new to us, with breakfast food from Dr. Praeger's Purely Sensible Foods and taco bowls from Rick Bayless' Frontera Foods.

This week we return to that old standby, Lean Cuisine. When we first started doing food reviews, over ten years ago, the appearance of Lean Cuisine at our review sessions wasn't exactly an occasion for celebration: most of the time their boxes elicited a groan or at least a few rolled eyes. Lean Cuisine deserves credit for the work they've done in improving their products - from my admittedly unscientific surveys of their products (at my local grocery stores) it seems that far fewer of their products are in the "shockingly high" sodium level range.

Back in 2011 they even attempted foods containing the meat substitute "Gardein™," and more recently they've added gluten-free varieties. To my mind that's even more impressive than creating meals using meat substitutes: Lean Cuisine offering gluten-free meals could be a huge help to a lot of people with Celiac. (Yes, frozen meals are not your best option, but people eat them and we review them to help people make better choices. As my wife says, "Perfect is the enemy of better.")

We started today's session with the Fiesta Grilled Chicken, a meal now labeled as gluten-free that according to our records we reviewed back in 2010. It got a good review then, but it wasn't labeled gluten-free.

Other than having lower numbers overall than its previous incarnation (now 250 calories, 590 milligrams of sodium, and 3 grams of fiber), it's still pretty good: its scent, as it comes out of the microwave, is initially of green chilies, with tomatillos and lime following not far behind. While we'd prefer that they use brown rice instead of white, at least for the sake of the fiber content, the white rice isn't overcooked and is dotted with diced red and yellow peppers. "It's colorful," remarked a panelist.

The fairly substantial strips of chicken have grill marks on them (is anyone fooled by these?) and are nice and tender. One panelist noted that the chicken tasted a little salty while the rest of the dish did not, and a look at the ingredients list shows that there is some potassium chloride (a salt substitute) in the dish. The sauce (still much like that of their Enchilada Suiza) is sour cream based with Jack and cheddar cheeses and a hint of jalapeno, but I would characterize this as savory as opposed to spicy. The black beans could be firmer, to give the dish a bit more texture, but overall we still give this one two thumbs up, and even endorse the suggestion on the back of the box, which says "For a balanced menu, enjoy with a side salad." Good and gluten-free. 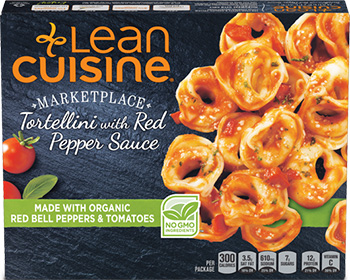 I would have sworn that we'd already reviewed the Tortellini with Red Pepper Sauce, but apparently not. The numbers aren't bad, with 300 calories, 610 milligrams of sodium, and 3 grams of fiber, but it comes out of the microwave with a "sharp, almost vinegary" tomato scent.

Fortunately that's not borne out in the flavor: the dominant note in the sauce, instead of being either too sweet or too acidic, is of savory roasted red bell pepper, with plenty of black pepper to give the dish zing. There's a hint of nutmeg that's an interesting addition to the basil and oregano, and there are bits of red bell pepper, tomato, and diced onion throughout.

The tortellini themselves are a little chewy, as if the pasta were just a little too thick. The cheese in their filling does come through nicely, however. Another thumbs up, although in this case we have to disagree with the suggestion on the back: "For a balanced menu, enjoy with a piece of fruit and a glass of low-fat milk." Fruit is fine, but adults don't need to drink milk. Better to have a side salad as well.

Read all reviews of meals from Lean Cuisine »