I am often asked in the Q&A after lectures what I think of meal delivery plans. We have reviewed a number of them here at Dr. Gourmet (including Blue Apron, Freshly, HelloFresh, Home Chef, Plated, and Sun Basket) and they have been all mediocre or worse - and generally speaking quite expensive. Some of my colleagues argue that one good reason to recommend them to patients is it can help get them jumpstarted to begin cooking on their own - almost like taking cooking classes.

We reviewed Hungryroot back in 2016, and our review was pretty scathing:

"...over seasoned with dried thyme and you have a grainy bitter mess."
"...everything lacked about this."
"What you get after about 5 minutes of work is appallingly bad. This tastes of nothing except old carrots."
"This can only be described as a crime. These folks at Hungryroot are, quite simply, guilty of murdering innocent ingredients. The finished product is just awful."

They reached out recently to let us know that they had changed their paradigm and to ask whether we would like to review them again. 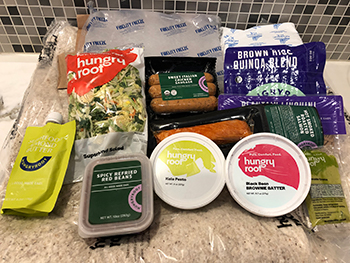 It's a bit confusing at first because the booklet is arranged by one of the main ingredients but that is not immediately obvious from how the book is laid out. There are two pages with the list of the foundation ingredients, the recipes that you can make with them and the page number where the recipes start.

These really aren't recipes as much as they are just dishes. Each of them combines two or three of the "ingredients" from the package. For example, with the Pesto Salmon Rice Bowl the instructions call for heating some oil (not included and no amount specified) in a skillet, adding the brown rice blend, a tablespoon of water and then, after cooking for a couple of minutes finishing the dish with the Kale Pesto and topping with Hot Smoked Roasted Salmon.

This is a very cool concept and the meal above did only take the 4 minutes as noted in the booklet although this completely negates the idea that it will help people learn to cook since all you are doing is combining things.

It was OK. Not good, not bad. Just OK. The brown rice and quinoa combination is well cooked and not gummy and the kale pesto tasty - if a bit bland - but the salmon is not very good, being quite salty and the smoky flavor overwhelming. Flaked and mixed into the rice and pesto, that was pretty much the only flavor coming through with the subtlety of the pesto disappearing completely. The real problem is the sodium content.

Note that they play a bit wonky with the calculations on the rice package and I am unsure whether the sodium content for a serving is 400 milligrams or 335 mg. Even still, at over 900 milligrams for dinner you are pushing into very high salt territory. It's great that the food is fresh, preservative free, and free of artificial ingredients, but that's a lot of salt.

The booklet really broke down when trying to find a recipe for the Spicy Refried Red Beans. I suppose because they are not considered a main part of the dish, the ingredient is not listed in the quasi-table-of-contents on page 9 and 10. Hunting through the book to find them is a bother. The first dish (page 13) used two ingredients not included in the box and the second (page 18) was missing two. The beans are OK but at the price of $5.50 per item, this is quite costly. You can purchase a 15 ounce can of Amy's light in sodium chili beans for about half the price.

We had the same problem with the Sweet Italian Chicken Sausage. There are only three dishes and the shipment did not include appropriate ingredients that allowed completion of any of the three. One that came close was the Chicken Sausage Pesto Linguini although that dish calls for their Spinach Garlic Chicken Sausage. The sausage is predictably high in sodium but higher than most at 480 milligrams per link and the instructions call for 1 1/2 links per serving. Add that 720 milligrams to the 90 in the pesto and it is in a high sodium range, but then the Plantain Linguini contains a whopping 640 milligrams per serving - that's 640 milligrams of sodium in the plain pasta alone. (Most pasta contains no sodium at all. Zero. None.)

Wowser. That's 1,360 milligrams of sodium for a meal. Not as bad as Applebee's or Chili's but still WAY too high.

The flavor of the sausage is OK and the pasta is also OK. In the end this is just meh.

The inclusion of the Superfood Almond Butter was equally confusing. There is no dish that uses this in the booklet and I had to go online to see that one can "Slather on toast, drizzle on oatmeal, or add to your morning smoothie. Also excellent paired with apples or carrots for an afternoon snack."

However, none of those ingredients - oatmeal, toast, or apples or carrots - is included. That said, this stuff is de-freakin-licious. Two tablespoons comes in at 180 calories and a whopping 4 grams of fiber (twice that of peanut butter). This is along the lines of a premium peanut butter spread but is about 4 times the price. A 16 ounce jar of Justin's Classic Almond Butter might not be quite as tasty, but the Hungryroot is about a dollar an ounce with Justin's only about 55 cents per ounce (on Amazon Prime).

The Black Bean Brownie Batter is true to form with the baked result being a bit crumbly, but still moist, and a fantastic brownie flavor (each of them is 110 calories).

In their defense of the confusion in using the booklet, I did go back and read the email they sent prior to shipping. The ingredients they sent were not necessarily what was on offer for the regular customer that week: they put together a box especially for us, since I have Celiac disease. They did have some suggestions for what they sent:

The Plantain Linguini is great with the Kale Pesto, you can add the salmon or the Sweet Italian Chicken Sausage to this combination (we recommend gently heating up the salmon since it's already cooked, the chicken sausage is also pre-cooked, but it's best when you slice it diagonally then sear in a skillet to crisp it up a bit)

The Superblend Salad can be enjoyed cold as a salad base, but it's also delicious sautéed with olive oil, salt, and pepper.

The Brown Rice Quinoa Blend goes great with our Spicy Refried Red Beans and avocado crema, you could add our Savory Spiced Tofu Bites as well.

I saw in your original review you didn't love the cookies baked, I put in our Black Bean Brownie Batter which can be enjoyed cooked or raw ( I personally prefer it raw)!

Plus you'll find our Superfood Almond Butter in there too :)

I never figured out how to use the Superfood Salad or the Avocado Crema. The former is a good blend of fresh greens and the latter so salty and vinegary that you can't taste the avocado.

The thing is that if this is to work, there has to be a bit more guidance. When trying to order online the system can send you a pick of the most popular items, but it's still not clear just what you'll get. On the other hand, if you set up your own box, choosing one item causes the system to highlight two other items that you can use with the selected item to create a meal. If we had done this rather than having the items selected specifically for our review, we wouldn't have had the confusion regarding the red beans or the almond butter - my bad for not reading their communications more closely.

I am torn. Their last products were just silly. These are a big step up conceptually, but it misses the mark in a couple of ways - how to combine the foods you would like to make a quick easy dish is not clear enough, ordering is a bit hit and miss because of this and there is just too, too much salt in almost everything. Cost is a factor as with all of these programs. If you order 21 items they might easily make 7 meals for two people - about $9.00 per meal. That's not bad, but you could purchase some pasta, chicken, a skillet sauce and some veggies and spend much less.