It's been a long time since we tried any Tandoor Chef meals - almost three years. Part of the problem, as you might guess, has been the sodium content, but part of it has been availability - there just wasn't more than a couple items available at our local supermarket for quite some time.

The good news is that somebody at Deep Foods has convinced our local Whole Foods to handle quite a few more varieties, including several that are both gluten-free and more moderate with respect to sodium - at least for frozen foods.

The last time we reviewed Tandoor Chef meals we tasted their Vegetable Pad Thai, which was overcooked and gummy, and their Paneer Tikka Masala. The flavor on the Tikka Masala was good, but the problem was that this wasn't a complete meal. Looking at the Tandoor Chef web site, it would appear that they no longer make the Paneer Tikka Masala on its own - it's now in what they are calling their "Balanced Vegetarian" meals, which are more complete meals. We'll have to look for those. 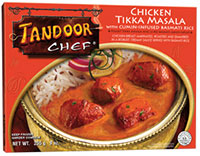 That said, one could argue that neither of the meals we're testing today are complete meals, either. We started our review session with the Chicken Tikka Masala. This is 5 generously-sized chunks of breast meat in a creamy tomato and onion sauce with red curry powder and turmeric. The chicken pieces are nice and juicy and the sauce is smooth and flavorful with a moderate level of spice. There's plenty of extra sauce to mix with the basmati rice, which is flavored with cumin seeds and only slightly overcooked. It's hard to convey just how tasty this is - our testers devoured this quickly and demanded to know where they could buy their own.

There are drawbacks, however. First, there are 400 calories in this dish, which does not include a vegetable. For lunch you could easily follow this with a piece of fruit, or with dinner have a side salad, but it's still more work than one should have to do to eat healthy out of the freezer. The sodium content is higher than I'd like at 710 milligrams, and with the complex spices, it's likely that the folks at Deep Foods could cut the salt by 15-20% and the flavor wouldn't suffer at all. Finally, there's no fiber in this. None. Zero. The flavor is so good, however, that after much discussion the verdict comes down narrowly on the plus side, provided you have some vegetables or fruit with it. 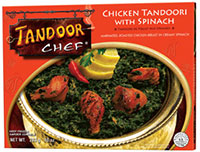 A similar situation applies to the Chicken Tandoori with Spinach. This is about the same amount of chicken as in the Tikka Masala, but this time the chunks come out rather more dry, even in the larger pieces. The flavor of the cardamom, paprika, and garam masala comes through in the chicken and is complemented by the creamy and spicy spinach, which is cooked with green chili peppers. Compared to the Tikka Masala, this is good but not great - a disappointment only by comparison. The numbers are pretty good at 280 calories and 670 milligrams of sodium. Another instance where the spiciness of the flavors - and this has a gentle afterburn - would more than make up for a cut in the amount of sodium. Finally, this has far more fiber at 4 grams, even without a starch. While the flavor in this dish isn't quite as spectacular as the Tikka Masala, the 4 grams of fiber make up for the missing starch, giving Tandoor Chef and the folks at Deep Foods two for two.