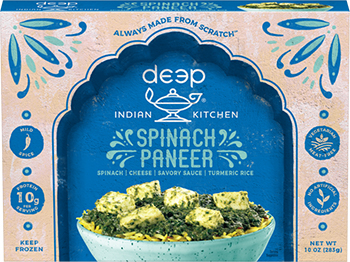 With social distancing in force here in Washington, DC, today's tasting panel was just me and my wife. She's been part of our tasting panel from the beginning, as you might suspect, and has been the source of some of the more, er, snarky comments from panelists in the past. Let's get right to it.

The Spinach Paneer is labeled "mild spice," while the Tandoor Chicken with Spinach is labeled "medium spice," so we chose to taste the least spicy dish first. 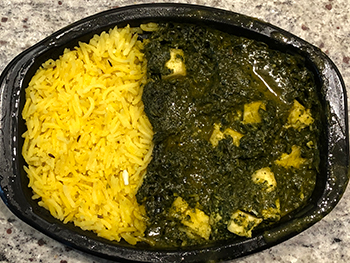 The thing about Palak Paneer (and that's what this is: "palak" is spinach and "paneer" is an Indian cheese) is that this is a dish where both of the main elements need a fair amount of sodium to bring out their flavor. Spinach certainly needs it, and paneer, unlike many other cheeses, simply has no sodium in it.

Right out of the microwave the rice is beautifully cooked: fluffy and tender, with a fine turmeric flavor. (We've seen this same rice before in their dishes - it's clear that's it's a staple.) The spinach paneer is truly savory, with a deep spinach flavor and a mild bit of spice rising in the back of the mouth. While still hot the paneer is rather more soft than I'm used to - paneer doesn't tend to melt much at all - but the chunks of paneer in this dish do tend to melt a bit, and are deliciously savory.

What's impressive is that this dish doesn't taste salty. I fully expected to have to give it a thumbs down based on the numbers alone, but the amount of salt seems fully justified given the ingredients. Recommended.

Next we turned to the Chicken Tandoori with Spinach. 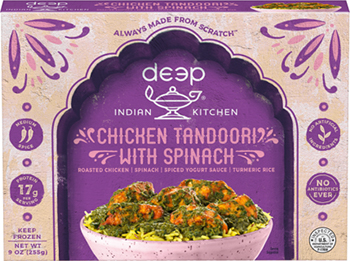 Let's be brief: this is the exact same dish as the Spinach Paneer, without the paneer cheese. Same rice. Apparently the same spinach and green chile sauce. With the addition of four nicely-sized chunks of chicken breast that might be just a touch on the dry side. 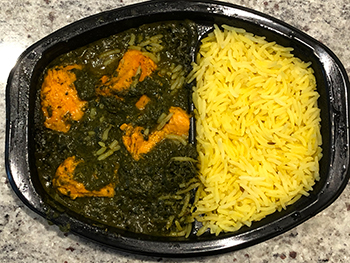 I said to my wife, "This isn't Tandoori Chicken." Sure, the chicken breast is marinated in tandoor-style spices, but I maintain that tandoor anything must be cooked in a tandoor oven, which is a particular type of clay oven. (Deep Indian Kitchen says on its website that they cook this chicken "in our tandoor ovens," but I find that hard to believe simply because of the realities of frozen food manufacturing.)

Be that as it may, the chicken has a spicy-savory tandoor flavor and is as tender as you would want it to be - while being just a little bit on the dry side. Fork this up with a bit of the spinach sauce and you won't notice a thing, however.