Against The Grain Pizzas

I was standing in line the other day at Whole Foods with a collection of convenience foods for testing, including a few that were gluten free. People are pretty friendly here in New Orleans, and a fellow behind me in line said, "Oh, you have to try Against The Grain Gourmet pizzas." He was so adamant that I cashed out and went back to the freezer case. There was only one version there - the Three Cheese pizza.

The box looked promising and I put it in the freezer and promptly forgot about it. A few days later I was back at the store, meandering about looking for something else, and I passed the freezer case and there was another Against The Grain pizza: Nut Free Pesto. OK, I guess that it's time to test them. 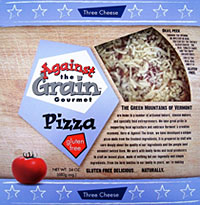 They looked promising, with fantastic ingredients, but I was a bit dubious because the crust appeared to contain only tapioca starch and I thought it might be a bit grainy. The rest of the ingredients were all recognizable, including mozzarella, milk, eggs, tomatoes, canola oil, parmesan, cheddar and water. That's all! The numbers looked even better. Two slices of a large pie contain only 410 calories, and amazingly, just 387 mg sodium.

We baked this using the "crispy crust" instructions and it looked fantastic coming out of the oven. We were not disappointed. The crust is tasty, crispy and has good yeasty flavors (even though there's no yeast). It was not at all grainy. The tomato sauce tastes fresh and the cheeses melt well. Pair this with a side salad and you've got the perfect emergency meal. The fact that it's gluten free is secondary: this is a great pizza and in blind taste testing you might not know the difference. 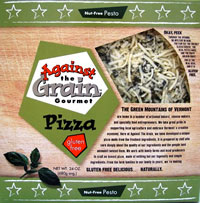 Often the second or third item we test is a big let down when the first is so good, but that's not the case here. Their Nut Free Pesto is as good as a frozen pizza gets. Same sort of fresh recognizable ingredients, but it uses sunflower seeds instead of pinenuts or some other nut for the pesto (so it's tree nut free). It has the same great crust and there's a fine basil flavor (especially for coming out of the freezer). It's a little higher in calories at 475 for two slices. There's also a bit more salt with 421 mg of sodium.

As frozen pizza goes, this is as good as it gets and it's gluten free. It's perfect for families who have someone with celiac disease, but you know, it's really good pizza for anyone.