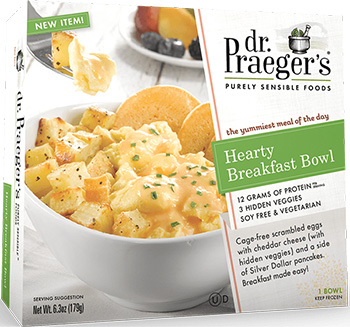 We were first introduced to Dr. Praeger's Purely Sensible Foods almost two years ago by a reader who asked us to review their veggie burgers. At the time we found that two of those varieties were "among the better veggie burgers we've ever tasted." We went on to taste two of their varieties of Dr. Praeger's fish sticks and fish patties, which we found to have a "fresh, clean fish flavor," with the smaller fish-shaped patties seeming to be perfectly suited for children.

With more and more companies getting into the frozen breakfast food aisle (here are all of our reviews of breakfast items), I was still a little surprised to see breakfast bowls from Dr. Praeger's at my local Whole Foods. I had thought they had limited their breakfast products to hash browns, a product type we don't plan on reviewing any time soon no matter who makes them.

But with breakfast bowls becoming more common, like Good Food Made Simple's Breakfast Bowls, it's reasonable that a company started by two heart surgeons that describes its reason for being as "encouraging a way of eating sensibly through inspired offerings" would like to foster healthy breakfasts. The two bowls we have today are just two of the four varieties they offer.

The Hearty Breakfast Bowl has 270 calories and 450 milligrams of sodium, but only 1 gram of fiber. It's described as "Cage-free scrambled eggs with cheddar cheese (with hidden veggies) and a side of Silver Dollar pancakes." "Certainly sounds hearty," a panelist remarked. You remove the three pancakes from the bowl and microwave the recovered bowl for 3 minutes, then reinsert the pancakes and cook for another minute.

We were concerned that this might result in tough pancakes, but they're nicely tender, with a lightly wheaty flavor (they're made with a combination of whole wheat and white flour) touched with a hint of sweetness from the sweet potatoes included in their ingredients. The bright yellow eggs are scrambled firm and are topped with just enough cheese for flavor - not so much as to be overpowering. Mixed in are tender diced potatoes, and somewhere - we couldn't figure out where - are the aforementioned "hidden veggies."

On paper that all sounds good. Yet the panel found the whole didn't quite fit the description of a "hearty breakfast." There's actually very little eggs in this dish - they and the potatoes barely covered the bottom of the five-inch bowl they were served in. "That just doesn't seem hearty," said a panelist, "even with the pancakes." Indeed, with only 1 gram of fiber this definitely doesn't qualify as "hearty" - as a physician I can't recommend this because it just won't keep you satisfied. Leave this one on the shelf. 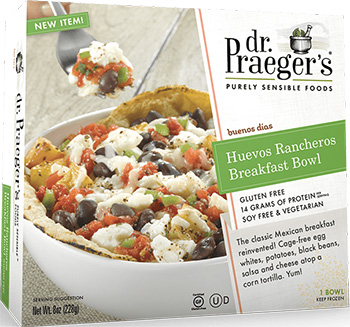 Fluffy and brightly white egg whites are dotted with "firm, but not quite crunchy" black beans, red tomato salsa with diced onion for texture and the same diced potatoes as in the Hearty Breakfast. It has the expected scent of cilantro and corn that comes through nicely in the flavor mix of savory eggs, tart and sweet salsa, and cheese, and the corn tortilla has a true nixtamaled flavor.

But it's the tortilla that's the down side: twice as thick as other corn tortillas we've seen, it's placed at the bottom of the bowl, leaving it a bit "slimy" after cooking, and as the meal cools, the tortilla becomes tough. So tough, in fact, that the edges are not just chewy, "it's actually hard, almost like a bone," said a panelist after (we must admit) spitting out a piece of that edge. The panel voted to give the Huevos Rancheros a thumbs down along with the Hearty Breakfast, saying: "In the five minutes you spend microwaving these you could make scrambled eggs and whole wheat toast and be much happier." And have less sodium, use less plastic (even if it is recyclable), and spend less money.