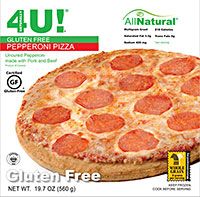 I have said before that one of the things I miss most about having to eat gluten free is pizza. Not being able to go out for pizza occasionally is a drag, but you get used to it. I've never been one much for frozen pizza, but I've reviewed a fair amount of them since we began writing these reviews ten years ago. The interesting thing is that the gluten free pizzas have fared pretty well.

The most recent addition to the lineup comes from a Canadian company called Naturally 4U. We found them at Winn Dixie and this supports the notion that it is easier than ever to eat gluten free in America. They looked promising with only about 200 calories for a large slice (1/4 of the pizza), 420 milligrams of sodium, and 2 grams of fiber.

Reading the directions made us suspicious of how in touch with reality this company might be. The package says to preheat the oven to 395°F. 395? Really? Why not 398 or 402?  Anyway…

We were less encouraged opening the box and finding a crust that looks a lot like the cardboard discs that are used under cakes at the bakery. "Well," I thought, "if it isn't a good pizza, it'll make a great Frisbee." Truthfully, I was prepared to not like this pizza.

They are pretty good, however. The crust is too thick and these would have been a lot better with about 1/3 less dough and more toppings, but the flavor is very good, with just the right yeasty touches. It is a little too crunchy at the edges, but that is because the crust is too thick.

The pepperoni pizza was the better of the two, with a sage flavor coming through well. The sauce is not too sweet but there could be just a bit more cheese (although this might be simply that there is too much crust for the amount of sauce and cheese). An acceptable pizza, but not up to the standards of the Against the Grain products. 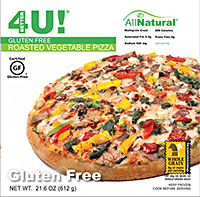 Weirdly, the Roasted Vegetable Pizza is pretty awful. You would think that they would use the same crust, and if they are, the bakers were having a bad day when they made ours. The crust was doughy with the texture of wet bread in the middle (in spite of us putting it back in the oven because we didn't think it had cooked long enough). Combine the terrible dough with not enough sauce and a miserly amount of cheese and roasted vegetables and you get a truly awful pizza.

A mixed report for this company. Possibly this is due to quality control, but even if this is the case there are better choices on the market for those of you looking for good frozen pizza.