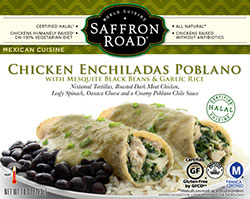 We've seen a lot of new Saffron Road products this year, and it has been hit and miss with a 50/50 performance. That's par for the course with this company, and even though we feel good about them, it is interesting that often when we put two of their products in front of the tasting panel, one is good and one is not.

Today we start with their Chicken Enchiladas Poblano with Mesquite Black Beans & Garlic Rice. The name is a mouthful, but the meal is pretty good and that's without the sub-sub-title on the package (an additional 16 words).

There are two small enchiladas covered with a cheesy poblano sauce. The corn tortillas are not gummy (which is not bad for a frozen meal) and the filling contains tender chicken chunks and spinach. This is accompanied by some white rice that does, indeed, have some garlic flavor. The black beans are billed as "mesquite" and do have a bit of smoky flavor, but in both cases the sides complement the dish well. All of this is topped with a tangy but not very spicy poblano sauce.

At only 360 calories this is a pretty satisfying meal. The flavor is good, although it could be a bit spicier. The dish contains 5 grams of fiber, and best of all - only 480 milligrams of sodium. It is so refreshing to have a frozen meal that contains a reasonable amount of sodium. So often they taste so overwhelmingly salty that tasters can take no more than one or two bites without making faces or complaining. All in all, this is a very good choice for lunch, especially if the alternative is Taco Bell or some other glow in the dark, fake food.

Our second offering from Saffron Road is their Teriyaki Chicken with Soba Noodles. I'm not sure we've run across soba noodles in other convenience meals, but it's a good idea - these noodles do hold up much better to microwaving than rice noodles. Unfortunately, they have less fiber than plain white-flour pasta (not to mention whole wheat pastas). In the long run it doesn't much matter, because the meal has 3 grams of fiber - a respectable amount for a convenience meal.

That fiber comes exclusively from the impressive amount of vegetables in this dish. There's broccoli, celery, red bell peppers, carrots, and we chose to believe that there's bok choy in there because the package says so (and they're not legally allowed to lie): it's all cut too finely to be able to identify any bok choy among all the other greenery. Even so, the veggies aren't overcooked and give a nice bit of crunch among the slippery noodles.

Too often teriyaki-sauced convenience meals are sweet, sweet, sweet. Cloyingly so. Saffron Roads executes its teriyaki sauce with great restraint, giving it just a touch of sweetness and allowing the umami of the tamari, ginger, and garlic to come through. Using dark meat chicken is a smart choice for this dish - the chicken has a fine, meaty flavor and is remarkably tender for its trip through the microwave in these smaller pieces.

An interesting point about this meal: it contains 640 milligrams of sodium with its 330 calories, but "salt" appears in the ingredient information only as a component of the soba noodles and the "gluten free reduced sodium tamari" sauce. (Note that this dish is not gluten-free, however.) A somewhat surprising example of judicious use of ingredients, at least in convenience foods. Overall, another good choice for lunch. Today Saffron Road is 100%.