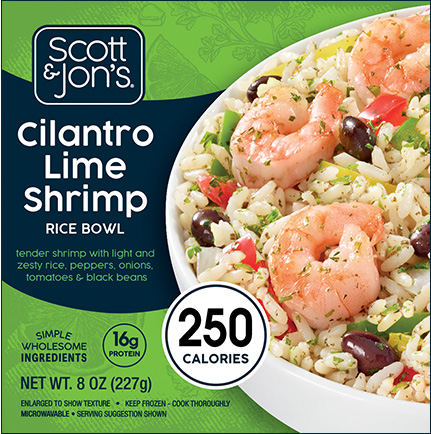 We discovered Scott & Jon's in 2019, and boy were we glad to have good shrimp dishes to recommend. We encourage our readers to consume more seafood, but good frozen fish or shellfish dishes are still few and far between - except for the shrimp meals from Scott & Jon's.

As it turned out, we gave a thumbs-up to only 3 of the 7 dishes we tried, which was their entire line at the time. The shrimp in the dishes were all fairly to extremely good, but the dishes they were in sometimes left a bit to be desired.

Today we're revisiting two dishes, starting with the Cilantro Lime Shrimp Rice Bowl. Back in 2019 this dish had 240 calories, 680 milligrams of sodium, and 2 grams of fiber. At the time it got a negative review largely because there was so much cilantro flavor that even those on the panel who love cilantro thought it tasted soapy. 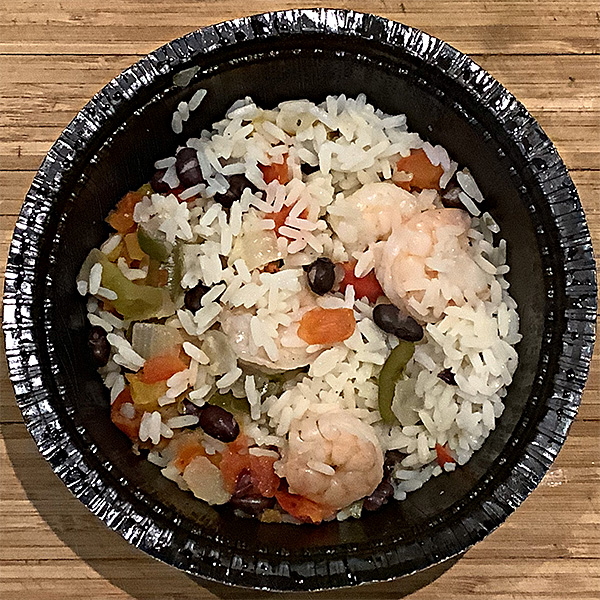 Now this dish has 280 calories, 690 milligrams of sodium, and only 1 gram of fiber. More calories, more sodium, less fiber? Does not bode well.

There are four shrimp in this dish just barely over the size of a quarter. Honestly, we should have fished them out and weighed them to find out exactly how much animal protein was in this dish, because there's only about 2 Tablespoons of vegetables and 1 Tablespoon of black beans to go with a dish that might have cut back on the cilantro, but still has little flavor otherwise.

The Shrimp Risotto back in 2019 had 250 calories, 400mg sodium, and 1g fiber. And at the time we noted that this was not actually risotto, because risotto is made with arborio and this is made with long grain rice (it said so right on the package). 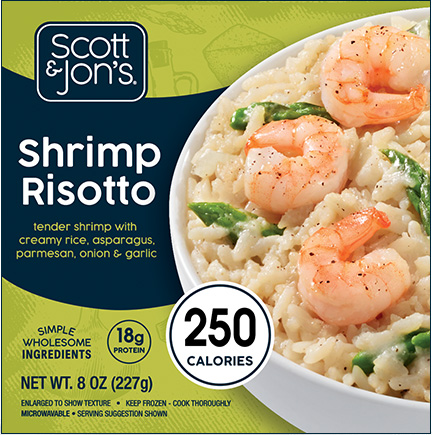 But we gave it a positive review because it had plenty of parmesan flavor, the shrimp were tasty, and the asparagus was reasonably plentiful as well as well-cooked. 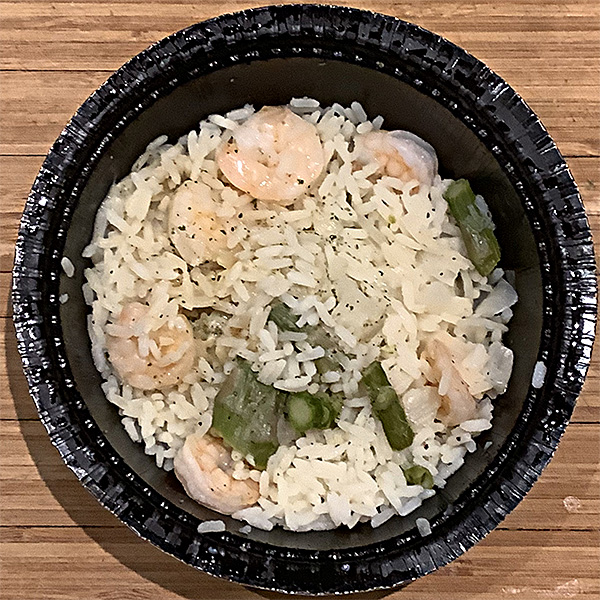 More calories, more sodium? Is there an echo in here?

Here there are 6 shrimp markedly smaller than a quarter and 5 and a half half-inch pieces of asparagus stem. How are there more calories, then?

Soybean oil? We'll come back to that.

There's a fair amount of diced onion that's nearly uncooked, and a few pieces seem to not have been prepped for cooking very well as they seem to have some of the outer skin left on. That said, this is certainly better than the cilantro lime bowl in terms of flavor. We'll call this OK with a big caveat:

On the back of the box it says, "Delicious meals without the guilt." Remarks from the owners state, "Our recipes... are made with simple, wholesome ingredients."

Soybean oil appears in both dishes and is high in omega-6 fatty acids. Soybean oil simply isn't a "wholesome" choice. Nor is maltrodextrin, yeast extract, sodium carbonate, sodium citrate, or lactic acid. You should feel guilty about eating these. We'll have to check the ingredients lists on their dishes far more carefully in the future - we may not bother revisiting any other meals from Scott & Jon's.