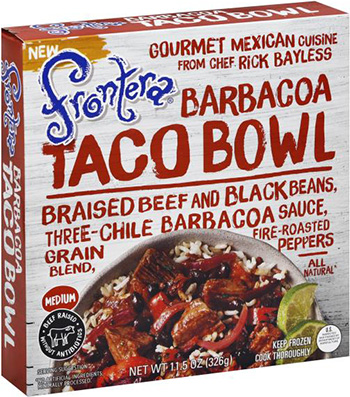 I had thought that Rick Bayless had gotten out of the frozen food business. The last time Dr. Gourmet reviewed anything from Frontera Foods, Chef Bayless' food product company, it was 2007 and we were reviewing two pizzas. Pizzas - from one of the foremost chefs in Mexican and Southwestern cooking still working today.

In truth it doesn't matter how we rated the pizzas, as it appears that Chef Bayless is no longer in the frozen pizza business. I've seen his simmer sauces and such in my local Whole Foods, but generally we shy away from reviewing such things - I generally consider the Dr. Gourmet Food Reviews brief to be frozen meals, recognizing that while frozen meals might not be the most healthy choice one could make, people do eat them, and guiding them toward healthier, tastier choices is going to be far more effective in the long term than telling people that they shouldn't eat them at all and providing them no guidance whatsoever.

As my wife likes to say, "The enemy of better is perfect," meaning that telling people that they have to follow a "perfect" diet, whatever that might be, is often a barrier to the small improvements most people can make that will also make measureable improvements in their health and be something they can live with.

So I was surprised and pleased (and a bit hopeful) to see frozen meals from Frontera Foods. It would appear these came onto the market last summer; of the four varieties on the shelf in my local Rouse's grocery store, we chose the two lowest in sodium for today's review.

The Barbacoa Taco Bowl has impressive numbers, at 290 calories, 480 milligrams of sodium, and 9 grams (!!!) of fiber. Frontera is already utilizing the "new" nutrition facts panel, which makes it clear that 1 bowl is 1 serving (I was a bit concerned about that). This meal is packaged in a recyclable paper bowl with a recyclable paper "film", and after about 4 total minutes in the microwave (including mid-cooking stirring), you have the following: 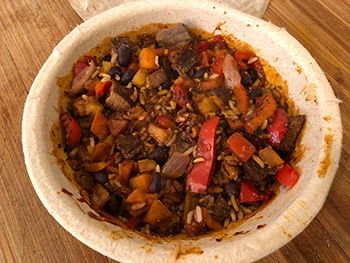 There are big chunks of beef and surprisingly large pieces of red bell pepper, with a scattering of black beans, largish chunks of red onion, and a smallish amount of rice. According to the ingredient list, that's brown, white, and red rice, but we couldn't tell the difference from appearance. That said, the rice is cooked properly: neither mushy nor dry.

The beef in this dish is impressively tender and juicy: too often the beef in frozen meals ends up with the texture of old rubber erasers. This is not only tender, but flavorful, with a deep savor. Those big chunks of red bell pepper are moderately crunchy and add a sweet/tart counterpoint to the beef, while the sauce is redolent of ancho and poblano chiles. Even the red onions have a bit of fire roasting marks on them and add a hit of sweetness, while the black beans (we'd like to see a few more) add a smokey counterpoint to the onion and bell peppers' sweetness.

Overall, an impressive dish and a lot of food for only 290 calories. 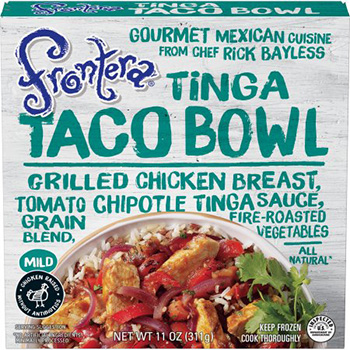 After such a good start we hoped that the Tinga Taco Bowl, with a higher sodium level (260 calories, 590 milligrams sodium, 6 grams fiber) might not be too terrible. So often a good start from a new (okay, sort of new) frozen food company doesn't pan out. 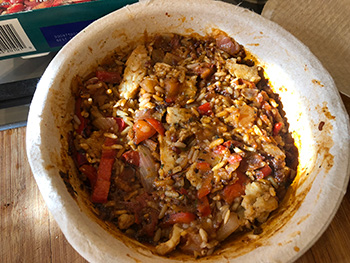 Were we (the tasting panel) pleased to have our expectations proven wrong.

While the Tinga Taco Bowl might be labeled "mild" as opposed to the Barbacoa Taco Bowl's "medium" spice, in some ways this dish was more flavorful. According to our panel, compared to the Barbacoa the Tinga Taco Bowl has more "depth of flavor," with "the sweet, roasted tomatoes" and the "sweet and tart" roasted red onions (with actual grilling marks) adding their counterpoint to the chipotle and oregano sauce on the large chunks of "savory" chicken. Tasters reported that the chicken was "tender and flavorful" and that they "could taste the black pepper on the chicken."

At $4.99 each at our local grocery store, we would far rather have one of these than a sandwich at the same price, or even at a higher price point. Chef Bayless, I take my (chef's) hat off to you.

Read all reviews of meals from Frontera Foods by Rick Bayless »