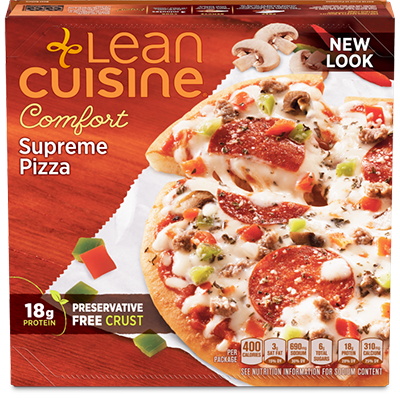 This is cooked in the by-now-standard way of unfolding the box to reveal a crisping panel on the interior, then microwaving the pizza on the panel. The panel does an acceptable job of making sure that the crust doesn't become soggy - in fact, the underside of the crust is fairly solid while the crust itself is tender. It's a pretty good pizza - if it weren't for the toppings.

Nutrition information aside, this pizza might not seem to have changed much: there are still only 3 pepperonis on the whole pizza (which seems odd - wouldn't you cut a pizza into at least four pieces?), and the sauce is tomatoey without being sweet. Two years ago we guessed that Lean Cuisine had cut back on the sodium in the pizza by minimizing the cheese, but now, not only is there another 130 milligrams of sodium, there are another 20 calories. Neither of those appear to have come from adding cheese, because there's still very little: 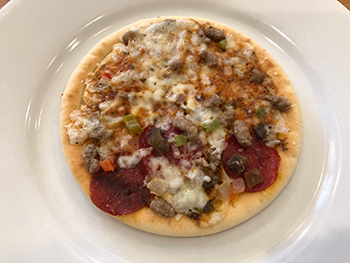 There are a few scattered red and green bell peppers, but overall this is the sort of thing that you would buy from a third-rate sports stadium, with skimpy amounts of toppings, indifferently put together, and uncaringly baked. I remember having pizzas at school - a time far, far longer ago than I care to admit - that were worlds better than this. It sure isn't worth the $2.50 I paid for it at my local grocery store (they're running a "2 for $5" special).

As one panelist described it, "This pizza is deeply, deeply wrong." 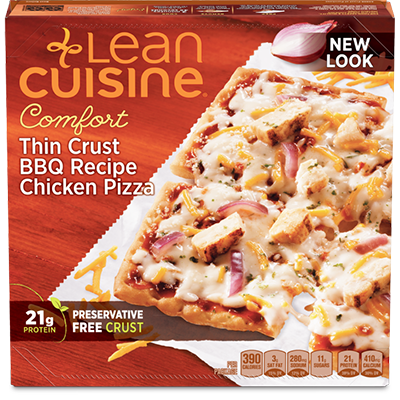 The Thin Crust BBQ Recipe Chicken Pizza (390 calories, 280mg sodium, <1g fiber) seemed much more promising (but then, after that travesty, what wouldn't?).

Back in 2012 we praised this pizza for its "generous amounts of sweet and tangy brown-sugar-and-molasses-based barbecue sauce" and noted that "it could use a little more cheese." A single pizza had 340 calories, 400mg sodium, and 3 grams of fiber. We were perplexed by the changes to this dish.

There seem to be adequate amounts of toppings that are evenly distributed across the pizza, with colorful red onions and orange and white shreds of cheese topping plenty of diced chicken and a barbecue sauce that smells pretty good, just out of the oven.

The chicken is nice and juicy and the onions are sweet. That's the good news.

The bad news is that the crust is "positively floppy," as one panelist described it. Perhaps the "thin crust" description was intended to convey that? We expected something rather crispier.

Worse yet, the barbecue sauce is far too sweet: "cloyingly sweet," "painfully sweet," "that's just gross," said the panel, describing the sauce as having a disconcerting overtone "like somebody put way too much orange juice in the sauce." It's as if Lean Cuisine decided to cut back on the sodium and tried to compensate for the reduction in flavor by making the sauce sweeter. A further mystery is why this pizza now has less than 1 gram of fiber when 5 years ago it had 3. Granted, 3 grams of fiber isn't all that, but where did the other two grams of fiber go?

In short, the Supreme Pizza isn't worth bothering with and the Thin Crust BBQ Recipe Chicken Pizza is simply inedible. Frozen pizza is almost never very good, but you'd really be punishing yourself with these.