It's been ten years and hundreds of products since we first reviewed the Chicken Enchilada Suiza meals from Weight Watchers and Lean Cuisine. While we revisited the Lean Cuisine version in 2010, we'd never gone back to the Weight Watchers version. Since Lean Cuisine appears to have changed its recipe since its most recent review, we thought it would make sense to test them again, head to head. 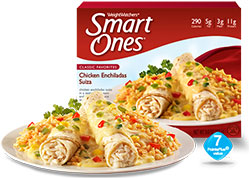 The tasting panel started with the Weight Watchers Chicken Enchilada Suiza. Ten years ago this meal had 310 calories, 3 grams of fiber, and a whopping 730 milligrams of sodium. Nowadays this much sodium would get it left on the shelf, but the good news is that not only are there now fewer calories in the meal (at 290), but they've cut the sodium back to a nearly reasonable 640 milligrams with the same amount of fiber.

That said, once cooked the meal doesn't look anything like the meal on the package. The enchiladas, which go into the microwave less than the diameter of a quarter, come out having split down the middle, and if there was any chicken contained within, we couldn't find it. Just as we discovered ten years ago, the rice (and there is perhaps two tablespoons of it) is dry and chewy and essentially flavorless. The corn tortillas, however, have great texture and flavor, which are unfortunately covered with a sauce like nothing so much as melted Velveeta® cheese. On the other hand, that sauce is indeed "zesty" as described on the box - it's full of green chiles and leaves a pleasant burn on the tongue. We can't recommend this, but if you do decide to eat it, eat it quickly - as it cools it congeals and that does nothing to improve it.

The last time we reviewed the Lean Cuisine Chicken Enchilada Suiza was in 2010, when it contained 270 calories, 560 milligrams of sodium and 3 grams of fiber. Today's version has changed again: now it's 280 calories, 520 milligrams sodium, and 3 grams of fiber. This version separates the enchilada and its sauce from the rice into two compartments, and unlike the Weight Watchers version, there's a reasonable amount of rice here: probably a half cup, cooked. It's only the slightest bit dry but has good Spanish rice flavor: hints of oregano along with diced red bell pepper and corn throughout.

The enchilada sauce is much more like a sour cream sauce than the Velveeta-like goo of the Weight Watchers, with a milder, smoother green chile flavor and a hint of lime. The shredded chicken inside the enchilada can actually be seen and tasted, and while rather dry on its own, with the sauce and the tasty corn tortilla it's acceptable. We'd definitely recommend this one on its own merits.