After today we'll be taking a long break from food delivery services.

We'd been hopeful that such services might be a good alternative to doing your own meal planning and shopping, and on paper they certainly could be if you don't mind paying someone to do the shopping for you (and not paying just a little, but a lot). Other than the cost, the problems we've found thus far have ranged from questionable ingredients (HelloFresh and HomeFresh) to poor instructions (Blue Apron's were especially bad) and all three used far too much oil and salt. Not to mention the truly awe-inspiring amount of packaging: from that standpoint you'd be better off paying someone to go to the store for you. At least you wouldn't end up with a 13-gallon-size trash bag full of cardboard and plastic.

This week's company, Plated, charges $72 for three dinners for two ("All dinners are $12 per person," as their web site says). As with the other three companies, the ingredients arrive in a large, insulated box with multiple freezer packs, but their box is insulated with jute fiber, which is compostable. Instead of precious little cardboard boxes of ingredients for each recipe (HelloFresh), Plated simply places the ingredients in reusable vegetable bags (the type that help keep vegetables fresh) along with the de rigeur plastic tubs and bottles.

The first meal we cooked from Plated was Eggplant Parmesan ("with Beef, Ricotta, and Spinach"). According to the instruction sheet they provide, this contains 710 calories and takes 40-50 minutes. The first thing they have you do is slice the eggplant, place it in a colander, and sprinkle 1/4 teaspoon of salt over it. The instructions claim that "Sprinkling salt over the eggplants before cooking it extracts the moisture, which prevents bitter and soggy slices." If you read our Ask Dr. Gourmet Newsletter, you already know from one of this week's question on salting eggplant that this is rarely necessary - so rarely that I will almost never instruct you to do this.

The next step is to saute the onion in a tablespoon of olive oil (easily three times the amount needed) and brown the 12 ounces of ground beef (that's three servings, not two) with 1/4 teaspoon of salt (that's the second 1/4 tsp of salt) and a total of 1 teaspoon of a mixture of basil, "majoram" [sic], oregano, and thyme to make the sauce. I could swear that this is the same ground beef that we had from Home Chef: gristly and greasy. Canned, crushed tomatoes and a few ounces of fresh spinach is added to this (after you are instructed to "taste and add more salt and pepper as needed" - we didn't), and then set aside in a bowl.

Then the instructions say to flour the (unrinsed but patted dry) eggplant slices and fry them in 2 tablespoons of olive oil, "working in batches and adding more oil as necessary." The eggplant almost immediately soaks up the oil and requires cooking an additional two batches along with 2 more tablespoons of oil per batch - and if you're keeping track, by this time we're up to 7 tablespoons of olive oil for two servings, which alone adds 417.5 calories per serving to the dish. (After cooking the eggplant, one of my favorite steel skillets was blackened, and once again I had olive oil spattered all over my rangetop. The smoke alarm didn't go off only because I opened all the doors and windows.) 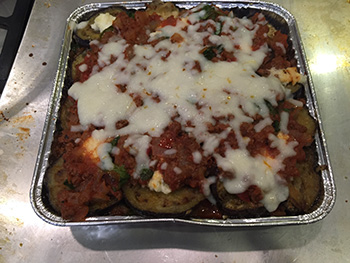 Finally we assembled the dish in layers in a little tin Plated thoughtfully provided and baked it for 8 minutes. After all that mess, was this the rich, savory eggplant parmesan our tasting panel had hoped for? No. "All I can taste is grease and salt," complained one taster. "Is there eggplant in there?" asked another. The overall verdict: "Gross. Can I have some Tums?"

Their Tacos al Pastor was a much simpler recipe: perhaps too simple. Half of the pineapple chunks provided are diced and mixed with sliced onion, vinegar, white sugar, salt, garlic, and achiote paste to make a marinade for 10 ounces of pork chops. More sliced onion is mixed with lime juice, fresh mint, a minced Thai chile, and (undiced) pineapple chunks for a salsa. After ten minutes marinating, the pork and its marinade are transferred to a pan and you are instructed to "sear" the pork for two minutes on each side and then allow the pork and marinade to simmer for another 1-2 minutes or until the marinade is reduced by 1/2.

You are then instructed to remove the pork from the pan and allow it to rest while you add water to the remaining marinade and continue to simmer it until it again reduces by 1/3. The problem we had at this point was the pork: it wasn't cooked. 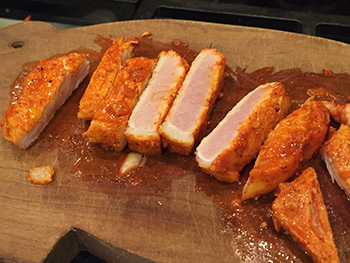 This is appalling, and quite simply, dangerous. We returned the pork to the pan (as per instructions), but rather than simply "toss[ing] to coat," we cooked it gently for another five minutes until the pork was cooked through and therefore safe to eat. Finally you plate the dish (we tried to make it look nice) by placing the pork in the tortillas and garnishing with the salsa. Note in the picture that you end up with large chunks of pineapple and strings of raw onion - and indeed, that's really all you can taste: vinegar, cloying sweetness, and raw onion. My wife and I put this mess down the garbage disposal with great glee. (Plated's calorie count: 510 calories. As cooked: 550 calories, 963 milligrams of sodium, and 15 grams of fat.) 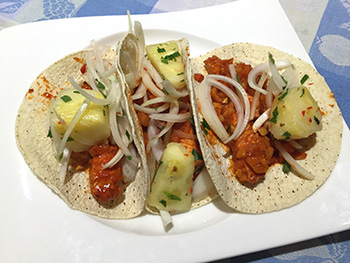 Our last dish from Plated was the Red Lentil Daal with Smoky Eggplant and Garlic Naans. Eggplants are peeled and then diced with tomatoes and onions, then mixed with turmeric, minced garlic, ginger, serrano chile, and 1/2 teaspoon salt, then roasted in the oven (finally! an intelligent use of the oven!). Meanwhile, red lentils are simmered with onion and a spice mix of cumin and garam masala until the lentils are tender. You would think that this would result in a flavorful dish, but somehow even this is shockingly one-note: the vegetables come out bright yellow from the turmeric but have little actual flavor but an overdose of ginger and spiciness from the pepper. The lentils taste of nothing but cumin. Plated says this has 690 calories per serving, and that's fairly accurate, but there's also over 1,000 milligrams of sodium - which just goes to show that salt does not necessarily mean flavorful. "It's not bad," said a panelist, "but it's not very good, either." 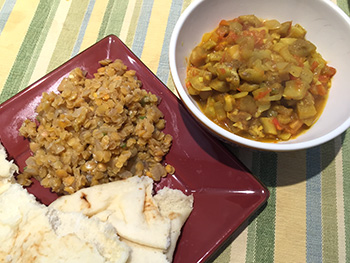 Overall, another disappointment from the food delivery service sphere. If you'd like to make these dishes at home - easier, cheaper, and far more flavorful - try my recipes for Eggplant Parmesan, Tacos al Pastor, and Red Lentils with Smokey Eggplant.