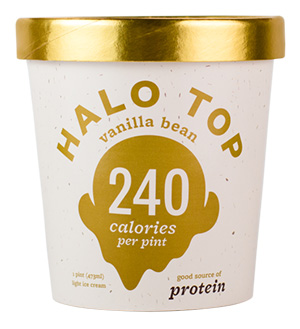 It has been awhile since we reviewed desserts. This is partly because there just are not a lot of new dessert products that come on the market, and as I have said before, most of those products are ice creams or ice cream derivatives. There was a time when the freezer case contained mostly baked goods – frozen pies, cakes and the like – but there has a been a shift to ice cream products in the last 15 years and the ubiquitous Sara Lee and Pepperidge Farm products of the 80's and 90's seemed to have almost disappeared.

As such, when there is a new product it catches my eye and the end-of-aisle freezer case chock full of Halo Top Creamery was hard to avoid. On display were about a dozen flavors alongside the requisite vanilla and chocolate including Oatmeal Cookie, S'mores and Black Cherry.

The numbers looked really good. A half cup serving comes in at about 60 calories. That's really low compared to our previously reviewed favorite Stoneyfield Farms frozen yogurts, which are in the 100 to 120 calorie range for the same serving. This contrasts with 250 calories for premium ice cream such as Ben & Jerry's.

Most of that difference is in the lower carbohydrate content at 4 grams per serving (about 16 calories) and that appears down to Halo Top's use of erythritol, an artificial sweetener. We know that as Swerve sweetener (a product that we reviewed and didn't rate very highly). Erythritol is a sugar alcohol like sorbitol, xylitol or mannitol. These carbohydrates have some of the properties of table sugar (sucrose) but are not absorbed so offer sweetness without calories. (Note that stevia, another "natural" sweetener is also listed in the ingredients but in smaller quantities). (Also note that consuming high doses of sugar alcohols can make you poot so if you have problems with gas, it might be the sugar-free gum or mints you are consuming.) (Also, also note that if you are lactose intolerant, the combination of the sugar alcohol and the milk may be too much for your system.) 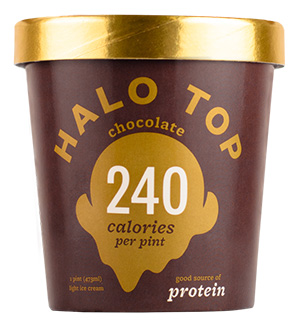 We started with the Vanilla Bean flavor and the first thing you notice is that it has a great fresh vanilla taste. The flavor is really great. This gives way to a different texture than you might expect. Some will be let down by this as the product is not very creamy. It has a more icy texture and the first thing that popped into my mind was, "This is ice milk."

A lot of folks don't know what ice milk is. It is essentially ice cream made with a very high ratio of milk to cream (the opposite of ice cream which is mostly cream). I know because I was raised on ice milk. It was the dessert of choice when I was growing up and was much more widely available back in prehistoric times (I remember the freezer case having almost as many ice milk products as there were ice creams). My mom raised four boys and ice milk was simply cheaper. Look at the Halo Top package and yep, there it is: milk is the first ingredient.

Some folks won't like this and think that it isn't good but, for me, this is comfort food.

The chocolate is not as good as the vanilla flavor because it has a chalky cocoa taste. That makes sense because it is hard to make low calorie chocolate. The erythritol does give this an overly sweet taste, and the ice milk would have been better, in my opinion, using a bit of table sugar. Because the sugar in ice creams is a key component of how the dairy combines with the eggs, this would have improved the texture to be closer to the ice milk of my youth.

If you were raised on Ben & Jerry's, this might be a stretch for you to change to Halo Top – ice milk is, after all a bit of an acquired taste these days. But so is Ben & Jerry's which is, in my opinion, too rich, too sweet, and too creamy.

None of us ate enough to see if it makes you poot. You will have to take that review on yourself.