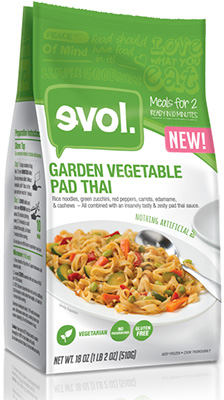 Today marks a first in my over ten years of doing reviews of convenience meals: we had to call the company to clarify their cooking instructions.

"Serves Two" seems to be a growing product segment in frozen foods and convenience meals: I'm seeing more and more offerings from all sorts of companies. This week a panelist brought in two varieties from evol Foods for us to try, noting that the directions for at-home cooking are particularly simple: "So easy even I would have done it before taking the Culinary Medicine classes," they said.

According to the packaging on the two meals we have today, all you have to do is pour the contents of the plastic packaging into a non-stick, 12-inch skillet and cook on medium, covered, for about ten minutes, stirring a couple of times along the way.

This sounds like a great method, especially for something like their Garden Vegetable Pad Thai, which would lend itself particularly well to what is essentially a simmer-sauce-like situation. I pictured a bunch of freshly frozen vegetables along with separately frozen rice noodles and frozen chunks of sauce.

But when we followed the instructions and poured the contents of the bag into the skillet, this is what we saw: 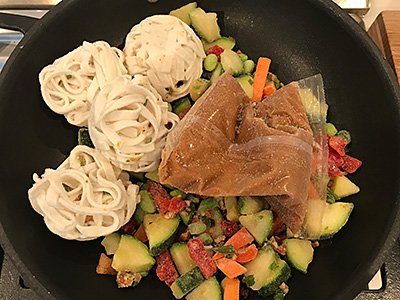 We were honestly a bit perplexed. There's the frozen vegetables and the frozen rice noodles we expected, but then... another plastic bag containing what is obviously frozen sauce. There's nothing about this in the instructions: it just says "empty contents of bag into 12-inch NONSTICK skillet," then cook.

Nothing about when you should empty the sauce out of its separate packet. Before cooking, while the sauce is still frozen into its packet? How are you supposed to get the frozen sauce out of the packet? Or is the sauce supposed to be cooked in the skillet while still in the packet, then emptied into the meal right before serving?

Some panelists thought that the instructions should be followed literally: "they should be idiot-proof," they argued. Others felt the sauce had to come out of the bag before cooking because it would be important for the vegetables and noodles to be cooked in the liquid of the sauce.

As a chef I agreed with the latter, but getting the frozen sauce out of the bag would present a problem even for me: you try peeling frozen liquid out of a plastic bag it's been frozen into. (We ended up putting the bag, unopened, into the microwave on high for a few seconds - enough to thaw the liquid to the point that we could get it out of the bag. Immersing the unopened bag of sauce in very hot water for a few minutes would also do the trick, but would take longer.)

Thus we actually went to the trouble of calling evol Foods directly and spent about five minutes on hold before speaking with a very nice representative who confirmed that the sauce was intended to be removed from its individual plastic bag before cooking. I did warn them that there were likely people who would be literal-minded enough to cook the unopened plastic bag. He agreed that it was something "my grandma would do" and that he would pass along our observations to their quality control department. 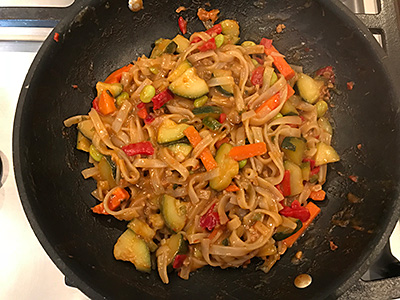 After all that, the meal itself (270 calories, 340 milligrams of sodium, 3 grams of fiber) was underwhelming. Yes, the frozen vegetables remain nicely crunchy (there are zucchini, carrots, and diced red bell peppers). The edamame are firm and the rice noodles are actually al dente. All that is good. But the sauce has just two notes: vinegar and cayenne. No umami notes of cashew or soy sauce, just VINEGAR and a lip-tingling spice. We wanted to like it, but just can't recommend it. Unless you really like vinegar. 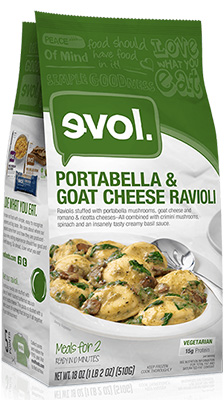 The instructions for the Portabella and Goat Cheese Ravioli (420 calories, 700 milligrams sodium, 4 grams fiber) are exactly the same as for the Pad Thai, but fortunately this is what we saw when we poured the contents of the bag into the skillet: 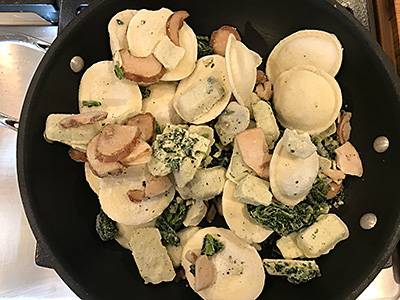 No extra plastic bag for the sauce: just ravioli, sliced crimini mushrooms (criminis are baby portabellos), wads of cooked spinach, and little blocks of what is obviously sauce. This is what we expected to see when we poured the Pad Thai into the skillet!

After ten minutes, we had ravioli in sauce: 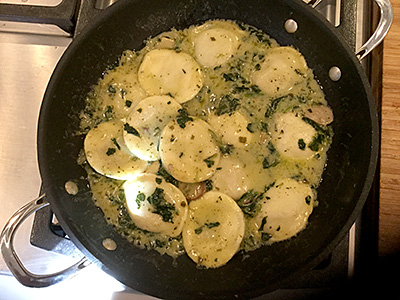 The sauce looks "gloppy," and "greasy," and smells of spinach, butter, and goat cheese ("in that order"). We counted, and each serving contains 7 ravioli, which are impressively well-stuffed. The pasta is al dente and the filling is creamy, with plenty of cheese and mushroom-umami flavor. The spinach adds enough of a bitter note to cut through the buttery, cheesy sauce.

The panel went back and forth as to whether we could recommend this dish. On the one hand, we generally do not even review meals with 700 milligrams of sodium in a serving, so this should never have been considered for recommendation in the first place. That said, its calorie-to-sodium ratio is 0.6, which is actually better than that of the Pad Thai, whose calorie-to-sodium ratio is 0.79. We finally decided that its total fat content of 22 grams, with 11 grams of saturated fat, had to put it out of the realm of acceptability. If you're going to consume that much sodium and fat, make your own - just not out of a plastic pouch.

Read all reviews of meals from evol Foods »