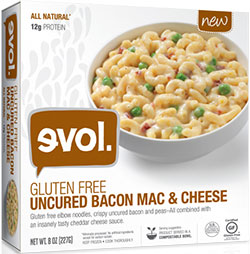 We loved evol. when they first started out., The small company started with a set of delicious bowls and burritos that impressed us with their low calorie density and great flavor. As they have grown they have expanded their line to include flatbreads and 15 gluten free products.

Recently, we selected four of their new mac and cheese dishes and reviewed the first two - a chipotle chicken and a truffle cheese version. We were disappointed. Looking at the packages for these, there was some question amongst the tasters even before heating to the microwave directions. They have far too much sodium and are very calorie dense.

With those poor initial results, we did not have very high hopes for the gluten free versions and started with the Uncured Bacon Mac & Cheese. The pasta was pretty good for a frozen gluten free meal. Rice pastas are usually nothing but gummy and tend to stick together. This pasta has good texture, however, and is not at all too soft. There is not much flavor in the meal, though. The cheese sauce is bland and simply doesn't have much taste.

The taste that it does have comes from the peas and little bits of bacon, which are really all that comes through. That is unfortunate, because the dish isn't all that good to begin with, but the real issue is that it contains a whopping 780 mg of sodium in a very small dish of mac & cheese. (Imagine if the bowl in the image at right were only half full and you'll have a good idea of how small these portions are.)

The portions are very small for both of these meals but a little larger for the Smoked Gouda Mac & Cheese. This smelled promising coming out of the microwave, but it, too, was a bland disappointment. Not much smoked gouda flavor. For being 440 calories and 3 grams of fiber this is a very calorie dense dish. Less sodium than the Uncured Bacon at a barely acceptable 590 mg for the bowl, but none of that saltiness comes through.

We review a lot of frozen meals and I do believe that they are tough to make well. evol. had been pretty successful initially, but their newest meals... not so much. On their mac & cheese they are zero for four.