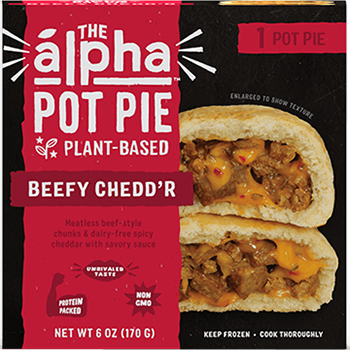 "Plant-based" is something of a contested term in the culinary medicine world right now. On the one hand are those for whom "plant-based" means "vegan" - which is to say, one's entire diet should come from plants, consuming no animal products whatsoever. No eggs. No dairy products.

On the other hand are those (like myself) who use the term "plant-based" as a directive to "eat mostly plants." That is, both land- and animal-based proteins are ok in moderation: a "plant-based" diet should be majority plants - but need not be exclusively plants.

Alpha Foods' convenience foods are "plant-based" in the sense of being vegan.

I always look at the brand's website to get a sense of their corporate culture and story - and Alpha Foods has one of the most uninformative origin stories I've ever seen. There are no names of founders, just what is essentially a mission statement. Only a search into the overall brand told me that this company was started by a founder of Good Karma Foods and a former director of an agricultural lending firm.

Alpha Foods makes a variety of meat substitutes as well as tamales, pizzas, and hand-held pot pies. Today we have two of their pot pies to review. 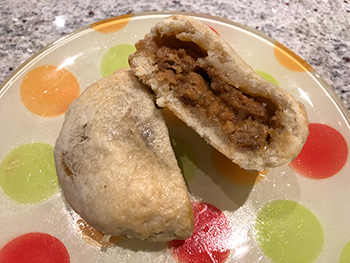 While this could use a little more browning - and there are conventional oven directions so you could achieve this if you wished - this has far better pastry than we expected. In fact, we had expected that the underside would be too slimy to be picked up, but that's not the case: this works as a hand-held meal quite nicely.

The crust itself is soft and yeasty, and if it had been cooked in a conventional oven, would almost undoubtedly have a nice crispy exterior.

The filling "smells of fake meat," said the panel, describing it as "sort of cross between Worcestershire sauce and mushrooms with some Tabasco® sauce." While the package describes the filling as "beef," the panel felt that the flavor was closer to pork sausage, with the same slightly chewy texture of sausage and the zing of spice. That said, the panel reported that it left them with "a fake meat aftertaste," which seemed to be a combination of a metallic, salty taste and a sort of "chewy, brewer's yeast" flavor. 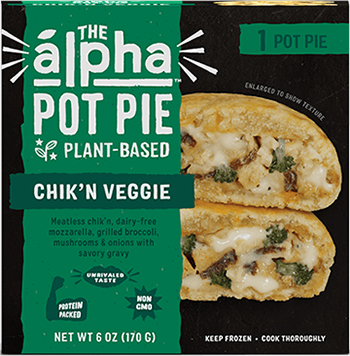 Compared to the package depiction, the actual, fully cooked Chik'n Veggie Pot Pie has more in common with its "beef" cousin than anything that includes vegetables. 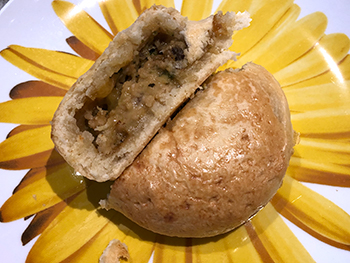 While some of the panel felt the pie smelled of broccoli and onion, we couldn't actually see any vegetables at all. In fact, the overall flavor is more "mushroomy" than the Beefy Chedd'r, with fewer chunks to the included protein but the same odd, metallic/salty aftertaste.

Don't get me wrong: the panel liked both of these and called them "surprisingly tasty," with "good crust."

But a look at the nutrition facts panel reminded us of my often-repeated chef's adage that "it's easy to hide your sins [and make things taste good] with fat and salt." Each 500-or-so-calorie pot pie has 31 grams of total fat - and 75% of the Recommended Daily Allowance of saturated fat for a 2,000-calorie-per-day diet. Fully 279 of the calories in these items are from fat alone. These are great examples of why vegan food isn't necessarily good for you: they're extremely processed - with only 1 gram of fiber each! - and rely on fat and salt for flavor.

For the $5.99 these pot pies cost, you could make an enormous salad with quinoa or brown rice, vegetables, beans, and a vinaigrette and consume fewer calories with far more fiber and flavor - and far less sodium. Don't be fooled by the "plant-based" label: leave these on the shelf.