The first thing that I noticed when unpacking the Home Chef ingredients from the box was the Minor's vegetable base. Minor's is not a household name because it isn't generally sold at retail, but it is widely used in restaurants. Bad restaurants. Any kind of stock that is made by reconstituting a powder, cube, or paste is, by and large, disgusting, but Minor's is the king of disgusting. The emperor of bad.

This did not bode well.

We started with the San Francisco-Style Shrimp Cioppino. The ingredients seemed a bit skimpy - a small onion, a can of tomatoes, and a small bag of shrimp. The preparation went easily enough, but as with so many of the recipes from these delivery services, it calls for 3 pans. Why? You start with one pan to heat water and reconstitute the disgusting Minor's (blech) stock, a second to sauté the garlic and onions before adding the tomatoes and spices, and a third skillet to sauté the shrimp. The last was a complete waste of a pan: the shrimp could just as easily have cooked in the stew.

It was in this third step that I noticed the label on the wine: "white cooking wine." I really thought, "that can't be," but it was. Cooking wine is wine that has had salt added - specifically to make it undrinkable. Tasting the wine, I found out that it was, indeed, salted. "That's just gross," was all I could say.

Cooking the dish to the recipe instructions resulted in a disaster. It calls for simmering the tomato and onion stew for 8 to 10 minutes. This is just long enough to heat everything up and results in a watery, salty mess. There is nothing at all redeeming about this dish and it was so salty that the meal was completely inedible. At first I thought it was the spiciness from the red pepper flakes burning my mouth, but then realized it was the high sodium content causing my lips to tingle. 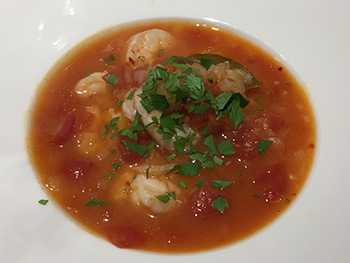 Which brings us to the nutrition information. This is so wildly inaccurate that I can only imagine the folks at Home Chef were drunk on sodium laced cooking wine when they ran the analysis. It claims that the recipe contains 427 calories per serving. That is simply impossible with 3 ounces of shrimp, 2 1/2 ounces of onion, 3/4 cup of tomatoes and some broth.

Likewise, the sodium content reported at 673 milligrams is fantasy. 3/4 teaspoon of Minor's Gluten-Free Vegetable Base contains 630 milligrams of sodium and there were two teaspoons in the small container shipped to us (that's 840 mg per serving in the base alone). Shrimp also contains sodium (about 101 mg in three ounces, according to the USDA Web site) and cooking wine comes in at 364 mg for the two ounces in each serving. Because there just wasn't enough salt in the recipe already, Home Chef sent canned tomatoes with salt (adding another 385 mg).

This is the comparison:

You read that correctly. Eighteen hundred and thirty milligrams! Per person. That's because the tomatoes had sodium in them, the Minor's base has an outrageous amount of salt, and there is added salt in the cooking wine - all of which is unnecessary.

We try hard to not be biased here at Dr. Gourmet World Headquarters. There have been many times when a brand is great, and we go back for another product that is terrible, and vice versa. We were, however, fully prepared to hate the Beef and Cheese Enchiladas. Something about the company's honesty in labelling the dish as having 1,910 milligrams of sodium per serving led us to believe not only would the meal be terrible, but because there was no cooking wine in the package, the folks analyzing the nutrition information were not drunk when they ran their calculations.

Our expectations were fully met. After dirtying a large skillet, a large mixing bowl, a plate, a small mixing bowl and a Pyrex dish (which makes more sense for this than the recommended cookie sheet), we had a big pile of spicy glop that was so salty that it was again inedible. After two bites I flushed it down the garbage disposal.

This is supposed to be home cooking (the name is Home Chef, after all), but this dish is everything that you would get at a chain restaurant like Chili's or Applebee's - cloying enchilada sauce, gristly ground beef, salt, fat (47 GRAMS!), and oh yes, 985 calories of complete junk. 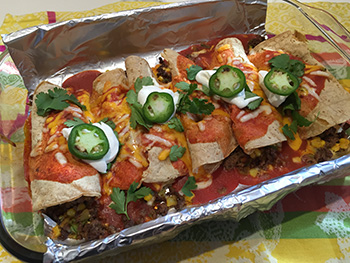 Undaunted, we pressed on with the Rosemary-Cider Chicken. This one reports only 834 milligrams of sodium, which might actually be true since it uses Minor's (blech) Gluten Free Chicken Base at only 540 milligrams in a teaspoon, and mercifully, there is only one teaspoon included. Maybe the people doing the analysis didn't find the sherry cooking wine included in this recipe to be as tasty as the white cooking wine that came with the cioppino, allowing for a more accurate nutrition analysis.

The dish looked promising - apples, butternut squash that had been precut, and chicken breast. 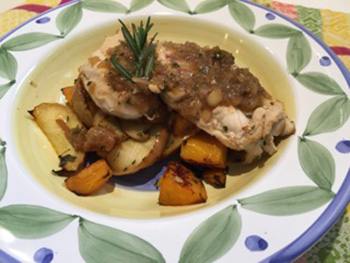 It is the simpler of the three recipes that we tested, requiring a skillet, a cookie sheet, and a plate for the seared chicken to rest upon while making the sauce. It goes easy enough with cutting the apple, mincing the sage and dumping them onto a cookie sheet with the squash and a teaspoon of olive oil. Pop that into the oven and roast for 20 minutes or so.

After that the chicken is seared, set aside while the sauce is made in the pan by adding shallots for 30 seconds; cooking sherry for a minute; and then the cider, Minor's (blech) base, and the rosemary. Stir, return the chicken to the pan and cook for another 8 to 10 minutes. Remove the chicken, add the butter, and you have a pretty decent, albeit too salty, sauce.

Not bad, all in all. It suffers from being too salty and maybe a bit more butter than necessary but this is a quick and pretty easy meal that turns out savory and sweet.

Note that our packages of chicken came with one full chicken breast and two thinner ones, so cooking was not really easy because if you don't know to cook the thick one for a bit longer, you will have thin ones that are tough as shoe leather.

In the end, you should pass on Home Chef. The Minor's (blech) base is a fatal flaw, the sodium content is far too high for flavor and your blood pressure. Save yourself from this delivery by cooking your own versions of these recipes: