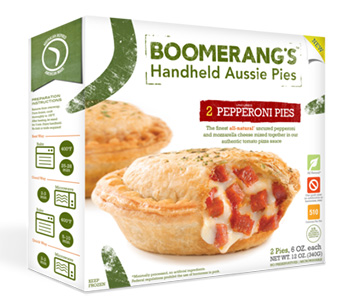 It's been over four years since we last tested handheld pies from Boomerang. One of the first comments we received on the review was that these were not truly Australian pies, and it seems that the owners of the company heard that: they changed their name from "Boomerang's Handheld Aussie Pies" to "Boomerang's Aussie Inspired Pies" (despite the packaging in the picture). We haven't visited them again, more because they came two to a package than for whether they are "true Aussie pies" or not (I've never been to Australia), and we do try to avoid those packages that contain two servings unless they're specifically designed to be a single package for two people.

I'd noted that these pies were appearing on grocery shelves in single-serving packages, but I passed them by for quite a while. Our experience with microwaving the pies, as opposed to baking them in a conventional over for far longer, was so poor that I thought it would be a far better use of our time testing something people were far more likely to eat, given that few people have the access to or the inclination to use a conventional oven at work.

But then I noticed the little microwave icon on the front of the package. Intrigued, I looked more closely. The package states, "Oven quality in just over 3 minutes! Open one side flap to vent while heating in microwavable box." Fair enough. I chose two and brought them in for testing.

As advertised, the inside top of the box (above the top of the pie) has a panel of that grey/silver material that we've seen used for crisping microwaved pizzas. The pies themselves also come in an oval pie tin made of the same material. All very encouraging, but the "just over 3 minutes!" part is misleading: the directions actually call for 3 to 3 1/2 minutes of microwaving followed by allowing the pie to stand in the box for 5 minutes before consuming. That makes 8 minutes, which is more than twice the time advertised. (Yes, there are conventional oven directions on the box, but we did not use them.) 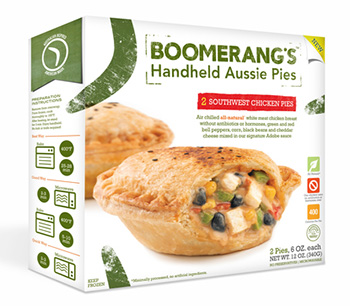 We were initially impressed with the Pepperoni Pie: it certainly smells like pepperoni pizza while cooking, and the pie comes out lightly browned around the edges with just a dime-sized section of the top crust appearing to be a little under done. That top crust smells buttery and of both oregano and basil and is a little flaky, like a pie crust. We cut the pie down the middle and noted that the bottom crust of the pie is a quite solid 3-4 millimeters thick and not flaky at all. "It's more like molded cracker," said a panelist. The filling doesn't look like the picture on the box at all - it looks much more like a mass of tomato sauce. The diced pepperoni isn't really visible, but you do taste it, and how! The panel couldn't decide whether it was the cheese (thoroughly melted, but still detectable) or the pepperoni, but this pie is salty.

"It didn't seem salty at first," they said, "but it grows on you." The sauce itself is a thick, savory tomato sauce that's "more tart than sweet," and the panel admitted that compared to many microwaved pizzas we've eaten, this is pretty good. But additional bites seemed to do nothing but underscore the salty flavor, and despite an initial positive assessment, the panel chose to give this a thumbs down. "The numbers might be good [420 calories, 550mg sodium, 3g fiber]," they said, "but the salt... it's just too much after a while."

With that in mind we turned to the Southwest Chicken Pie, which has fewer calories (350) and more sodium (630mg) but more fiber (5g), presumably because of the vegetables and legumes in the pie.

The crust on this pie comes out much more like, well, a pie: buttery and flaky. Again the crust is lightly browned around the edges, but a little more of the middle is a little under done. Don't take that to mean that the middle is undercooked or cold, though - the insides are hot! hot! hot! and we were glad we sliced both pies down the middle before tasting in order to let them cool to edible temperature.

We'll keep an eye out for other varieties. The problem here wasn't in the execution but in the fillings, so we might hit upon a good one, whether it's a "true Aussie pie" or not.