We've been seeing frozen pizzas from California Pizza Kitchen in our local grocery stores for a while, but we haven't reviewed them because they're all labeled 3 servings. While one or two of those pizzas meet our sodium standards, the truth is that very few people are going to eat only two slices of those small pizzas. Sure, in the ideal world people would only eat two slices and stop, but here at Dr. Gourmet we're a bit more realistic. (After all, in the ideal world you wouldn't be eating frozen meals at all, would you?) 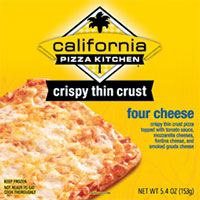 Just recently we spotted the single-serving versions of CPK's pizzas on the shelf at the grocery. While the Sicilian Style had 700 milligrams of sodium, the Four Cheese and the Margherita pizzas had 530 mg and 660 mg respectively, putting the Margherita a little on the high side of what we'd like to see. Still, acceptable levels for pizza. So we brought them in for our tasting panel.

Like other frozen single-serving pizzas, these are designed to be cooked on a cardboard crisping tray in the microwave. Unlike those other pizzas, however, the package lists different cooking times based on the power of your microwave, which definitely makes it easier to cook the product properly (not too much, not too little) the first time. After cooking, they recommend that you allow the pizza to sit in the microwave for two minutes to allow it to cool for "food safety."

There's so much cheese on this pizza that a little of it actually melts down the sides of the tray. It definitely smells cheesy, with fontina, smoked gouda, and both regular and reduced-fat mozzarellas. The tomato sauce is slightly sweet and there's just enough of it to cut through the cheese, of which there's a pretty good amount. The crust is very thin and fairly crisp, and stays crisp - it doesn't get soggy or soft. 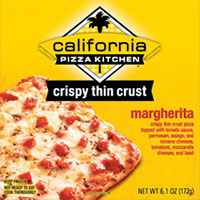 The same crust and tomato sauce are in the Margherita Pizza, which adds diced tomatoes and hefty serving of dried basil to the mix. Again, the cheese is fairly generous and overall, both pizzas have good flavor.

But the panel found them oddly unsatisfying. We couldn't quite figure out what the problem was until one of the tasters remarked that the crust was more like a pita crust than a pizza crust. Then it made sense - these are more flatbread-style pizzas. "Kind of like pizza on a cracker," one taster said.

These pizzas are quite a bit higher in calories than other single-serving pizzas we've seen: the Four Cheese Pizza has 430 calories and only 2 grams of fiber to go with its 530 milligrams of sodium, and the Margherita Pizza also has 430 calories, with more sodium at 660 mg and slightly more fiber at 3 grams. With so many more calories and so much less satisfaction, we have to give these a thumbs down.