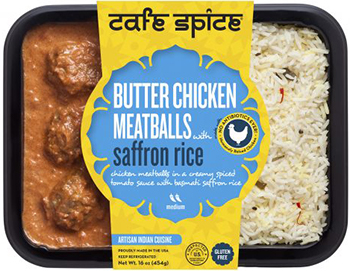 Convenience meals seem to have expanded from the freezer case into the refrigerated ready-to-eat aisle.

I've seen meals from this company, Cafe Spice, at both the Whole Foods Market I frequented in New Orleans as well as at a small organic grocery here in Washington, DC, and in both occasions they were in the refrigerated, not the frozen aisle. In fact, the packaging notes that they can be frozen, but the meals themselves are sold from the refrigerator case, not the freezer case.

I've never brought them in for testing for one simple reason: they're actually two servings.

Long-time readers of Dr. Gourmet's Food Reviews may recall my frustration at finding single-serving meals that seem to fit within our calorie and sodium criteria, only to read the label more closely to discover that what is clearly a package that most people would consume all of at one time is considered 2 servings.

Canned soups are a notorious example: grab just about any can of ready-to-heat soup off the shelf (not a condensed version) and look at the label: you'll see between 100 and 200 calories or so, between 500 and 600 (or more) milligrams of sodium, and some fiber. Looks pretty reasonable until you realize that this 14-ounce can of soup is actually two servings. And who eats half a can of soup? Nobody. (What's even worse is that for a can of soup one serving is 8 ounces. So if you consume one serving of the can, what do you have left? 6 ounces. That's 3/4 of a serving. "Ridiculous," says my wife.)

So the actual portion size for the can of soup is one can - and the true nutrition information is ABOUT DOUBLE what's on the nutrition label. Doubling the calories is one thing, but it's doubling the sodium that puts most serves-2-but-is-actually-1-serving meals over the top: 400 calories in a dish is one thing, but over 1,000 milligrams of sodium is "right out," as my wife would say.

And this is why you haven't seen me review anything from Cafe Spice until today: their meals are clearly intended to be one serving, although they are labeled as 2 servings. Who's going to eat half of the package and put it away? Nobody, that's who. Once you multiply out the calories and sodium, nobody should be eating their meals. Or at least most of their meals.

Here's a rundown on the dishes we won't be reviewing:

The two meals we have today have much more reasonable nutrition numbers, even after you adjust for the multiple servings in each package. 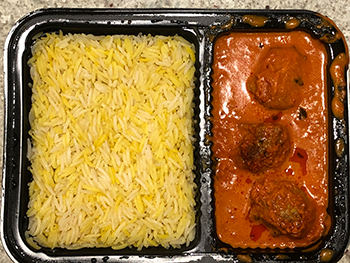 The basmati rice in this dish is a very long grain rice that's perfectly cooked and faintly aromatic with scents of saffron and cardamom. Some of our panelists felt the rice might be a tiny bit dry, but conceded that this perception might be because the grains are so very distinct - this rice doesn't stick together at all. Further, we felt that the rice is intended to be served as a base for the meatballs with the sauce and not to be eaten on its own.

The four half-dollar-sized meatballs (you can only see 3 in the picture) are pretty impressive: dense, tender, and savory. What's missing is the utterly smooth, almost ground-cardboard-like texture of meatballs made from processed meat byproducts: these seem to be made of actual ground chicken - and taste like it.

The sauce is tomato-based with an assertive cilantro and ginger flavor, with plenty of savor from the cream and butter and just a little bit of kick from the spices. While this dish is labeled "medium spice," we found it pretty tame: "lively, but not spicy," said the panel.

The Coconut Chicken Curry with Saffron Rice was also pretty impressive and had the same amount of (not very much) spice despite its 2-pepper rating. 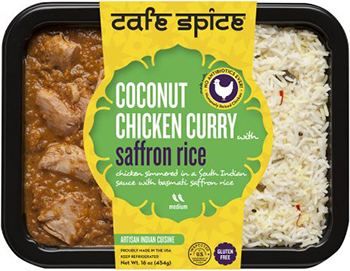 The rice in this dish is identical to that in the Butter Chicken Meatballs dish: tender, savory, and as distinct as can be (note that the package image from the Cafe Spice website does not depict saffron rice, but that's what we had in our package). No real complaints there with regard to flavor or texture. 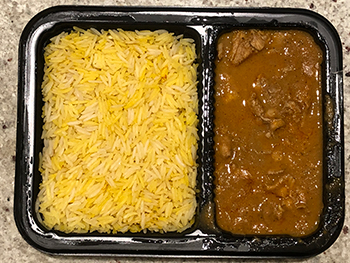 The Coconut Chicken Curry was not what our panel expected: we could find little coconut flavor in a dish that seemed more founded on tomato and onion. Neither I nor the panel pretend to be experts on all variations of Indian curries, however, so we could not fault the dish for that alone: instead we evaluated the dish without preconditions. It's actually a very savory curry: nice and thick, with flavors of cumin and black pepper and touches of clove and cinnamon. Again, while this is marked "medium" spice, we found it rather tame, with a background zing but nothing overtly spicy.

The chicken in this curry is clearly actual pieces of chicken cut into pieces - it's not processed meat by any stretch of the imagination. It's juicy and tender, just as you'd hope and expect.

To be honest this dish reminds me of some fantastic curries I've had at a little Indian restaurant in Las Vegas, Mantra Masala, which serves some of the most delectable sauces I've ever had. (Have the mussels.)

Both of these dishes from Cafe Spice are good, but substantial curries that should probably be saved for a dinner meal rather than a lunch meal. Neither of them are particularly heavy on the vegetables, so I would suggest that for a more well-rounded meal you serve these with a side salad.