Two weeks ago we reviewed our first food delivery service, HelloFresh. The food wasn't bad, but some of the ingredients were questionable (chicken stock concentrate?), the meals were overly salted, and the food cost could have been cut somewhat by providing single servings of protein rather than 1 and a half. In all, if you've got the money to spend to have someone shop for you it might - might - be worth it.

This week we placed an order with Blue Apron. They say that they called themselves Blue Apron "because chefs around the world wear blue aprons when they're learning to cook." They also state that "We take great care to ensure that our recipes are suitable for beginner chefs and experts alike." That wasn't the case with HelloFresh, as you may recall.

As with HelloFresh, we received a large box filled with an incredible amount of packaging. The premeasured liquids, such as soy sauce or oils, are all packaged in tiny plastic screw-top bottles, much like the stuff you might carry through the security line at the airport. Fresh spices come in plastic tubs, as do the breadcrumbs used for one dish and the chunk of butter for another. Other items, such as walnuts or flours, come premeasured in tiny plastic ziplocks. Each of the three recipes come with a small brown paper bag labeled with the recipe name that contains the small extras such as the flours, oils, or spices. A bunch of carrots came in its own plastic bag while a beet remained loose in the box. The proteins were all shrink wrapped much like those from HelloFresh.

Add to this the large box it all came in that was lined with a large plastic insulation bag and also contained two large freezer packs. I really should have kept all the packaging and taken a picture of it because the sheer amount of plastic was pretty appalling.

We chose to test the fish dish first: Seared Cod & Udon Noodles (that's a PDF of the instructions we received). It's always a good idea to read the instructions carefully all the way through to get an idea of the timing of the recipe, and as I read I became more and more concerned. This dish instructs you to add salt and pepper, in no specific amount, no less than four times - and the dish already calls for 3 Tablespoons of soy sauce. The soy sauce alone will contribute over 1,300 milligrams of sodium to each serving. Why would you want to add more?

The second excessively used ingredient was olive oil. You start with 2 teaspoons of olive oil (already twice as much as you would need) to saute the mushrooms, then you add ginger and green onions and add 2 teaspoons of sesame oil to continue sauteing. Why not just saute the mushrooms in the sesame oil? The cod, all 10 ounces of it (looks like this company also likes to provide an excess of protein), is then pan-fried in another 2 teaspoons of olive oil. Granted, a good portion of that oil ends up spattered all over your range, but the smart way to do this would have been to use 1 teaspoon of oil and pan roast the fish in the oven, where the mess could be contained.

Other than (not) salting the food at every turn, we followed the recipe as written until we got to cooking the cod. As a chef I just could not stand by and cook these poor defenseless pieces of fish for 3-5 minutes on one side and then another 2-3 minutes on the other. The average filet of cod just will not stand up to that length of cooking (unless you want to end up with the equivalent of fish jerky), so against my better judgment we cooked it for the listed minimum of 3 minutes on one side and about 1 and a half on the other. Our panel then tasted the resulting meal (I could not; this dish is not gluten-free). 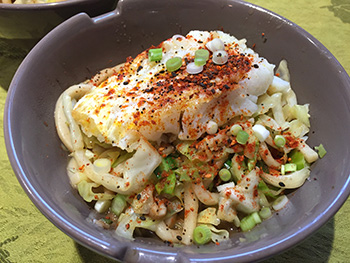 The panel's reaction: A dish with "good Asian flavor," that was "plenty salty enough." It "could use more of the spice mix" said one panelist, who likes their meals pretty spicy. "Really filling," they all agreed. I should hope so, as the nutrition breakdown per serving for this dish (including the olive oil, which is not included in the delivery box) is as follows: 636 calories, 17 grams of fat, 1479 milligrams of sodium, and 6 grams of fiber. If we assume that the four instances of salting adds only 1/8 teaspoon per serving, that still comes out to 1,770 milligrams of sodium per serving. Ouch.

The second dish we made was Chicken Schnitzel (PDF). This is basically chicken breast pounded very thin and breaded with plain flour and unseasoned breadcrumbs and served with potato salad. Once again I was dismayed: other than 1 Tablespoon of shallot and approximately 1/2 Tablespoon of lingonberry jam per serving, there is no vegetable included for this dish. Yes, technically potatoes are vegetables, but as a starchy vegetable the meal is incomplete without a non-starchy vegetable. Indeed, this is basically protein wrapped in starch (the breading) served with starch.

The very first instructions are simply unacceptable. They call for you to boil fingerling potatoes and then peel them while they're hot. Fingerling potatoes are called so because they are approximately the length and thickness of a finger. Peel them while hot? Why, other than to burn your fingers, cut yourself, and remove the fiber (which is mostly in the skin of a potato)? There are few occasions when peeling potatoes is really necessary: when making gnocchi, for example. (Dear Blue Apron, if you think I'm going to peel fingerling potatoes, you're crazy.) Almost worse, you're to boil those potatoes "in a medium pot with a big pinch of salt" (their emphasis) and this is followed by another four instances of salting between the potatoes and the chicken. Couldn't they just add a measured amount of salt?

The instructions call for you to pound the chicken to "1/4 inch thickness," then bread it by dipping first in flour, then a beaten egg, then the breadcrumbs. After that you (again) pan fry the chicken: in a singularly non-instructive bit of instruction, they write, "in a medium pan (nonstick, if you have one), heat a thin layer of oil on medium-high until hot."

Remember the part where these instructions are supposed to be suitable for beginners? Exactly what kind of oil are you supposed to use? What is "a thin layer?" Can I use any kind of oil? I've got some 30-weight here, will that do?

I used about 1/3 cup of canola oil and once again ended up with significant oil spatters all over my rangetop. The instructions call for you to cook the 1/4-inch-thick pieces of chicken for "3-5 minutes per side, or until golden brown and cooked through." In the event, the chicken was cooked for about 1 1/2 minutes per side, as anything more would have yielded yet more jerky (this time chicken jerky, of course). You then plate the piece of leather atop of the potato salad and garnish with a truly miserly amount of jam. 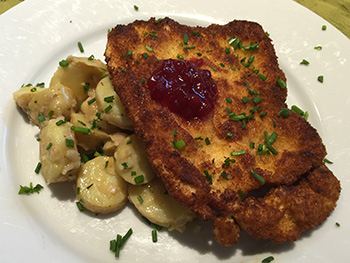 The panel gamely tasted this as well and immediately noted that there wasn't enough jam for more than one or two bites. (Some panelists never got to taste the jam.) The potato salad was not as acidic as we expected it might be due to the amount of shallot and vinegar it called for, and actually it added a nice, tart counterpoint to the sweetness of the jam and the umami of the chicken. After a few bites, however, "it gets monotonous." With 613 calories, 6 grams of fat, 790 milligrams of sodium (we did add 1/8 teaspoon salt to each serving of potato salad), and 6 grams of fiber, the numbers might not be too appalling but the flavor simply wasn't there. Worse yet, in the course of making the dish we dirtied 5 plates, 3 bowls, a 4-quart saucepan and a non-stick pan, not to mention the oil all over my poor, long-suffering stove.

We finished our Blue Apron saga with their Center-Cut Pork Chops (PDF). This is served with a warm beet, carrot, and arugula salad.

At this point I was starting to wonder if Blue Apron had something against using the oven, as the first instructions are to peel the included beet and boil it in water for 20 minutes. This means you end up with at least one hand looking as if you were auditioning for Lady MacBeth, not to mention the amount of red water that may or may not end up splashed all over your range. Why not just wrap the beet in foil and roast it: the skins slides off easily, no (or little) muss, no fuss. Bizarre.

While the beets are boiling, you are then to peel and slice the carrots and saute them in 2 teaspoons of olive oil, another waste of olive oil. (The carrots are actually salted twice - once about halfway through cooking and then again when finished.) The pork chops are fried in 2 more teaspoons of olive oil (after being salted, of course) and again the instructions call for cooking the chops far more than is necessary: while the instructions call for 4-6 minutes on the first side and 3-5 for the other (adding butter on the second side), given the chops we received (no, not particularly thin) the more reasonable instructions would have been 4 minutes on the first side and perhaps 2 on the other.

After the chops are cooked, you allow them to rest on a cutting board. You are then to add to the pan, with the melted butter left over from cooking the chops, the cooked beets, carrots, and walnuts, then add the arugula at the last minute and stir until it is just wilted. Slice the chops and serve: 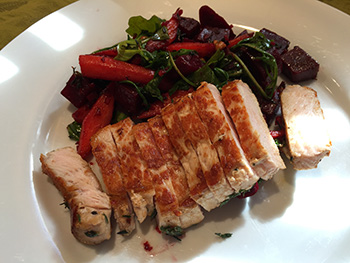 The average cost of ingredients for 2 servings of three meals, if you bought those ingredients from my local Winn-Dixie, is about $4.72/serving. Blue Apron advertises that it's $9.99 per serving, so you are paying $5.27 per serving for someone to shop for you.

Is this worth it? Again, I don't think so, but you might. At least Blue Apron doesn't use fake ingredients.