Has it really been almost five years since we last reviewed a frozen meal manufactured by Whole Foods? Back in 2013 we reviewed their 365 Everyday Value Organic Mac & Cheese and Vegetarian Lasagna, but by and large we've avoided reviewing their products - mostly because of Whole Foods' reputation for higher prices, but also because of the higher sodium content in some of their products.

I was browsing their frozen foods section to find something to review for today when I noticed their burritos. Surely we had reviewed their burritos, I thought. Sometimes it seems like we've reviewed just about every widely-available brand of burrito there is, or at least those available in single servings that also fit our criteria. But these were a surprisingly reasonable $1.69, with equally reasonable numbers, and no, we've actually never reviewed a burrito from Whole Foods.

First up was the Bean & Rice burrito: vegan, but not gluten-free, with 320 calories, 580 milligrams of sodium and a fairly impressive 5 grams of fiber. ("That's what using brown rice will get you," remarked a long-time panelist.) Like most microwave burritos, they are to be wrapped in a paper towel, microwaved for a minute or so, turned over and cooked for another minute, then allowed to sit for one minute before eating.

Also like most microwave burritos (with some notable exceptions), these split down the side when cooked, spilling their contents and making the burrito difficult to hold in the hand - which you must admit is sort of the point of a burrito. 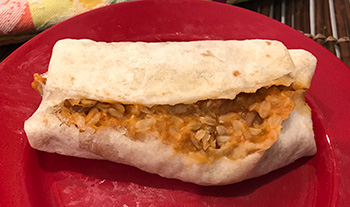 We cut the burrito in half and assessed the filling-to-wrap ratio: "Not bad," said the panel. "But we've seen better." There's a thick layer of folded tortilla (a soft and tender flour tortilla, to be fair) that takes up about half of the interior diameter of the burrito, meaning there might be quarter-cup of filling. That filling has a smooth, creamy texture: the beans seem to be refried beans, not whole beans, and the rice is cooked to the point of softness. There's really no texture to the filling at all.

There's very little flavor, either. The very faint aroma is mostly of onion powder, with a tinge of tomato paste and celery. The earthy flavor of the pinto beans comes through, but again, gently: this is a burrito with no spiciness to it whatsoever - "If it didn't have onion in the ingredients, we would call this GERD-friendly," said a panelist. Another summed it up: "It's not bad, but it's not going to blow your socks off." I suppose you might say it's worth the $1.69 you'll pay for it.

In some ways the Bean & Cheese Burrito was worse, and in some better: worse, in that it split even more messily than the Bean & Rice Burrito, and certainly its numbers aren't quite as good, with 260 calories, 490 milligrams of sodium, and only 3 grams of fiber (as a panelist noted, adding the cheese seemed to mean taking out some of the rice, which reduces the fiber content). 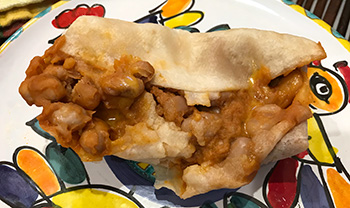 On the other hand, this does have more flavor than the Bean & Rice burrito, but "that's only because of the cheese." The beans are whole and firm, giving the burrito more texture, but the panel agreed that this is essentially the identical flavor profile (with a nearly identical ingredients list): savory beans, a little onion powder and celery, a little tomato, but no spice. "No zing. And a whole lot messier." This one is better in terms of flavor. When most people will microwave their frozen food lunch, we really can't recommend either because of the splitting.

A final note: to retrieve product images I went to the 365 Everyday Value by Whole Foods website. On the website they list the price of these products as $1.49 each. Same product, but at my Whole Foods Market in New Orleans (Arabella location) they charge 20 cents more. Why?

Read all reviews of meals from Whole Foods »