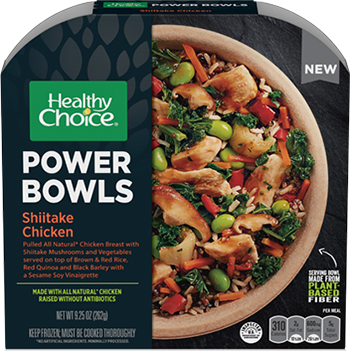 These Power Bowls are a great concept that really taps into a few nutrition buzzwords. Think about it: "bowls" are a big thing right now, what with "poke bowls" and "rice bowls" and the health halo effect of putting a burrito in a bowl being healthier than a burrito in a tortilla. (It's true in the sense that when you cut out the giant tortilla you're cutting out a good 300 or so calories, but that doesn't mean that tortillas are necessarily bad for you in and of themselves.)

With the Healthy Choice Power Bowls, first you have a base of whole grains that includes quinoa (buzz word!), brown and red rice (brown rice is great, but RED rice must be even more special), and black barley (ooh, another special color!), and a vegetable mix that includes kale (buzz word!), chard, and spinach.

Then Healthy Choice's bowls vary by the type of animal protein and a medley of vegetables or legumes, plus a sauce for flavor. From a manufacturing standpoint it's got to make a ton of sense: most of the bowl is the basic grain/vegetable mix, which because you buy more brings down the per-bowl cost, then add the minimum specific protein/vegetable/sauce for each variation.

The problem (you knew there would be one) isn't the overall concept, but that the different varieties sometimes suffer from being poorly thought out in terms of the individual dish. 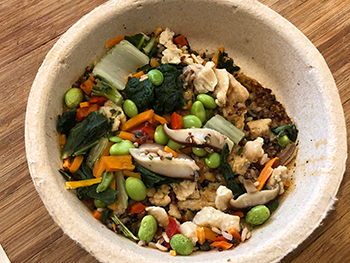 The chicken is fairly tender and the bok choy - what we could find of it - was a softer than we'd like but still crunchy. The scattering of edamame add more texture than flavor, while the carrots add more sweet flavor than texture. The sauce ("precious little of it," quipped a panelist) has a fine, unobtrusive sesame and soy flavor that's well balanced by the bitterness of the greens and the umami of the chicken. The quinoa/barley/rice mixture is really just a slightly nutty-tasting vehicle for the rest of the dish.

Overall, it's nicely balanced in flavor and would be a good addition to your lunch options.

The BBQ Seasoned Pork Power Bowl (350 calories, 600mg sodium, 8g fiber) is not well thought out at all. 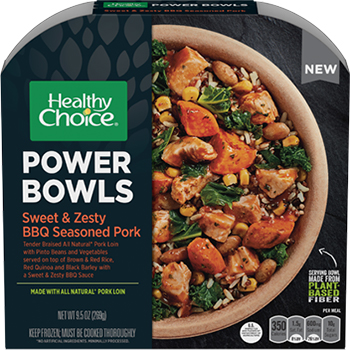 After our tasting and discussion, the overall opinion of the panel was that "this bowl was built on paper."

To quote a panelist at length:
"You just know there's somebody at corporate who said, 'Put some pork in there and a nice, vinegary barbecue sauce. Then balance the sour with sweet potatoes and corn and some kidney beans. That'll be great.'" 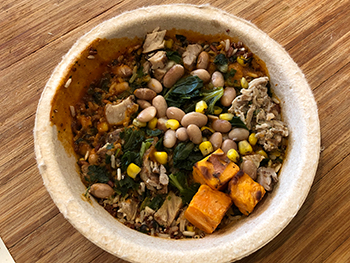 Sounds great when I describe it, doesn't it? The sad thing is that it could have worked.

The pork is a little dry, but according to the packaging it's a pork loin, so no surprise there. It's a challenge to cook pork loin well and microwaving it won't do you any favors.

There's plenty of the barbecue sauce, but the "sweet and zesty" description isn't accurate: there's far more "zesty" (read: vinegary with strong overtones of mustard) going on than "sweet" with that sauce, and if the idea was to balance that out with the sweet corn and the sweet potatoes, then as one panelist said, "Perhaps they should have included more than three 3/4-inch cubes of sweet potato in the entire dish."

"And more than a scattering of corn would have helped, too," added another.

This has all the hallmarks of something that was planned on paper but wasn't actually cooked and tasted by real people: great concept, but poor balance leading to a dish overwhelmed by one flavor.

There was a collective groan when a panelist pointed out, "You know how you get that awful sour taste in your mouth after you throw up? That's what this reminds me of." Enough said: leave the pork on the shelf and choose the Shiitake Chicken instead.