That's true, of course, but it is especially true with baked goods. Most muffins and quickbreads have a lot of added sweeteners, usually in the form of granulated sugar. That comes with added calories.

Over the years there have been artificial sweeteners that have offered hope. Saccharine isn't very good for baking. The sweetness doesn't hold up well when heated and this is even more true with aspartame. Because Equal (and related products) is nothing more than a two amino acid protein, it rapidly breaks down with cooking. 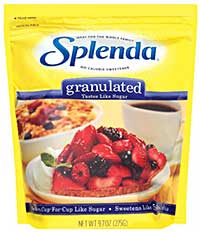 With the introduction of Splenda (sucralose) about ten years ago, the first good alternative came on the market. About 6 years ago we extensively tested the granulated Splenda in baking with good success. It is more expensive than sugar, but it's calorie free and the granulated version measures one for one like sugar. There is a great flavor with little of the aftertaste of some sweeteners (including sugar).

There is a lot of controversy around artificial sweeteners, with a fair amount of internet myth surrounding all of them, especially aspartame, and to some extent with sucralose. We decided to test stevia products and have spent the last 4 months looking at what works best. The sweetener is refined from the Stevia rebaudiana plant and comes in a number of forms. One of the more common on the market has been drops and we ruled that out because of the volume that sugar (and to some extent Splenda) adds to batters.

We tested Truvia first and had poor results. The company makes a packet style sweetener, like Sweet and Low or Equal, but nothing with the volume of sugar like granulated Splenda. We worked using a packet to equal a teaspoon of sugar. This was expensive and did not make for a very good batter. There was less volume and the baked muffins and breads were dense and without the "crumb" that one wants in quality baked goods. Varying the amount of Truvia did not help. The company does have a Truvia / sugar blend, but we did not test that based on the added calories. 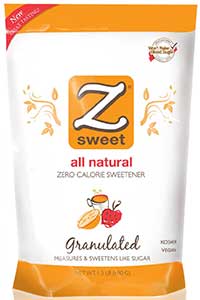 Next up was Z-sweet. This is a product that is like the granulated Splenda: used one for one as you would measure granulated sugar. This product wins hands down compared to any other we tried including sugar. The muffins were light and airy with great flavor. It measures easily and tastes great, with good sweetness but no aftertaste. In repeated tests with different muffin recipes and quickbreads it held up perfectly.

Z-Sweet is not a stevia product, however, but erythritrol, a sugar alchohol. Unlike xylitol, sorbitol, and other sugar alcohols used in food products, this one does not cause gas and gastrointestinal side effects.

In the middle of our testing we remembered that the Swerve company had sent us an erythritol product a few months back. Swerve is based here in New Orleans and is also an erythritol product. They contacted me several months ago and asked if they could send me a sample for review. I'm happy for people to send us items to review - as long as they understand that if we don't like it, we'll say so.

Our samples arrived in a metal lunchbox decorated with the Swerve logo. In addition to two bags of Swerve - one granulated and one powdered-sugar style - the package included a set of measuring cups and spoons, a small spatula, and a brochure. "Measures cup-for-cup just like sugar!" says their website.

We first tested Swerve in a batch of carrot muffins. The recipe calls for baking the muffins 12-15 minutes, but after 15 minutes the muffins were still wet and raw on top. After 25 minutes they were nearly done to the touch (solid), but after allowing them to cool in the pan, when we cut them in half we discovered that they were still raw in the middle.

I'll admit that at the same time we were also testing another substitution - using 2 teaspoons of canola oil in place of the 2 tablespoons of the light spread. Ordinarily we only test one change or new ingredient at a time, but the truth is that when my wife started making these muffins to test the canola oil substitution, she didn't discover until the last minute that we didn't have any Z-Sweet on hand. So she used the Swerve, reasoning that "measures cup-for-cup just like sugar" would mean just that.

As you might guess, both she and I were more than a little perplexed with the underdone results. Surely substituting a liquid with one volume (2 teaspoons of canola oil) for another with more volume (2 tablespoons of spread) couldn't make the muffins behave as if they contained MORE liquid?

That couldn't be right. Baking is a fairly exact science - it's more like chemistry than art (although chemistry can certainly be an art).

We debated the cause until Morgan read the brochure included with our testing package and discovered that when baking with Swerve, "lower temperature and/or shorter cooking times could be required when baking with Swerve" and "pastry or cake flour may lend the most favorable results in your baking applications." She scanned it so you can see for yourself: 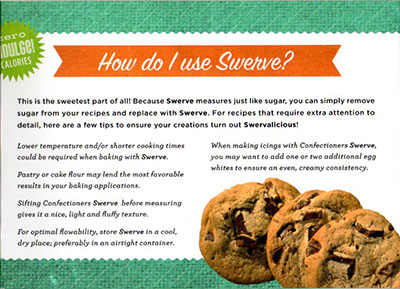 Hmm. So... it doesn't measure and bake like sugar?

Later testing of the same carrot muffin recipe using Z-Sweet instead of Swerve and performing the same canola oil/spread substitution yielded perfect results. I am not sure why the Z-Sweet product works so well and the Swerve does not.

Most incriminating was that a few days later my wife was doing the same substitution testing for another muffin recipe and found herself about 1/6 of a cup short of the right amount of Z-Sweet. She added Swerve to fill out the measure, and... once again the muffins were raw in the middle.

Sorry, Swerve. We can't recommend it for baking and the winner, hands down, is Z-sweet over anything tested, including sugar.