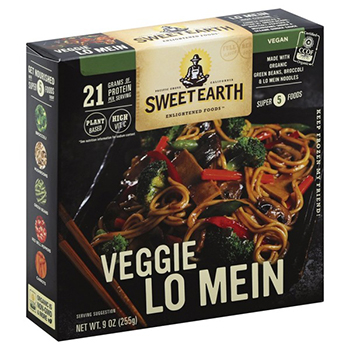 This week we are back with Sweet Earth Foods and more of their plant-based meals. The company started out strong with tasty burritos, but lately Sweet Earth Foods' bowls have been leaving us cold. A case in point is our most recent review with them of Cauliflower Mac and Pad Thai: The first had an oddly-flavored sauce while the second, the Pad Thai, hardly seemed to have any sauce at all. Not well planned from Sweet Earth Foods.

Today we start our tasting with a Veggie Lo Mein, which has some impressive stats at 470 calories, a nearly equal amount of sodium (at least numerically) at 510 milligrams, and 4 grams of fiber.

The panel's first reaction to this dish was, "Wow! That's a lot of veggies." There are lots of green beans, some diced red bell pepper, and a few medium-sized broccoli florets here, along with a few slices of mushrooms and what look like bamboo shoots.

Wait, no. Those aren't bamboo shoots, the panel realized: those thin rectangles are seitan (a wheat-based meat substitute). "They taste sort of meaty - like mushrooms," they reported.

On the bright side, the sauce has a lovely soy, sesame, and ginger scent and a bit of spice that gradually builds up to a bit of a zing on the front of the tongue. Overall, the panel enjoyed the dish: "It's tasty," they said. "Lots of veggies."

The numbers for the Chinese Chik'n with Black Bean Sauce aren't nearly as good as those for the Veggie Lo Mein: it has far more sodium per calorie, at 640 milligrams of sodium for 330 calories and 3 grams of fiber.

Compare the package with the reality of this dish:

What's good: this has a deep scent of black bean paste, soy, ginger, and garlic, which is reflected in the sauce.

What's not so good: while this does contain brown rice, the rice is definitely overcooked to the point of chewiness and the amount "seems skimpy." The things that look like pieces of green beans in the above image are actually pieces of very thick asparagus - and we never found a tip of asparagus, contrary to what's on the package. Some of the pieces were fairly tender and crunchy, while others were woody and stringy.

If you look closely you may be able to spot a few tiny broccoli florets. What few there were in the dish were massively overcooked, as were the bits of red bell pepper. Neither contributed much in the way of flavor.

The panel didn't know quite what to make of the chik'n - a vegan meat product made with soy protein. Panelists described the chunks of chik'n as "rubbery" and having an "overprocessed" texture, but others said it taste "somewhat" like chicken and found the texture "really smooth" but unobjectionable. Larger pieces seemed to fare rather better in the microwave, as smaller pieces became unacceptably hard.

The final verdict is best summed up as follows: "It's okay... but I wouldn't eat it again."