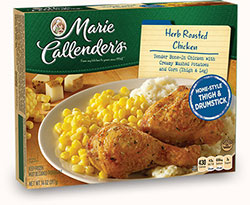 We're continuing our foray into chain-restaurant-inspired frozen foods. As we promised last week, today we have two items from Marie Callender's. The brick-and-mortar restaurants will likely be familiar to those in California, where they have 62 locations along with several other locations in Idaho, Nevada, Utah, and Texas. They specialize in large portions of comfort foods like pot roast, fried fish, fettuccine Alfredo with chicken, burgers, and an all-you-can-eat salad buffet. (And pie, my wife tells me, who grew up in California. Lots of pie.)

We started today's review session with the Herb Roasted Chicken, which according to the package has 430 calories, 650 milligrams of sodium, and an eminently respectable 5 grams of fiber. This is two pieces of dark-meat chicken, a leg and a thigh, and the meal smells like, well, roasting chicken as it's microwaving. There's a slight aroma of rosemary to lend credence to the name. The chicken itself is cooked with the skin on, which helps keep the meat moist and fairly flavorful, although there's no real herb flavor - just roasted chicken (which the tasters tell me is just fine). It's served with utterly smooth mashed potatoes, not grainy but perhaps a little pasty, and a side of slightly overcooked corn with a touch of butter. Pretty darn good, says our panel. A little boring, but for what it is, it's pretty good.

The problem I have with this meal is that there's no vegetable - corn is a grain, after all, and thus a starch, not a vegetable. In checking the Marie Callender's Meals web site I noticed that the Nutrition Information listed for this meal is not the same as what's on the package. The web site says it's 470 calories and 680 milligrams of sodium, not 430 and 650 respectively. The lack of a vegetable could be remedied by serving it with a side salad (or at least a piece of fruit), but the combination of being at the very high end of acceptable sodium (if the web site is correct), no vegetable, and its flavor panel of "pretty good," I have to recommend against it. There are other chicken meals that will have less sodium and more flavor (and might be cheaper than $3.50 apiece). 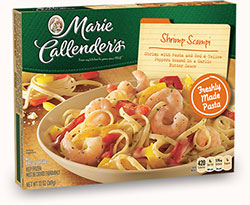 I did have hopes for the Shrimp Scampi. As you know if you've read our reviews for a while, good fish and shellfish meals are few and far between in the frozen world - it would be nice to have another meal to recommend.

At first this meal looks promising. There are easily a dozen small, uncooked shrimp along with a generous portion of red and yellow julienned bell peppers in a bed of linguine. After the initial 4 minutes of cooking, we took the meal out to stir it (per the instructions) and noted that the pasta and shrimp were floating in quite a bit of liquid. The instructions say to cook the meal for another 1-2 minutes, but with our 1200-watt microwave we kept it to 1 minute to avoid overcooking the shrimp, followed by 2 minutes of standing in the microwave to finish cooking. Even after all that, the meal has a watery, vaguely yellow sauce dotted with bits of parsley. "It smells like it tastes when you put way too much dried garlic on something," said one panelist.

The good news is that most of the elements of this meal are good: the pasta is not as al dente as we like, but not mushy; the shrimp are not overcooked; the bell peppers aren't crisp, but they do add nice hits of flavor. The problem is the sauce: not only is it too thin, it has virtually no actual garlic flavor. If you spoon up the sauce alone you may catch a hint of butter and parsley - but that flavor disappears with a mouthful of any substance. Worse yet, it leaves a lingering chemical aftertaste. Too bad; at 420 calories, 570 milligrams of sodium, and 5 grams of fiber, a sauce with some flavor would have gotten this meal a thumbs-up. Leave this in the freezer case and choose a frozen fish or shellfish meal we've liked from this list.