There aren't a lot of frozen meals on the market with fish as the main course. This is understandable since microwaving fish is a tricky prospect. This is, however, a problem if you eat frozen dinners too often (which a lot of folks do). I was pleased to see the Salmon with Basil, but I wondered how well it would turn out. 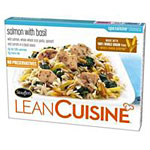 I once worked on some recipes for a patient who did shift work. You know, it's pretty easy for me as a doctor to say, "Eat fatty fish 3 times a week," but if you are working in the middle of the night and your dinner is always coming from a microwave, this is more difficult. So I know the challenge for Lean Cuisine.

Most of the meals that I created were rice, risotto and pasta dishes with flaked fish such as Saffron Salmon Risotto. In this convenience meal, Lean Cuisine serves small chunks of salmon with whole wheat orzo in a light basil sauce. Overall this turns out OK and good enough for your freezer.

We cooked this carefully, and I suggest you do so too. Heat it in 1 minute increments and stop the minute the food is hot. By doing this the salmon is not dried out. It is almost impossible to avoid overcooking fish in the microwave, so this works fairly well. The orzo is in a light basil sauce that is OK and is served with a lot of matchstick veggies that also get slightly overcooked.

All in all, a fairly good TV dinner. Not the caliber of Michael Angelo's, but it is salmon and the numbers are not bad at 220 calories, 4 grams of fiber and 6 grams of fat thanks to the better quality pasta. There's still too much salt at 660 mg sodium. 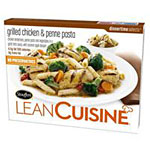 The Grilled Chicken and Penne Pasta comes in a larger box than most Lean Cuisine meals. This is because it includes dessert in a separate part of the tray. Even so, the whole meal is only 330 calories. The box reports this as "30% more food." It's lower in sodium at 580 mg than the generally too salty products from Lean Cuisine (still too much though). Amazingly, it has 6 grams of fiber and only 4.5 grams of fat.

Good numbers and a larger meal are OK - but only if it's something worth eating. It is, but barely. The garlic herb sauce is fairly tasty with only the slight hint of a chemical flavor that many Lean Cuisine products have. The chicken is actually not overcooked and even has the taste and texture of a chicken breast. Veggies are crisp and not overdone. This would be far enhanced by using whole wheat pasta which would give the dish more flavor and texture.

The Caramel Apple dessert is fair at best. Essentially canned pie filling with a bit of caramel flavor, it'd be better for Lean Cuisine to give you more of the main course so you could just have a fresh apple later. 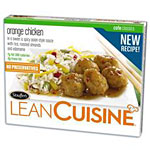 When the Orange Chicken comes out of the microwave it looks a lot like the dish you might order from a Chinese take out. It's as good or better than that. While this isn't saying much, the dish is good enough for you to consider having in your freezer. Low in calories, at only 300, there's too much sodium at 580 mg (high, but still a LOT less than what you'll get from the take out place). The sauce is sweet and spicy just as the package advertises and the small pieces of breaded chicken are OK (although the breading is a bit gummy).

The rice is not overcooked but, as always, this would be better served with brown rice. Not just healthier, since there's only 2 grams of fiber in this dish, but there'd be both better flavor and texture than with the bland rice served with this dish.

All in all three good, but not great, meals from the folks at Stouffer's. That may be some sort of record for us here at Dr. Gourmet.