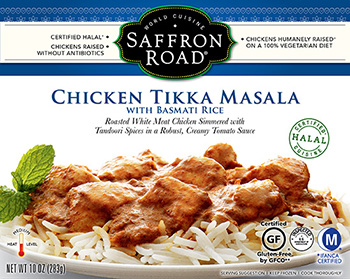 We have reviewed hundreds of products in the last 10 years and Saffron Road is a brand that we have generally felt good about. Lately we have been revisiting some of the meals previously tested because we are finding that they are often reformulated: sometimes there have been slight changes, but other times there's been a major overhaul. This week are two from Saffron Road that we would like to have been better.

First up was their Chicken Tikka Masala with Basmati Rice. This is labeled as "medium heat level" on the front of the package, along with multiple other claims of being gluten free, certified halal, humanely raised chickens that are not given antibiotics and all natural (there is more on the package but I grew weary of typing).

After following the fairly standard microwave instructions, the result is a bit of a mess. The first flavor that hits the tongue is salt. There are 690 milligrams in the single serving dish and it tastes like every one of those milligrams is in the first bite (and the second and the third). This gives the tikka spices a harsh, acrid flavor. The texture of the sauce is rich and creamy, and the chicken is quite tender for a microwave meal, but by themselves both are hard to eat because the flavor is so very strong. The dish has two compartments, with the second one containing the basmati rice which is dry and a bit tough. Thinking that maybe they intended to have the two eaten together, we tried that - and sadly, it really doesn't help.

If you consider that this is 310 calories and only 2 grams of fiber, the dish fails on every level except the total calories. Too salty, not enough fiber, strong bitter flavors, and dry rice. Looking back at our review in 2013, there have been some subtle changes in the Nutrition Facts label, and the chicken was certainly better in this version, but the sauce is much worse for some reason. We gave it a pass then and think you should still leave this one on the shelf.

Next up was the Enchiladas al Chipotle with Mesquite Black Beans and Garlic Rice. There are a lot of front of package claims that are similar to the Chicken Tikka Masala, but maybe not as extensive. The Nutrition Facts label was more promising, however, at 430 calories, 510 milligrams of sodium and a respectable 6 grams of fiber.

There are good and bad parts of this dish. The black beans are excellent with a terrific wood smoked flavor that is as good as any we have had from any manufacturer. If Saffron Road released these beans by themselves, we would be all-in and they would make a great accompaniment to fish or chicken. Moving down the scale is the garlic rice. This is a bit dry but with good garlic flavor (not enough to save the rice, but a nice attempt).

At the bottom of the scale are the two small enchiladas filled with cheese, topped with a thin enchilada sauce and corn kernels. This is just a watery mess. The corn tortilla is soggy and that's not how you want your enchilada. The corn kernels have the flavor of frozen corn that is long past its prime (which is hard to accomplish amongst all the other strong flavors). These are, in the end, a very small step up from Taco Bell. It is interesting that this is a very different meal from the one we tested two years ago. The rice is better and the beans are much, much better, but the enchiladas themselves are actually worse. We would hope that Saffron Road will go back to the drawing board.