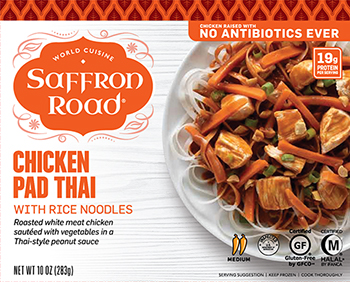 It's been long enough since we last reviewed a meal from Saffron Road that they've completely changed their packaging. That's why the Chicken Pad Thai caught my eye. I couldn't remember reviewing it, and in the hopes that it was a new product, brought it in for tasting. The bad news is that we did review the Chicken Pad Thai almost two years ago, but the good news (sort of) is that it was pretty bad. Might Saffron Road have improved the product along with the packaging?

It appears so (420 calories, 640 milligrams sodium, 1 gram fiber). Instead of the "exotic peanut sauce" that in 2017 we described as "...true if you think of 'exotic' as Tennessee and 'peanut sauce' as barbecue sauce", our panel says this is "definitely not barbecue sauce" with a "tongue-tingling peanut and ginger flavor." The extremely dry chicken we had encountered earlier has also been improved: now it's perhaps a little bit dry, but still savory enough to cut through the sweetish pad thai sauce.

Add this to impressively al dente white rice noodles (how they made them resistant to turning into mush or fracturing into bits is evidence of alchemy) and some still-crunchy julienned carrots, and you have a dish that's just as tasty and far, far better for you than the pad thai you'll get at your local Thai restaurant. Change that thumbs down to a thumbs up for Saffron Road's Chicken Pad Thai. 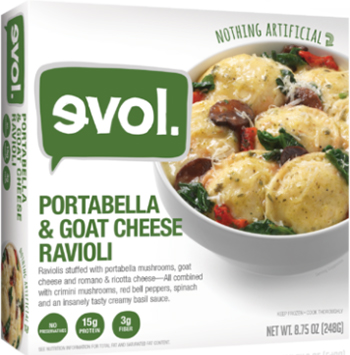 In March of last year we reviewed evol Food's Portabella and Goat Cheese Ravioli - but in their 'serves 2' packaging, which is cooked on the stovetop. We gave it a thumbs down mostly due to its higher sodium content, at 700 milligrams per serving, cooked, although we noted that the fat content certainly wasn't where we would want it to be.

Today's numbers for a single serving frozen meal are a little different, with 390 calories, 670 milligrams of sodium (a bit high, but not egregiously so considering the number of calories), and 3 grams of fiber. On the other hand, like the 'serves 2' package, this has 20 grams of total fat and 11 grams of saturated fat - which is 55% of the recommended maximum daily level of saturated fat for a person consuming a 2000-calorie-per-day diet.

The 'serves 2' yielded 7 raviole (ravioli?) per serving, while today's single serving contains 6 of the 1.5-inch-by-2-inch ovals. As with the other packaging, these are al dente despite their trip through the microwave and impressively well stuffed with cheese and mushrooms. Again, today's single serving dish appears to be almost identical to the 2-serving dish, with a sauce today's panel (who had not tasted the 2-serving version) termed "greasy looking" at first.

Upon tasting the panel amplified their review of the sauce to "rich and creamy" ("but still full of too much butter") and noted that the butter and cream-based sauce has a "solid spinach flavor" punctuated by the savor of the sliced crimini mushrooms and the sweetness of the softly crunchy diced red bell pepper.

We still couldn't quite get past the fat content, however. For today's serves 1 version, with slightly fewer calories and a little less sodium than the serves 2 version, the panel felt that this could be OK if it were regarded as a splurge meal and not something eaten regularly. "A thumbs up, but with caution," they said.