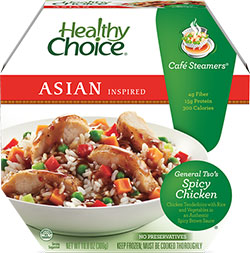 Spicy foods seem to fare better as frozen meals than many other foods. Mexican, Indian, and some Asian foods come to mind, all of which have been well-represented in the green check marks we use to designate positive reviews. So General Tso's Chicken, traditionally a very spicy Chinese dish, seems a good candidate for a frozen meal.

Every Chinese restaurant's version of General Tso's Chicken is a little different. What I'm used to seeing is a simple dish of chicken with tiny red Chinese peppers - extremely spicy ones - served with a brown sauce and maybe some sliced green onions. Healthy Choice's version differs from what I'm used to seeing in one important way - there are vegetables in this meal. Peas, diced carrots, and red and green bell peppers are all well represented along with the sliced green onions. In this instance Healthy Choice's steaming method works well - the (white, unfortunately) rice is not overcooked and the green onions and carrots are still crunchy, lending the dish some texture. Even the chicken is fairly juicy.

The down side of this dish is that the sauce is more sweet than spicy - although there's enough spice for me to recommend that those with GERD pass this up. (There's just the smallest bit of afterburn on your tongue.) If you're looking for the same level of spice that you can find in your corner Chinese restaurant, you won't find it here. General Tso's Chicken this is not, but with 300 calories, only 500 milligrams of sodium, and 4 grams of fiber, it's better than what you'll get from takeout. 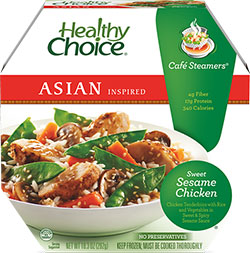 Our next "Asian-inspired" meal was the Sweet Sesame Chicken. Like the General Tso's Spicy Chicken, this has good numbers: 340 calories, 330 milligrams of sodium (wow!), and 4 grams of fiber. This is a fairly simple dish of chicken, snow peas, carrots, and mushrooms in a sesame sauce. The carrots are cut into thick matchsticks yet still somehow manage to be limp - how is it that the diced carrots in the other meal were still crunchy while these larger pieces are not?

And that really sets the tone for this dish. The chicken is dry. The snow peas are utterly limp. The mushrooms are only visible as small brown bits of mush. And while the sauce smells like sesame, it tastes like nothing so much as brown sugar. Not to mention more white rice - but at least that is acceptably cooked.

If you had to choose between the two, definitely take the General Tso's Spicy Chicken. But better to choose a different frozen meal altogether.