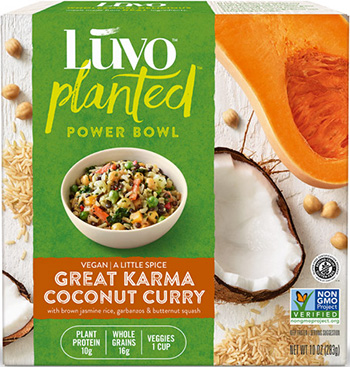 It's been almost four years since we last reviewed a product from Luvo Foods. Back in 2014 we reviewed just 4 products from them, with only a 50% success rate. Of the two that received a thumbs down, however, only one was because of (lack of) flavor - the other we thought was fair but not worth the $5.99 asking price. Interestingly, those two meals, the Nine Grain Pilaf (with beef) and the Whole Grain Penne Pasta (with turkey meatballs) don't seem to be manufactured any longer.

The company now has three types of frozen meal products: the first continues to be their "cook in a pouch" variety, while the other two are bowls: apparently one type includes "responsibly sourced proteins" (that may include land animal protein) while the other they call "Planted® Bowls" that are both vegan and gluten-free. Today we had one from each of the bowl types, starting with their Great Karma Coconut Curry Power® Bowl (330 calories, 390 milligrams sodium, 9 grams fiber).

It's always encouraging when the product uses brown rice - it seems more likely that the company isn't just trying to appear healthy. Still, after this many frozen meals we also know that there are no guarantees. We put it in the microwave for the recommended 4 minutes and waited.

As it cooked the panel perused the ingredients list, noting that the company chose to use agave syrup in this dish. They also used potassium chloride, a salt substitute, along with table salt. Interesting.

This dish comes out of the microwave with a light, creamy coconut and curry scent. It's a colorful dish, with bright green garbanzos (yes, there are green garbanzos), vibrantly orange julienned carrots, lighter orange chunks of butternut squash, and darker green bits of kale. We mixed it up and discovered that the lower layer is the brown rice - cooked with black lentils. The coconut and curry scent is borne out in the savory, but not-too-sweet flavor - it's softly curried, with little true spice despite the jalapenos listed in the ingredients: there's just the slightest tingle on the tongue. The garbanzos are firm, but not crunchy, and give the bowl nice texture. It's a bit soupier than we'd like, however, and the rice is thus a little overcooked. All in all, the panel agreed that even non-vegans would be happy with this. Thumbs up. 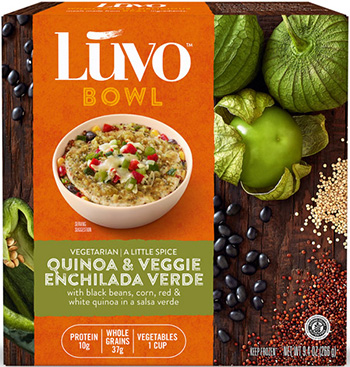 The Quinoa & Veggie Enchilada Verde bowl was the real eye-opener of the tasting session. First of all, this has 16 grams of fiber. Sixteen! That's over half of your Recommended Daily Allowance right off the bat, to go with 290 calories and 360 milligrams of sodium (and gluten-free). Both of these bowls have impressive numbers, to be sure.

This has an enticing, rich scent of lime and tomatillo, and it actually lives up to its promise. There's "a ton" of yellow, almost crunchy corn, which is bright against the dark brown of the black beans, the rust brown of the red quinoa, the green of the diced tomatillo and the bits of red bell pepper. Overall, the sweet corn dominates that first bite, followed by the tart tomatillo, hints of cilantro, and then the savory, earthy black beans.

Along with the corn, the black beans give the meal great texture: "They taste like they were made from dried beans, not canned," said a panelist. "Great Southwestern flavors," said another. While this dish is spicier than the Curry bowl, our panel described it as having "just a little afterburn."

The only drawback - and the panel insisted that some might not consider it a drawback - is that the corn tortilla that tops the dish becomes so soft with cooking that it comes apart more like a layer of polenta than a tortilla. The panel didn't mind because it distributed the sweet masa corn flavor throughout the dish, but to my mind tortillas probably shouldn't break down quite so readily. As one panelist put it, "Your mileage may vary."

Even so, the dish got a unanimous and enthusiastic thumbs up, even in the face of the $5.99 list price. "I've paid more than this for worse burrito bowls," said a panelist.

New Orleans locals, please note: I found today's meals in our local Winn-Dixie, where they had a $4.69 price tag. Luvo's website lists all their meals as still being $5.99, so bear that price cut in mind if you go looking for today's meals.