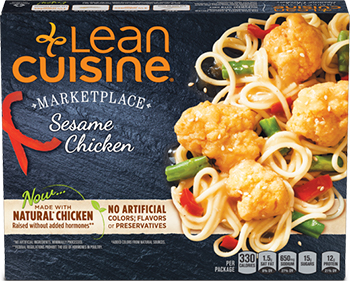 When we first started doing these Food Reviews back in 2005 or so, convenience meals just weren't very good. Unlike nowadays, when it's unusual to get something truly awful, when we first started doing reviews it was most often a question of bad versus very bad. At best most things were just okay, and truly good convenience meals were few and far between. Compare this to today, when I'd say the vast majority of what we review is at least okay, a fair number is pretty good, and some is really good.

It's an indication of how far the market has come, and Lean Cuisine is a great example of this. As I recall, back in 2005 Lean Cuisine dominated the convenience meal market, with Weight Watchers and Healthy Choice close behind. In the first few years of Food Reviews, seeing a Lean Cuisine box for the day's tasting occasioned quite a few groans and the attitude of "okay, how bad is it going to be?"

It's just not like that anymore. While we aren't exactly excited about reviewing more Lean Cuisine products (all in all, we've reviewed close to 100 of their products already), the Lean Cuisine packaging doesn't elicit the same dread that it once did.

This little retrospective has been brought to you by the first item in today's Food Review: Lean Cuisine's Sesame Chicken. Although the packaging has certainly changed, this doesn't appear to be all that different from the Sesame Chicken we reviewed circa 2005: it's spaghetti pasta with vegetables and chicken in an Asian-inspired sauce. We originally gave it a positive review for its inoffensive flavor and its ~300 calories, 680 milligrams of sodium, and 5 grams of fiber. 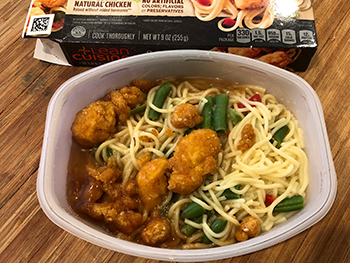 The 2019 version (330 calories, 650 mg sodium, 2g fiber) still has spaghetti pasta, but instead of the whole wheat pasta in this original dish, this is now plain white pasta, and it's easy to tell: it's mush. "Not a little mushy, but a lot mushy," according to a panelist.

The vegetables have been limited to cuts of green beans, which taste fresh and have a good crunch, and there are a few dots of red bell peppers (mainly for color; you can't taste them). The sauce is just a little sweet (that's the plum sauce in the ingredients list), with notes of sesame and soy sauce, and it's not offensively sweet, which is impressive, as so many of these sauces tend to be obnoxiously sweet.

Unlike the original, the chicken in this dish is breaded. On the one hand, the chicken nuggets are tender and flavorful, but on the other hand, as the panel noted, "You're basically eating chicken-flavored breadcrumbs." The breading is far thicker than it should be, and the smaller bits of chicken are essentially fried breading.

In 2005 we would have given this meal a thumbs up: decent numbers, inoffensive sauce, moderately flavorful breaded chicken nuggets, crunchy vegetables. On the surface it's good. But we now know that frozen meals can be far better than that, and we certainly don't have to put up with mushy pasta. Thumbs down on this one. 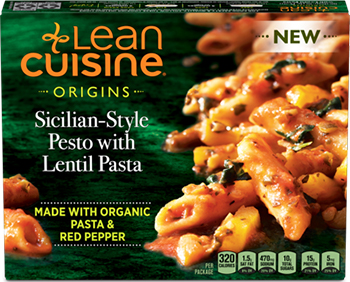 The Sicilian-Style Pesto with Lentil Pasta is new to us (320 calories, 470mg sodium, 5g fiber), and the panel was particularly interested in it because the pasta is billed as "lentil pasta." A look at the ingredients, however, reveals that the pasta is actually made from both lentils and wheat flour - it's not gluten-free. 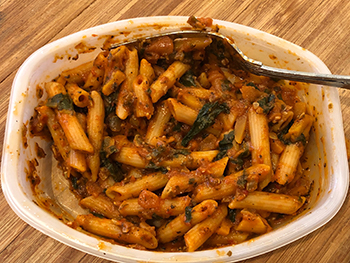 The bad news is that the sauce doesn't seem to be anything like I would expect Sicilian Pesto to be. After this tasting I looked at a fair number of different recipes online that are labeled "Sicilian Pesto," and while they can certainly vary, those recipes closest to this dish make it seem that at least one version of Sicilian Pesto includes tomatoes, anchovies, red bell pepper, golden raisins, and capers, giving it a flavor profile that's strongly umami, with savor and sweetness from the raisins and sweetness and tartness from the red bell pepper and capers.

None of those recipes say anything about the sauce tasting like brown-sugar-sweetened carrots in a tomato sauce with a hint of bell pepper - and that's what this Lean Cuisine meal tastes like, while smelling like nothing so much as dried oregano and dried basil.

We can't recommend either of these meals. The good news is that there are plenty of other frozen convenience meals that are far, far, better. And in the past decade we've reviewed quite a few.