Last week we tested two Naan Pizzas from Tandoor Chef and gave them two thumbs up. When I passed the frozen foods aisle at Whole Foods and saw that they had the other two varieties of Naan pizzas, I seriously thought about passing them up. 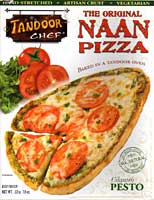 All too often we find a great frozen meal, only to have our expectations shattered when we try another meal from that company. Consistency is just not frozen foods' strong suit, and Tandoor Chef is no exception. Their Vegetable Pad Thai was terrible and their Tikka Masala was good but an incomplete meal and not worth the trouble. On the other hand, the Naan pizzas were great, and frozen pizzas are just not that good very often. Could the proverbial lightning strike twice (or rather, four times)?

This time we started with the Cilantro Pesto pizza. This has a bright, flavorful cilantro pesto sauce with a hint of zing. With cilantro pesto it's easy to go overboard and end up with an almost soapy flavor, but there's no evidence of that here. This pizza comes with slices of Roma tomatoes that also have kept their flavor through the freezing and cooking, along with a generous amount of mozzarella cheese. Once again the crust, cooked by placing the frozen pizza directly on the oven rack, has a crisp underside and soft, yeasty inside. More good stuff here. 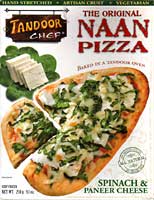 Given that we'd had three good ones out of four, I was ready for the Spinach & Paneer Pizza to be less impressive. Paneer is a low-fat cheese that doesn't melt well - how is that going to work on a pizza?

It's clear that the people at Deep Foods gave this one some thought, however, as the pizza has thin slices of paneer over the shredded spinach which are then topped with mozzarella. The paneer adds a hint of its own unique flavor to the more familiar spinach/mozzarella combination. Plenty of cheese and their great Naan crust.

These pizzas have been so good that I think I might buy some Naan and try making my own pizzas with them. Have any of you tried that? If you have, comment below. I'd love to know how it worked out.

One last thing. Last week I mentioned saving the other half of the pizzas for lunch the following day. I actually had them for breakfast and they were, as you might expect, just as good as regular pizza is the following day. Breakfast of champions.